Why even climate change needs a good narrative | Science | In-depth reporting on science and technology | DW | 29.10.2021

Why even climate change needs a good narrative 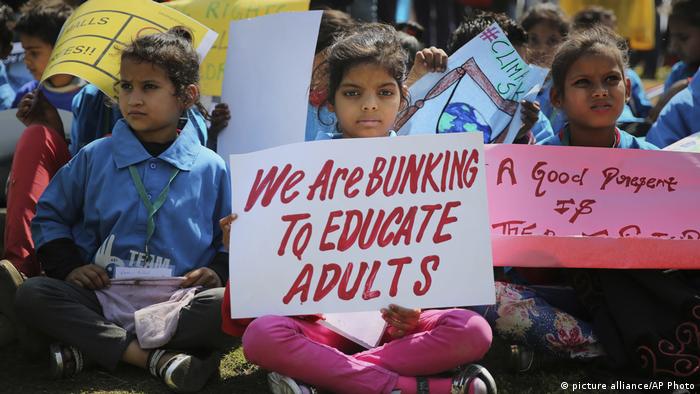 Children have found their own narrative around climate action

What happens when you put a climate scientist and a science fiction writer in the same room? It turns out they get on like a planet on fire. They have more in common than you may think.

Stan Robinson the writer, who has penned three trilogies and 12 other novels, including The Ministry for the Future, as well as nonfiction.

Both have been getting to know each other's work.

"To be honest, Stan's Ministry for the Future was a bit too close to home to feel like fiction," said Otto during a livestream hosted by Klimafakten.de and presented by DW. "The science might be a little bit exaggerated but really not much, if at all."

It's all science that scientists really talk about, and the institutions are also true to life, said Otto. Plus it got personal — Otto saw herself in the book as well.

"The lead character often feels powerless, and working with the United Nations institutions does make you feel like that," she said. "But it's not a dystopian novel; it's utopian, so it would be fantastic if we got to where Stan's book is very soon!"

There's no higher praise, perhaps. But then, Robinson's work is known for his meticulous research. The science is close to his home as well — Robinson's wife, Lisa Howland Nowell, is an environmental chemist with the US Geological Survey.

"I'm interested in the scientific institutions," said Robinson. "They are a hard topic for a fiction writer because they involve group work, whereas fiction usually concentrates on characters. "But we need reports from the cutting edge of what the sciences are doing, which is what Angry Weather is about."

They walk a fine line within their chosen "genres."

There will be people out there who think scientists should stick with the science and that their opinions are not welcome (and Fredi's opinion is clear and simple: "The solution is stop burning fossil fuels!").

Or some may think science fiction authors have no business writing about realities like climate change. Entertain us, don't bore us!

But how can you handle a topic that gets into every facet of contemporary life without blurring the lines somehow? Chances are: You can't not blur the lines.

"To make science useful, you have to tell it within a narrative. You need to find the things that you can say from a scientific point of view and which are relevant to the questions that decision-makers are facing," said Otto.

Can books save the world?

And it's difficult to find that balance, given that climate change is a global thing, but many decisions can be made only at a smaller, local level.

There's also the small issue that most average folk don't read scientific reports unless they are required to or they are politicians. But if you're a politician and you're in direct conversation with your electorate, yet your electorate hasn't read the science, how can we expect any meaningful action on climate change?

For Otto, it all comes down to your personal experience. So, when people experience an extreme weather event and the scientists are able to show how climate change contributed to that event, she believes it changes the way people think.

"We have managed to change at least part of the conversation about the weather and climate change. There's quite some way to go before it leads to action, but we are at an important first step," she said.

Sci-fi is 'reality slapping you in the face'

So, can science fiction — books, movies, podcasts — help? Robinson shakes his head, no. Or perhaps it's a "No, not necessarily."But don't make the mistake of calling science fiction niche, as this writer did.

"Romantic comedies are an escape for middle-class citizens who are worried about reality. And science fiction is reality slapping you in the face. It's the realism of our time," said Robinson. "It's not at all niche. And that's becoming more and more true as we enter into the climate change era and people get more aware of it."

"I am frustrated by the lack of action," said Robinson — but, he added, there has been change.

"There's been an immense amount of progress since I began writing about climate change around 2002, so it's never good to tell the narrative as if things aren't changing because they are changing quite quickly, especially given the trajectory and the inertia of civilization at large. Climate change is now the overriding story of the 21st century, and that wasn't true 20 years ago," Robinson said.

Credit to a generation of scientists

That change in the narrative, said Robinson, is an accomplishment of the scientific community. Otto, he said, is part of a giant collaborative project of an entire generation of climatologists, environmental scientists and science in general.

"Climate change itself is something that no individual human can register or be aware of — it's a scientific fact. You have to see all the data, run it back through history, process it and then come to conclusions that no individual could have figured out on their own," he said.

Friedericke "Fredi" Otto and Kim Stanley Robinson spoke at an online event hosted by Klimafakten.de, a German-language online magazine, on October 3, 2021. The event was supported by DW and the UK weekly magazine New Statesman. And Johannes Wissmann of FLMH Studios provided technical production. It was presented by DW Senior Science Editor Zulfikar Abbany.

Sustainable fuels are seen as key to making carbon-neutral flying possible. But there are some major hurdles preventing these cleaner alternatives from getting off the ground.

The Turkish parliament has ratified the Paris Agreement on climate change more than five years after Ankara first signed the deal. The move comes in time for next month's UN Climate Change Conference in Glasgow.