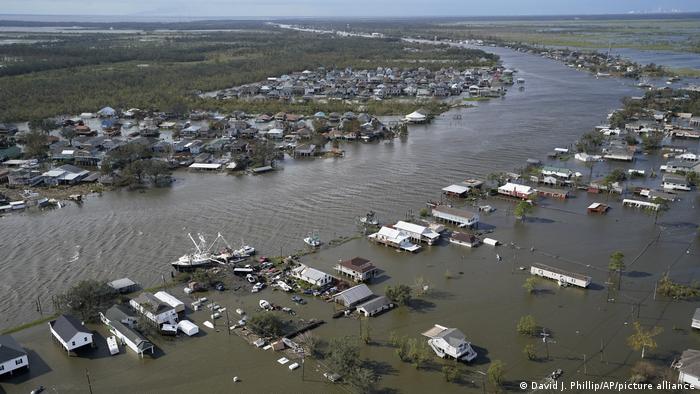 The most expensive weather disaster in 2021 was Hurricane Ida, which hit the eastern US in late summer

A tally provided by humanitarian organization Christian Aid put the cost of the 10 most expensive weather disasters of 2021 at $170 billion (€150 billion).

From deadly Hurricane Ida in the United States to devastating floods in China and Europe, environmental disasters like storms, fires and heat waves have cost the world $20 billion more this year than last, the group said on Monday.

The researchers said the increased cost is the result of climate change, and added that the 10 disasters in question also killed at least 1,075 people and displaced 1.3 million others.

'A year of climate breakdown'

"The costs of climate change have been grave this year," said Kat Kramer, climate policy lead at Christian Aid and author of "Counting the cost 2021: A year of climate breakdown."

"While it was good to see some progress made at the COP26 summit, it is clear [we are] not on track to ensure a safe and prosperous world," she said.

The most expensive weather disaster of 2021 was Hurricane Ida, which hit the eastern part of the United States in the summer, causing some $65 billion in damages.

After barreling through Louisiana at the end of August, it made its way northward, resulting in extensive flooding in New York City and the surrounding area.

Heavy rains swept across western Germany in July, leading to unprecedented flooding. The states of Rhineland-Palatinate and North Rhine-Westphalia were particularly hard hit, as were the neighboring countries of the Netherlands and Belgium.

Small rivers and streams turned into torrential currents that destroyed entire villages. Dams threatened to break while electricity and cellphone networks were shut down in what became one of the region's worst natural catastrophes in living memory. Over 180 people died in Germany alone, and many more lost their homes and belongings.

The deadly flooding in Western Europe came at a cost of $43 billion, according to Christian Aid's report.

A winter storm in Texas that took out the state's power grid caused $23 billion in damages, followed by flooding in China's Henan province in July, which cost an estimated $17.6 billion.

Other disasters costing several billion dollars include flooding in western Canada, a late spring freeze in France that damaged vineyards and a cyclone that struck India and Bangladesh in May.

From punishing heat in North America, to wildfires raging across the Mediterranean, to record-breaking floods in Europe and Asia, 2021's weather disasters brought home the reality of climate change, according to environmental experts.

The year 2021 was the most expensive for natural disasters in Germany's recorded history, at least in terms of the insurance payout. It follows an international trend of worsening disasters.