The storm has damaged buildings and caused massive power outages. President Joe Biden has promised federal assistance in the Gulf Coast region for "as long as it takes."

At least one person was reported to have died on Sunday after being hit by a falling tree, a local Sheriff's office announced.

What's the latest on the storm?

All of New Orleans was left without power as the hurricane left "catastrophic transmission damage" in its wake, according to Entergy New Orleans, the electric and natural gas utility that serves the city.

The only power in the city came from generators, the Office of Homeland Security and Emergency Preparedness said in a tweet.

Experts forecast that it would continue to weaken throughout Monday morning.

The city of New Orleans was under a flash flood warning, with the storm causing damage to buildings in the historic French Quarter.

In other parts of the state, NBC New Orleans anchor Christina Watkins tweeted the storm also blew off part of a roof of a hospital in the southern Louisianan town of Galliano.

The damage to the hospital comes as the state grapples with a surge in coronavirus cases, making it more difficult for health authorities to respond to the ongoing pandemic.

The power outage tracking website poweroutage.us showed over 1 million people in Lousiana had been left without electricity by Monday morning.

Another video shared on Twitter showed winds and rain blowing around a large building in New Orleans.

DW interview: Ida is more 'feisty than Katrina was

DW spoke to Matthew Cappucci, a meteorologist for the Washington Post, about the strength of Hurricane Ida and its similarities with Hurricane Katrina.

"The good news is that this was a smaller storm in terms of size than Hurricane Katrina, but it was more feisty in terms of the winds," Cappucci explained, adding that the wind speeds of around 250 kmph made it "the eighth strongest storm to ever hit the United States."

He also highlighted the problem of high rainfall, saying that the storm had dropped around 25cm of rain onto the city of New Orleans. So while the levees "are holding back the seawater, … they're trapping the rain and because the entire city is without power, they can't pump that water out, so it's a flash flood emergency for that city."

He added that as the storm heads inland, the threat it poses is of heavy rainfall and splitting up into small storms that could induce tornadoes.

As for the comparisons with Hurricane Katrina that made landfall on the exact same day 16 years ago, Cappucci said that "back in 2005… the city officials did a good job, they invested about $16 billion into infrastructure, trying to make sure the levees would hold and this time they did."

However, Katrina and Ida are different types of storms, meaning that the surge was less significant this time around to test the new infrastructure. 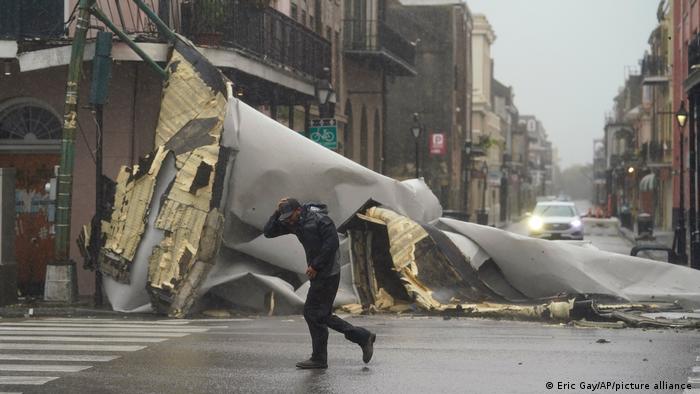 Biden said federal support in the Gulf Coast region would remain "for as long as it takes."

"I want to make sure that we're ready to surge all the response capacity, capability that we have to deal with whatever comes next, and a lot's going to be coming," Biden said while meeting with FEMA administrator Deanne Criswell.

The president said it may take weeks for power to be restored to some hard-hit areas.

Louisiana Governor John Bel Edwards tweeted Sunday that "current weather conditions" in the state are "only the very beginning of what's to come," as the storm only recently made landfall. He called on Louisiana residents to stay sheltered in place and to remain indoors.

During a press conference, Edwards said first responders will be unable to answer search and rescue calls until early Monday due to the storm.

The strength of Hurricane Ida has drawn comparisons to Hurricane Katrina, which devastated New Orleans in 2005. The storm killed over 1,800 people and caused millions of dollars in damage, with FEMA's emergency response being heavily scrutinized at the time.

The storm has damaged buildings and caused massive power outages across the US Gulf Coast. At least one person was reported to have died after being hit by a falling tree in the state of Louisiana.