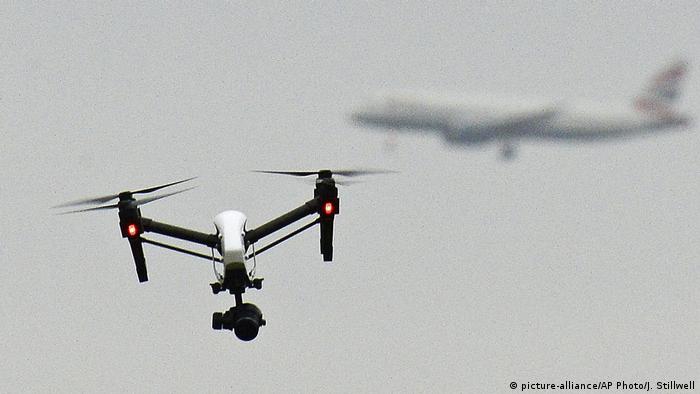 British climate activists will fly drones around Heathrow Airport in an attempt to shut it down, they announced on Thursday.

The group Heathrow Pause hopes to disrupt flights to protest against the expansion of the major aviation hub.

They will fly drones at head height, away from the runways, but within the restriction area of the airport.

"From the 13th September, we will exploit a loophole in Heathrow airport's health and safety protocols and fly toy drones within its restricted zone," the group said.

"It is our understanding that the airport's authorities will respond by grounding all flights," it said. "Drones will not be flown in flight paths and there will be no risk of harm to anyone," the group said in a statement.

The group plans to meet with authorities on Friday to discuss the plan. However, Heathrow has responded, saying the action is counterproductive.

"We agree with the need to act on climate change. This is a global issue that requires constructive engagement and action. Committing criminal offences and disrupting passengers is counterproductive," a spokesman for Europe's biggest airport said.

"The act of flying drones within 5km of an airfield is illegal because it carries risk. We will be working closely with the Met Police and other authorities to manage and mitigate any impacts this may cause."

An errant drone caused chaos at the nearby Gatwick Airport in December last year. Over three days, the constant reappearance of a drone within the airport airspace led to the cancellation or diversion of about 1,000 flights.

The group has ties to the Extinction Rebellion, a global effort to raise awareness of the global climate crisis.

One of the participants of the action, Valerie Milner-Brown, said in a statement she knew the stunt was illegal, but that action needed to be taken to stop what she termed the "catstrophic" impact of climate change.

"I am a law-abiding citizen — a mother and a grandmother too. I don't want to break the law, I don't want to go to prison, but right now we, as a species, are walking off the edge of a cliff.

"We have to cut emissions right now, or face widespread catastrophe on an increasingly uninhabitable planet. Heathrow Airport emits 18 million tons of CO2 a year. That's more than most countries. A third runway will produce a further 7.3 million tons of CO2.

"For all life - now and in the future - we have to take action. I'm terrified but if this is what it will take to make politicians, business leaders and the media wake up, then I'm prepared to take this action and to face the consequences," Milner-Brown added.

Climate protesters in London had threatened to shut down Heathrow airport — Europe's busiest air traffic hub. But in the end only a handful of activists took part, holding a sign that read: "Are we the last generation?" (19.04.2019)

Authorities have resumed flights out of Britain's busiest airport after a drone spotting caused a temporary halt to departures. But the Transport Ministry said police will be given new powers to deal with rogue drones. (08.01.2019)