UK police have freed a man and a woman detained in relation to repeated drone disturbances at Gatwick airport. The man was working elsewhere and was not a drone expert. 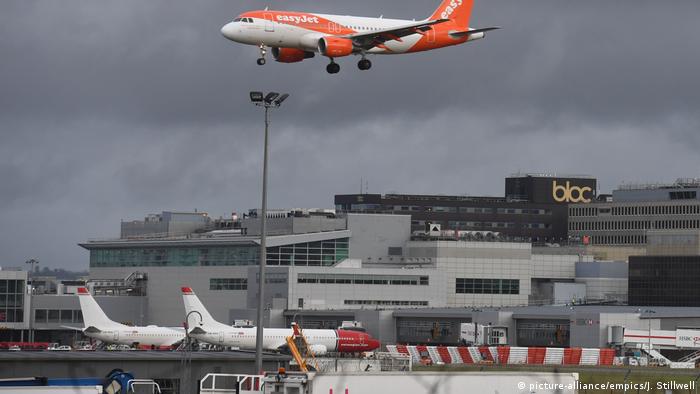 British police on Sunday released without charge a 47-year-old man and a 54-year-old woman who had been detained on suspicion of an illegal use of drones at London's Gatwick airport.

The drone incident had grounded hundreds of flights earlier in the week, causing travel chaos and affecting more than 120,000 passengers.

"Both people have fully cooperated with our enquiries, and I am satisfied that they are no longer suspects in the drone incidents at Gatwick," Detective Chief Superintendent Jason Tingley said on Sunday.

The two had been arrested in Crawley, a town about 8 kilometers (4.97 miles) away from the airport, late Friday on suspicion of "criminal use of drones."

The man's employer confirmed he had been working in Crowborough, fitting windows during the time the drone attacks took place. He had no expert knowledge of drones.

"Our inquiry continues at a pace to locate those responsible for the drone incursions, and we continue to actively follow lines of investigation," Tingley added.

"We ask for the public's continued support by reporting anything suspicious, contacting us with any information in relation to the drone incidents at Gatwick.

It is likely that police are searching for an expert hacker with an industrial drone. Not a hobbyist.

Despite their release, the Daily Mail newspaper named the couple with a photograph on their front page on Sunday with the headline "Are these the morons who ruined Christmas?"

Gatwick airport, Britain's second-busiest, reopened after "military measures" were put in place. Police earlier described the drones as "unusually large" and said they may have been operated deliberately in a bid to disrupt the airport at one of the busiest times of year. They said there were no indications of terrorism.

Transport Secretary Chris Grayling said multiple drones had been spotted about 40 times while the airport was shut down, saying the incident was "unprecedented anywhere in the world."

Flying a drone within 1 kilometer (1,100 yards) of an airport or airfield boundary in the UK was outlawed in July but aviation officials want that expanded to 5 kilometers.