The British government has given the go-ahead for the construction of a third runway at London's Heathrow Airport. Many fear the controversial project will eventually result in more pollution and noise. 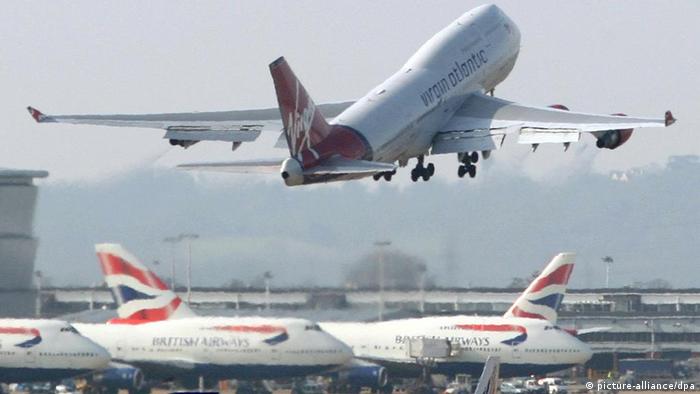 "The time for action is now," Transport Secretary Chris Grayling said after a cabinet meeting. He laid out the government's plans in parliament, which is to vote on the project in the coming weeks.

The UK Department of Transportation had argued that the airport expansion would permit an additional 260,000 flights a year and add $99 billion (€85 billion) to the British economy over 60 years.

Not everyone is amused

Heathrow is already one of the busiest aviation hubs in the world. But the decision on whether to expand it had been a source of contention. Even if lawmakers vote in favor of a third runway, the project is likely to be challenged in the courts.

The location of a new runway in southeastern England had been debated for years amid concerns over pollution, traffic and noise.

The chairman of the anti-Heathrow expansion group Hacan, John Stewart, on Tuesday described the government's decision as a bad day for residents.

'A tsunami of noise'

"Many communities will face a tsunami of noise, if a third runway goes ahead," he said.

"Many people who will be under new flights paths will find their lives changed forever."

Foreign Secretary Boris Johnson, whose constituency is heavily affected by the noise and pollution, once promised to "lie down in front of bulldozers rather than allow the airport to expand."

Heathrow to get new runway - possibly

Heathrow to get new runway — possibly

Australian airline Qantas has made aviation history by directly connecting Australia and Europe. DW also looks at some of the other longest flights in the world. (25.03.2018)