Environmentalists gained access to a runway at London's Heathrow Airport to protest its possible expansion. Police arrested six protesters, some flights were cancelled. 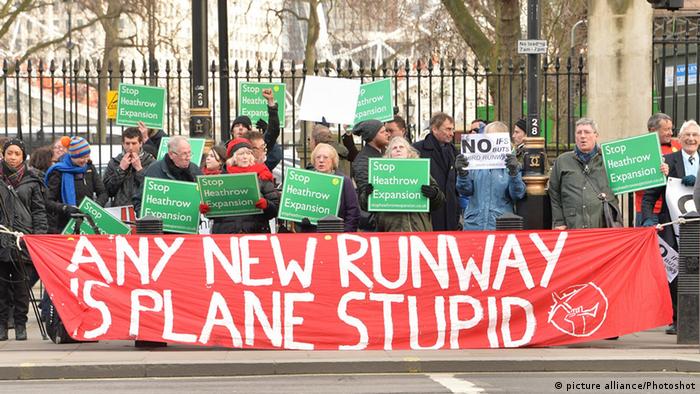 Around 12 environmentalists have managed to cut through a perimeter fence early Monday, and chained themselves together on the northern runway of Britain's biggest airport. Pictures posted by group members on Twitter showed them being confronted and led away by police Monday morning.

"Both runways are open, although there will still be delays and a few cancellations," the airport said in an emailed statement.

The airport officials also said they were working with the police to resolve the incident, and urged passengers traveling Monday to check their flights with the airlines before departure.

Earlier this month, a government-appointed commission called for building another runway at Heathrow, sparking criticism from local residents and environmentalist groups. The airport west of London is already the busiest in Europe, with 73,4 million passengers passing through it last year.

"Building more runways goes against everything we're being told by scientists and experts on climate change," activist Ella Gilbert, who was on the runway, said in a statement.

"This would massively increase carbon emissions exactly when we need to massively reduce them, that's why we're here," she added.

The issue of airport expansion has divided the conservative government led by Prime Minister David Cameron, who announced that the final decision on the 23 billion pound ($36 billion) project would be made by the end of the year.

Flights in an out of London have been disrupted by a computer failure at an air traffic control center in southern England. Aviation officials, however, have said the problem has been resolved. (12.12.2014)

The unions for the London Underground train drivers have called a day-long strike across the city. Drivers are upset over wages and a new plan to extend Tube service through the night. (09.07.2015)