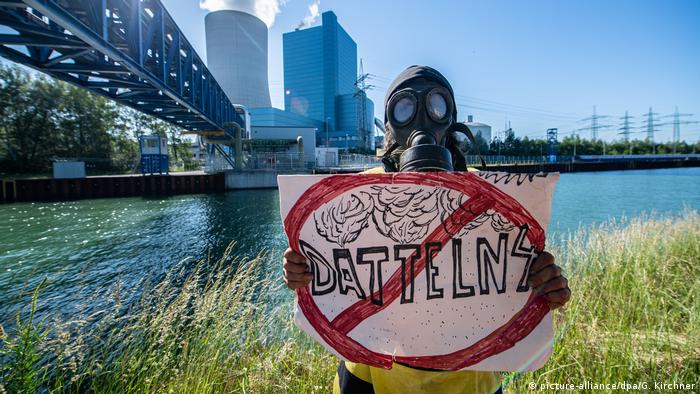 Around 500 climate activists on Saturday gathered outside the new Datteln 4 coal power plant in Germany's Ruhr region, to protest against its opening.

Fridays for Future, Greenpeace, as well as German groups Ende Gelände and the German Federation for Environment and Nature Conservation (BUND) were represented at the protests.

During the night into Saturday, climate activists graffitied the slogan "Climate crisis, made in Germany" on the side of the tower.

The plant, owned by Dusseldorf-based energy company Uniper, began running on Saturday, after a nearly 10-year delay to its initial start date. It fired up just months after Germany unveiled a plan to phase out coal by 2038. 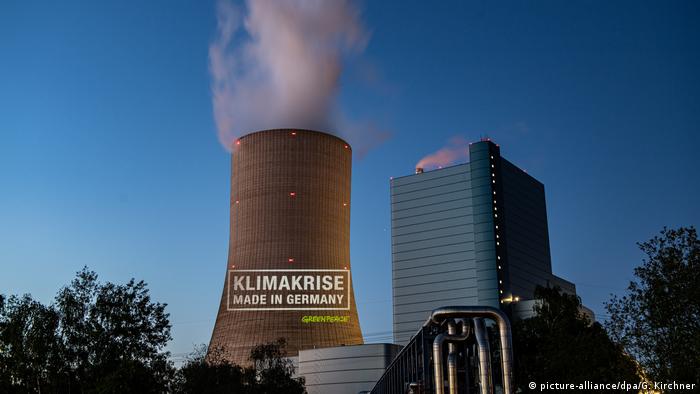 The protests were reported to be largely peaceful, despite several actions during the day-long event. One action included members of Ende Gelände swimming and using canoes in a canal used for cooling, while holding a floating banner with the slogan: "Shut it down."

Speaking at the protest, German Fridays for Futures climate activist Luisa Neubauer said: "It's a post-factual power plant. The facts speak for themselves." She said it was a "provocation," to mark the planned coal phaseout with a new coal power plant.

"We're going to stop this power plant, we're going to bring it to a standstill, we will win this conflict," Neubauer added.

Former miners also attended the protest. "We condemn the fact that coal mining in Germany was halted and jobs were lost, only for coal now to be imported from other countries to power Datteln 4," said Sebastian Suszka, a former workers' council member.

Greta Thunberg, founder of climate activist movement Fridays for Futures tweeted that Saturday was "a shameful day for Europe.

Earlier this year, Germany announced a roadmap to see coal phased out, at the latest by 2038. It laid out plans for eight coal-fired power plants to be taken off the grid in 2020.

It was an important step for the largest contributor of carbon emissions in the EU — accounting for over 22% of the bloc's CO2 emissions. Over a third of the electricity generated in Germany comes from burning coal.

Germany's coal commission has recommended that solutions be found for coal plants that are already built but not-yet-in-use to keep them from operating.

The state of North-Rhine Westphalia insisted that the additional carbon dioxide emissions from the new plant would be compensated by the closure of four other power plants.

EU presents 'Green Deal' farming plan to half pesticide use

The European Commission has presented ambitious agricultural and biodiversity plans which would improve animal welfare and improve fertilizers. Opponents say the policy is too "hurried" amid the coronavirus pandemic. (20.05.2020)

The German foreign minister has called climate change the "greatest security challenge of all time" and stressed that it acts as a catalyst for other crises.