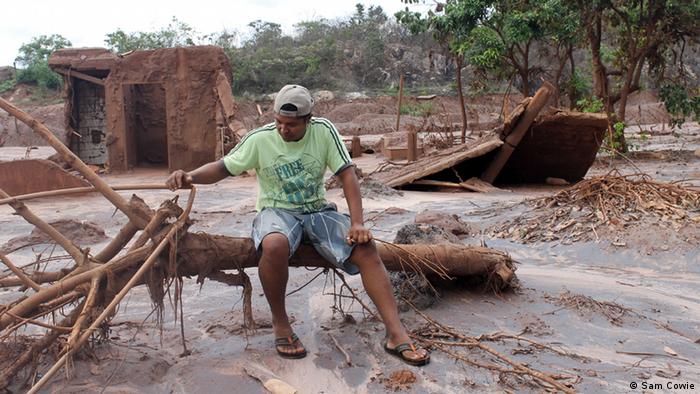 The only way to reach Bento Rodrigues, a small town in the Mariana district of Brazil's mineral-rich state of Minas Gerais, is via a bumpy dirt road.

On approach, the muddy remains of the town that was destroyed when the nearby Fundao tailings dam burst come into view. A blue car, seemingly untouched, balances in the middle of the mess of mud, broken homes and twisted metal.

What is widely considered Brazil's worst environmental disaster occurred November 5, 2015, when a tailings dam in the Mariana district burst, unleashing millions of tons of toxic mud.

The dam breach killed 17 people, left hundreds homeless and polluted the Rio Doce, the region's most important river. Innumerable fish were killed and the river ecosystem devastated before the toxic tailings spilled into the Atlantic Ocean.

Two months later, the companies responsible for the dam face billions in fines. Analysts have blamed the incident on poor practices by Samarco, the company in charge of the dam - along with insufficient regulatory enforcement in Brazil's mining sector.

It will take decades for the ecosystem of the river to recover - if it ever does. Meanwhile, the lives of people whose lives were destroyed by the disaster hang in the balance.

Wiped off the map

Wallison Henrique de Souza, a 28-year-old bricklayer, was at home in Bento Rodrigues when a friend arrived at his house panicking, shouting that the nearby tailings dam - used to store residue from iron ore exploration - had burst. 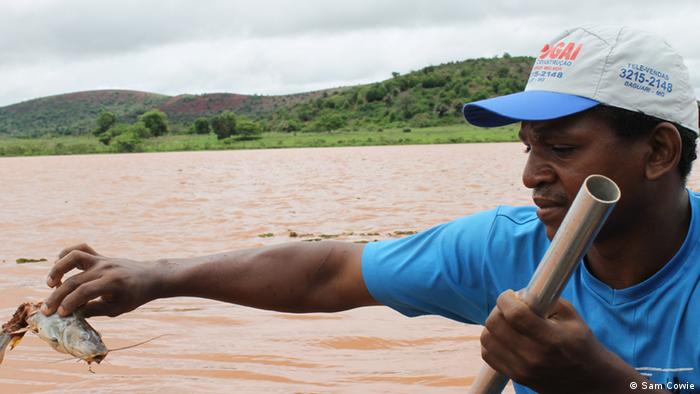 A fisherman finds a floating dead fish on the River Rio Doce, Brazil's fifth biggest river. The disaster killed fish and destroyed ecosystems. Thousands of fishermen directly depend on the river for their livelihoods

Wallison ran to safety in the surrounding hills, before taking shelter in another municipality nearby.

Shortly thereafter, millions of tons of toxic mining waste engulfed the town, wiping it off the map. Altogether, 17 people were killed. Wallison and some 600 others lost their homes and possessions.

From Bento Rodrigues, the first town affected, the toxic mud traveled across two Brazilian states via the Doce River before spilling into Atlantic Ocean. The Mariana mining disaster, as it came to be known, is widely considered Brazil's worst-ever environmental disaster.

In court over costs

The tailings dam was owned and operated by Samarco, a joint venture between Brazil's mining giant Vale and Anglo-Australian BHP Billiton.

At the United Nations climate conference in Paris in December 2015, Brazilian President Dilma Rouseff described the event as "the worst environmental disaster Brazil has ever seen," and blamed the disaster on the "irresponsible action of the company."

The Brazilian government initially fined Samarco the equivalent of $265 million, but later increased that amount to $5 billion.

The government has frozen the domestically held assets of Vale and BHP Billiton until the companies pay the fine. Prosecutors are now going to court to try and charge Samarco $1 million per day after the company failed to launch an emergency cleanup program.

The government also wants the company to pick up the tab for temporary housing for displaced residents, like Wallison Henrique de Souza, whose homes were destroyed. 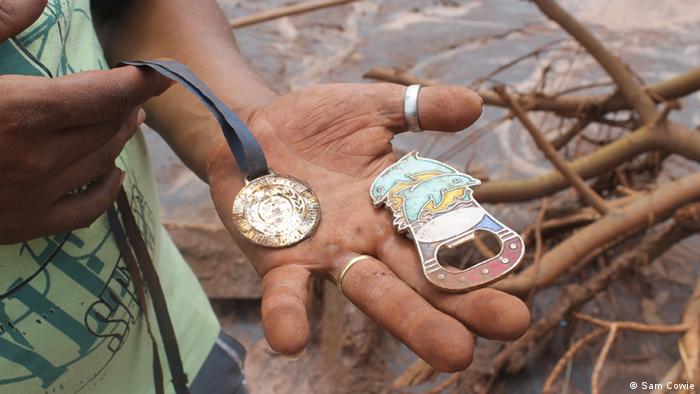 The muddy remains of Bento Rodrigues, wiped off the map when hit by a wave of millions of tonnes of toxic mud

In Barra Longa, a small town two hours' drive from the burst dam, affected residents say the response by Samarco and local government was slow and ineffective.

Francisco Marcelino, a retired driver whose house was flooded by six feet of mud laced with arsenic and other toxins, said that the first external help to arrive consisted of church volunteers from across the nation. The Samarco workers didn't show up until nearly a week later, he said.

"It was the worst thing I had ever seen," he said, shedding a tear in describing how the mud wave swept away the chickens he kept.

To date, the cause of the dam burst remains undetermined. An official investigation is underway.

Experts say the company clearly failed to avert the disaster and to minimize subsequent damages.

In a report commissioned by the United Nations Working Group on Business and Human Rights, analysts noted that affected residents did not receive official warnings about the burst - despite a 10-hour window between the accident and when the toxic mud hit the first town. They say timely action could have saved lives and possessions.

The full extent of the environmental damage remains unknown. Experts estimate that the region could take 10 to 50 years to recover - if it ever does. A full environmental assessment by independent contractors has yet to be made.

Vale and BHP Billiton have claimed that restoration of the Rio Doce is among their top priorities.

Thousands of fishermen who directly depend on the river for their livelihoods, along with several fishing unions, have launched lawsuits against Samarco.

Speaking from his boat on the now-orange River Doce in Periquito - a six-hour drive from the main spill - fisherman Moises Gomes said that he is concerned for the future. 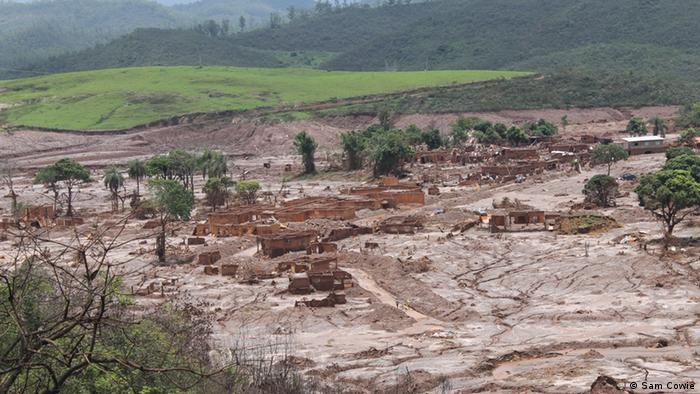 Possessions found in the muddy remains of Bento Rodrigues, the first town affected by the disaster where some 600 people lost their homes

"We hope for the people who live from fishing, that the companies will set up a mechanism for us to feed our families tomorrow," he said, picking a floating dead fish out of the river, pulling it apart and exposing its mud-filled insides.

In the last 20 years, at least four similar, albeit smaller-scale, mining incidents have occurred in the Minas Gerais region.

There are more than 750 dams just in the Minas Gerais region, 40 of which are considered at risk.

Dante Pesce, a member of the UN business and human rights commission, says that regulation in Brazil's mining sector is adequate more in theory than in practice, and that enforcement is lacking.

He says that when it comes to big projects, economic value trumps social and environmental concerns, and that fines for bad practices are relatively light.

"Even if the evidence is clear to condemn corporate practices, the fines are very low - and therefore, there is an incentive to take more risks on board than you should," he said.

Back in Bento Rodrigues, Wallison Henrique de Souza and scores of others are searching through what's left of the town, trying to find some remnants of their lives. Speaking from the muddy remains of his old hometown, de Souza said that he felt empty.

A court has blocked the Brazilian assets of mining giants Vale and BHP Billiton to ensure they pay for damage of a deadly toxic discharge that buried villages. The spill caused Brazil's worst environmental disaster. (20.12.2015)

Modern gadgets made with child labor

Cobalt is used in many electronic devices, but as Secretary General Salil Shetty of Amnesty International told DW at the World Economic Forum, a lot of it is extracted using child labor. (21.01.2016)