British airline Flybmi is shutting down due to rising fuel prices, carbon costs and uncertainty around Brexit. It is the latest company to be impacted as Britain prepares to exit the EU on March 29. 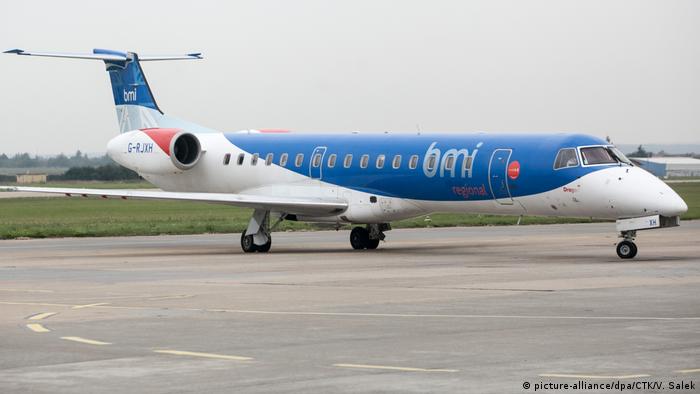 British regional airline Flybmi announced Saturday it has ceased operations and filed for administration, citing among other things uncertainty caused by Brexit.

Parent company British Midland Regional Limited said it had canceled all flights with immediate effect and its 17 airplanes would no longer connect 25 European cities.

"The airline has faced several difficulties, including recent spikes in fuel and carbon costs," a spokesperson said. "Current trading and future prospects have also been seriously affected by the uncertainty created by the Brexit process."

The airline, based in the East Midlands region of England, said it had difficulty securing post-Brexit flying contracts to destinations in Europe and there was uncertainty about being able to serve destinations after Britain leaves the EU on March 29.

It is the latest company to be impacted by Britain's upcoming exit from the EU, with several firms saying they would move their headquarters out of the country.

Brexit Diaries 52: Britain's on the highway to Hell

Were kicking the can down the road an Olympic sport, Theresa May would have a gold medal. Plus, Captain May aims for the iceberg, Leavers are hurt by Donald Tusk's words, and more in this edition of DW's Brexit Diaries. (12.02.2019)

UK Prime Minister May handed another defeat in Parliament

Lawmakers in Westminster have voted against the government's motion to send Prime Minister Theresa May back to the EU for final negotiations. The defeat means that May has almost no support left to negotiate in Brussels. (14.02.2019)

As Britain braces for a rocky exit from the European Union, some people are filling up their cupboards to be prepared for the worst case scenarios: food and medicine shortages. (03.02.2019)