Christmas Trees Take a Bizarre Twist | Germany | News and in-depth reporting from Berlin and beyond | DW | 25.12.2005

Twinkling lights and bright ornaments are the traditional dress for a Christmas tree. But some young German designers want to prove that flashy, ugly, spicy is the way to go, as they showed at an exhibition in Karlsruhe. 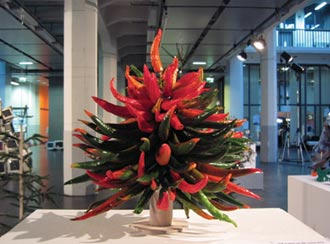 This tree is hot!

The atrium of the Karlsruhe University of Design smells like mulled wine. After all, it's hosting an exhibit on Christmas trees: all bear a sign with their name and deal with the topic of the Christmas tree in very different ways. 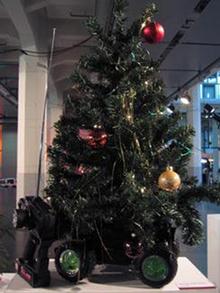 One of the most striking pieces is a plastic fir tree that can be operated by remote control. It swirls around the hall on massive tires. The tree is jostling visitors and other exhibits.

Stefan, who created the "Super Action Christmas Tree," is controlling his invention from the stairway. He's forced to defend himself because of his tree's bad manners.

"Well, we didn't know it at first, but the tree seems to enjoy jostling people's feet," said Stefan. "It's obviously looking for some company."

Creative assistant Stefan Legner had an idea for the "hottest" exhibit in the hall: a Christmas tree made from green chili peppers. The sign next to it reads "Darling, the tree is on fire." 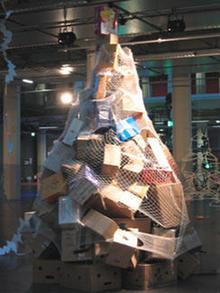 Christmas produces a lot of garbage, as this tree shows

There's plenty in the exhibition to keep visitors amused: there's a tree made from green beer bottles or the "sign post forest," a tree constructed out of three triangular right-of-way road signs on top of one another.

But there are also some very serious exhibits.

The only real living-room-like Christmas tree in the entire atrium is decorated with electric lights and reveals its true identity only upon second glance.

The ornaments are photos from the Abu Ghraib prison in Iraq, showing American soldiers abusing prisoners. In the background, a patriotic speech by US President George W. Bush loops infinitely.

Good ideas are the key to the Christmas tree show. Sandra and Moritz, who both study product design, organized this year's exhibition. Last year, only students and professors took part in it. But this time, other university employees were asked to create an exhibit. 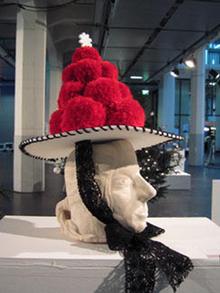 This tree portrays the traditional headdress of the Black Forest

Many of them did. The three janitors, for instance, made a tree from toilet paper.

Students and visitors alike are particularly impressed by the work of a staff member from administration. She took the metal frame of an umbrella, sprayed it gold, and bent it so that it took the shape of a Christmas tree. Moritz is delighted when he sees so much creativity.

"It's actually quite typical: just look at what somebody from the administration has created," said Moritz. "You'd think it was a student. And then you think: Hey, why don't these people study here?"

As the evening progresses, two Christmas trees are gaining increasing popularity: one that can be drunk and another one that can be eaten. The tree made from full beer bottles seems to appear at the right time, as the organizers have run out of beer.

In no time, the artists have also eaten up the multilayered Christmas tree made from cake.

"This tree actually reflects my understanding of Christmas pretty nicely," Martin said. "When I was a child, Christmas always meant eating loads of great food. Here, you can finally eat Christmas."

In Germany, gospel music is gaining in popularity, and gospel shows are almost as much a part of the holiday season as Christmas markets, mulled wine and stollen. (Dec. 20, 2005)

Who Needs Family When There's a Tree?

It seems that some Germans love to rock around the Christmas tree -- but without annoying relatives being there. A recent survey shows that Christmas trees are more essential to a good time than family. (Dec. 23, 2005)