Santa Takes a Festive Bashing | News and current affairs from Germany and around the world | DW | 14.12.2005 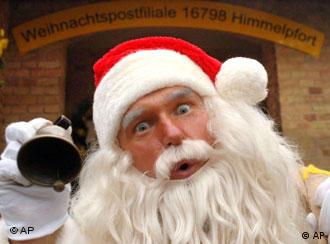 At the very latest when Bad Santa aka Billy Bob Thornton hit the silver screen in time for last year's festive season, the public was forced to acknowledge that the tubby guys in the fur-trimmed red suits didn't all grow up with the fairies and the elves.

But that said, for the more benevolent of the seasonal Santas, donning a ruddy ruby disguise in order to take center stage in makeshift department store grottos across the western world each December is a chance to fulfil the fantasies of the young and naïve. And the truly dedicated, might even try to apply the magic "ho, ho, ho" to the older and less gullible.

Such was the case with a certain Father Christmas in the western German city of Wiesbaden. Reluctant to return to his normal guise of a 31-year-old man, Stefan Stettler was still in costume as he waited for his evening train home. Not content with having spent a whole day putting smiles on children's faces, he killed time on the platform by trying to inject a note of the festive spirit into his fellow passengers.

Here's one for you, Mr Santa Claus...

When he asked two men to "tell Santa what they would like for Christmas," they responded by giving him a unusual "for the man who has everything" gift. Grabbing hold of his sack of presents, they beat him over the head, breaking his altruistic fingers as he tried to protect himself.

Stettler says there's a glint of something in crazed shoppers' eyes around this time of year which makes it obvious they are on a short fuse.

"I should have know better but come on, who beats up Santa Claus?" he asked.

Police are still searching for the festive humbugs, who they say were stressed out after hours of trawling the shops for Christmas pressies.

Stressed-out commuters and over-burdened shoppers will soon have to opportunity to avoid a Christmas coronary thanks to a new relaxation service from the German railway, Deutsche Bahn. (Dec. 2, 2005)

During the festive season, the scent of roasted almonds and mulled wine fill the streets of German cities as shoppers in mittens and gloves pour over handmade ornaments and other goodies at Germany's Christmas markets. (Nov. 27, 2005)