In Germany, gospel music is gaining in popularity, and gospel shows are almost as much a part of the holiday season as Christmas markets, mulled wine and stollen. 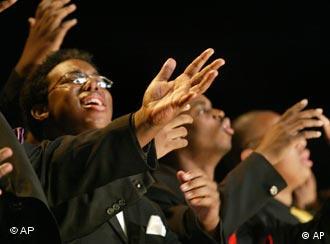 For many, Gospel's appeal is in the emotion

The posters start showing up in November, pasted on billboards, lampposts, or on the sides of buildings. In December, they mushroom, and in the days before Christmas they are unavoidable, advertising gospel choirs, shows, church concerts and sing-alongs.

It may seem peculiar that gospel music would find such a warm welcome in Germany, a country with one of the lowest rates of church-goers in Europe, and without a history of spiritual singing of its own.

But, the numbers are clear: The gospel Internet site berlin-gospel-web.de lists 50 gospel choirs in the Berlin area alone; gospelszene.de claims 500 choirs nationwide (although Arjan Leuscnhner, a gospel aficionado who helps run the site, estimates there are five times that many.)

How did the country of Bach, Beethoven and Wagner become enthralled by Queen Esther Marrow, Mahalia Jackson and the Harlem Gospel Singers? Music historians say it was part of the general wave of interest in black music that came about after World War II, helped along by movies like "The Blues Brothers" and "Sister Act."

For the past decade, gospel singers and choir directors -- many of whom are Americans working in the country -- have been hard pressed to keep up with the insatiable demand for concerts and workshops dedicated to black spiritual music. 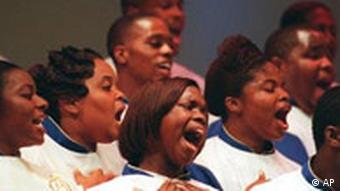 Can good singing give the Church a boost?

Adrienne Morgan Hammond has made a career of gospel, though she came to Germany as a musical actress and jazz singer. Today she leads three permanent gospel choirs in the Cologne area, and holds 20 workshops a year in churches around the country.

"There is a huge following for gospel music; I've never performed for less than 400 people," said Morgan Hammond, a California native who grew up singing gospel in her church choir.

"I was pretty amazed Germans liked this music. Its not really about their culture at all, but I think that has something to do with it. They're not allowed to show emotions, and Gospel is attractive because they can be emotional in public. And they can show their belief in God in a completely different way than they are used to."

Gospelszene's Leuschner noted: "Many young Germans find it embarrasing to say, 'I believe in God,' but they can do it through the music, especially since they are singing it in English."

One of the pioneers in Germany's gospel scene is Angelika Rehaag; she runs a 'gospel academy' near Düssledorf, set up a gospel music festival 10 years ago, and leads seven gospel choirs herself. She says the traditional church -- in Germany that means either Lutheran or Catholic -- has left a gap that gospel music has jumped in to fill. 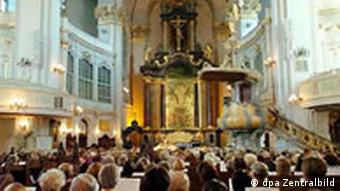 "People aren't finding a home in the church, it's too philosophical and theological. It's nothing for the heart. But gospel music is for the heart," she said.

According to Rehaag, after World War II, everyday Germans were forced to reject their traditional songs, which had been taken over during the war and turned into pro-Nazi propaganda. "After the war, singing stopped in schools and kindergartens. Choirs these days are filled by completely old people, or there are children's choirs. But for people between 30 to 50, there is a huge need," she said.

Rehaag sees gospel as the church's next best chance to appeal to a younger public. "A lot of church youth choirs have taken to calling themselves gospel choirs, whether or not they really sing gospel; maybe they are just singing spirituals. People come who would avoid the church, but gospel sounds interesting."

Changes to the church?

Ansgar Puff, a priest at the St. Josef Catholic church in Düsseldorf, where Rehaag leads a gospel choir, sees the matter a little more skeptically. Gospel singing may help bring people closer to religion, but so far there's no evidence it is swelling the rolls of the faithful.

"Often people start singing gospel and they don't even understand what they are saying. Then at some point they have to come to terms with the words of the text, so that is fruitful, and it leads them to think about their faith. But the next step would be to join the church, and I haven't seen them do that yet," he said.

A case in point could be Christiane Ehlert, a 42-year-old occupational therapist who broke with the church long ago, but who has been singing gospel with Morgan Hammond for the past two years.

"I don't necessarily connect my love of this music with the love of the church," she said. "It certainly feels good, like medicine. But it doesn't have to be about the love of God."

On a mission in Germany

Morgan Hammond seems to feel the music speaks for itself. "I try not to hammer religion into the heads of these people. But every other song we sing has the word God in it," she said. "I don't have to stand up and preach it. People who don't believe are still touched somehow."

She added: "In my youth I wanted to be a missionary. Now I call myself a missionary in Germany. I'm trying to help revolutionize the church and get people back in who got tired of having to be completely quiet in church, of having to suffer."

A piece by German composer Johann Sebastian Bach lost for decades has come to life in Japan this week, shedding new light on the 18th-century Baroque master. (March 22, 2005)

Numerous studies have shown a strong correlation between music and intellectual development. So why are German schools giving music education short shrift? (March 10, 2005)

Germany is known as an exporter of cars, precision machinery and beer. Now, one school is forging a path toward a new export: the country's impressive classical music legacy. (March 10, 2005)

Gospelszene: All about the German gospel scene