US President Donald Trump, his Brazilian counterpart Bolsonaro and Tesla boss Elon Musk — all swear by the anti-malaria drug as an antidote to coronavirus. But studies show it is ineffective, and potentially dangerous. 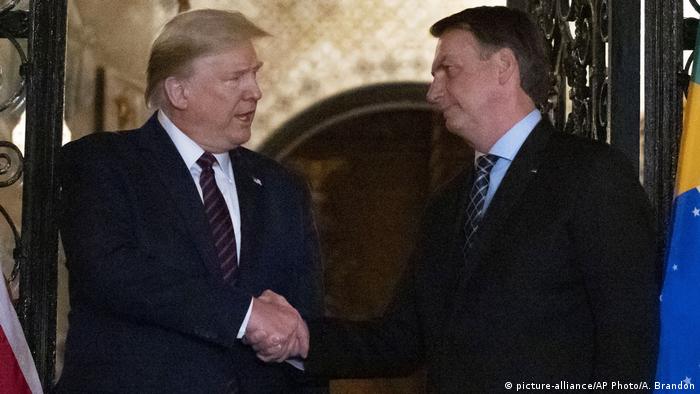 US President Donald Trump has advocated the benefits of hydroxychloroquine since March now. And for the past week, he has been taking the anti-malaria drug on a daily basis, because he "thinks it is good."

The US Food and Drug Administration (FDA) warned against the supposed miracle cure at the end of April. Researchers said there was no substantial proof it was effective in combating the coronavirus.

Trump's Brazilian counterpart, Jair Bolsonaro, has similarly propagated the the use of hydroxychloroquine. However, after visiting Trump in Florida in March, 20 members of his delegation tested positive for COVID-19, resulting in a PR disaster.

But as a former athlete and paratrooper, Bolsonaro claimed the "minor flu" wasn't going to seriously affect him. The president continues to ignore social distancing and continues to shake hands.

In order to protect the population though, he ordered military laboratories to produce millions of tablets. And he fired two health ministers who refused decree the prescription of the drug to COVID-19 patients.

Brazilian doctors fear that hundreds of patients died at home in the past few weeks after taking the potential cure without medical supervision. However, the Health Ministry is still expected to make treatment with the drug its official policy this week.

Where does the enthusiasm come from ?

The active ingredient in the well-known malaria drug Resochin, chloroquine, with its derivative, hydroxychloroquine, have been used to prevent and treat malaria for decades.

In tests conducted in China and France, the active substance chloroquine was said to have inhibited the proliferation of the novel coronavirus in cell cultures. That was taken to indicate that chloroquine could reduce the viral load in patients experiencing a severe progression of the disease. It was thought the active ingredient could therefore be used as an antiviral drug, the researchers reported.

A recent study (albeit not peer reviewed), found that the mortality rate after treatment with hydroxychloroquine is significantly higher at 28%. In COVID-19 patients who were treated without the malaria drug, the mortality rate was 11%. The researchers evaluated the case files of 368 patients at US hospitals for military veterans.

Despite   concerns about the methodology of the studies, their significance, and possible side effects, clinical tests with the well-known active substance have now been carried out in other places, too.

A small phase II study in Brazil, in which 11 patients died of fatal arrhythmias or heart muscle damage, shows how risky high-dose treatment of COVID-19 patients with chloroquine can be, especially in combination with the antibiotic azithromycin or other drugs.

The study, which was financed by the Brazilian government and whose preliminary, not peer reviewed, results were published on the scientific portal MedRxiv,  involved 81 hospital patients. Altogether 440 patients were ultimately supposed to participate in the phase IIb study "CloroCovid-19."

Marcus Lacerda's team from the Tropical Institute in Manaus in the Brazilian state of Amazonas administered a dose of 450 milligrams of chloroquine twice a day for five days (total dose 2.7 grams) to about half of the patients. The other patients were prescribed a dose of more than 600 milligrams (total dose 12 grams) for 10 days. There was no placebo group.

Too high a dosage?

Normally, malaria drugs are used at a lower dosage and only for a few days. In Brazil, the dosage was even higher than suggested by the Chinese authorities and the US Center for Disease Control and Prevention (CDC).

The health authority of the Chinese province of Guangdong had recommended treatment with 500 mg twice daily for 10 days (total amount 10 grams). The CDC recommended an initial dose of 600 mg plus another 300 mg after 12 hours, followed by 300 mg twice a day on days two to five (total dose 3.3 grams).

The physicians in Brazil noticed arrhythmia (significant extension of the so-called QT interval) within two to three days in patients receiving the high dose. On the sixth day of the trial, 11 patients died and the phase II trial was stopped immediately.

Internal medicine specialists had already warned in the Canadian Medical Association Journal about the dangers of QTc prolongation in the electrocardiogram when using chloroquine and hydroxychloroquine — especially in combination with the antibiotic azithromycin.

According to that report, the combination can lead to hypoglycemia (abnormally low blood sugar levels), restlessness, confusion and delusions, in addition to cardiac arrhythmia. An overdose can lead to epileptic seizures, coma and cardiac arrest, the report says.

Many COVID-19 patients are significantly older than malaria patients and often have pre-existing conditions. In such a risk group, a high-dose treatment with chloroquine is presumably much more likely to lead to damage to the heart muscle and to severe cardiac arrhythmia.

As there was no placebo group in the Manaus study, it is difficult to see exactly what proportion of deaths were caused by chloroquine. This is because all patients were additionally treated with the antibiotic azithromycin, which also extends the QTc interval. Some patients had also taken oseltamivir (Tamiflu), which can also have a negative effect on cardiac rhythm.

In principle, the two active ingredients chloroquine/hydroxychloroquine are well-known and safe. The drug Resochin, developed by the German pharmaceutical and chemical group Bayer,  has been successfully used as a malaria drug or prophylaxis since the 1930s.

However, the risks and side effects have been known for a similar length of time. Even such tried-and-tested drugs can cause severe damage if taken in extremely high doses, as wrong self-medication or by possibly endangered groups of people.

Investigations must now show whether the clinical trial in Brazil negligently overdosed patients or ignored warnings. The fatal outcome of the phase II study in Brazil coincides with a TV discussion, widely perceived as extremely racist, between two French doctors who wanted to turn Africa into a huge laboratory for coronavirus vaccine testing.

They cited the lack of resources on the continent and hence the lack of protection against the virus as the reason for their proposal. They said studies on AIDS had been done there on the same grounds. The provocative discussion caused worldwide outrage.

In the search for a vaccine or drug — also against the new coronavirus SARS-CoV-2 — clinical tests are nevertheless essential. Only through the cooperation of manufacturers, clinics and medical institutions can it be clarified whether a drug actually shows the desired therapeutic effect (efficacy), whether it is safe or whether side effects occur (tolerability), how exactly it has to be dosed (dose finding) and whether, in the end, the benefits actually outweigh the risks.

The treating physician is obliged to inform each participant in the trial in detail about the possible benefits and all risks — but risks and side effects can never be excluded.

Due to new research, this article has been updated since its original publication.

Medical researchers are working hard to find a vaccination against the novel coronavirus. But parallel to these efforts, the repurposing of existing drugs could shorten lengthy clinical trial phases and save lives. (09.04.2020)