Chinese fishing near Galapagos Islands raises fears for wildlife | Asia | An in-depth look at news from across the continent | DW | 06.08.2020

For several years, Chinese fishing fleets have been crossing the Pacific to reach fertile fishing grounds near the Galapagos Islands. Now Ecuadorian biologists are worried that the region's ecosystem is at risk. 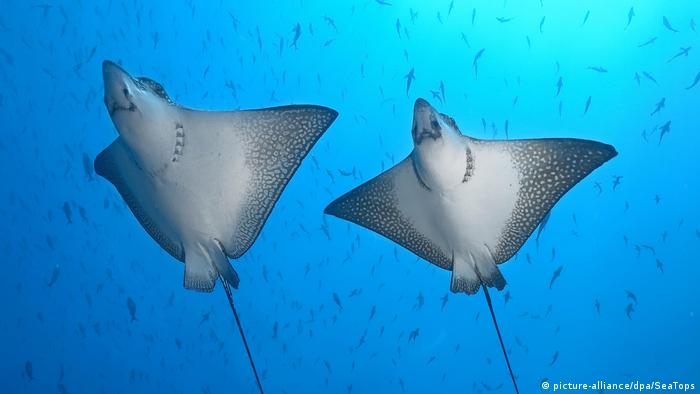 Three weeks ago, the Ecuadorian navy encountered a flotilla of nearly 260 fishing vessels sailing under Chinese flags off the coast of the Galapagos Islands.

"This is the fourth year in a row that this has happened. They are coming here because the area is extremely rich in fish due to the confluence of ocean currents," Luis Suárez, director of the Ecuadorian conservation NGO "Conservación Internacional Ecuador," told DW.

The fishing trawlers had traveled around 15,000 kilometers (9,320 miles) from the coast of China to the Galapagos Islands, which belong to Ecuador.

The islands are famous for their unique flora and fauna and have been a UNESCO World Heritage Site since 1979.

"A flotilla of 260 boats should not be concerning, because there are really very large fish stocks there," he said. 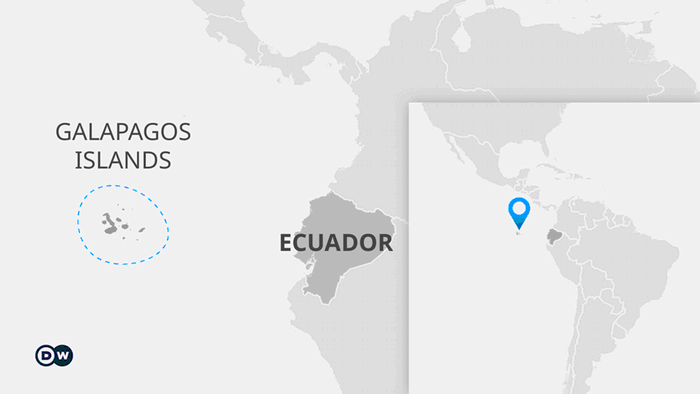 Marine biologist Cesar Penaherrera doesn't agree. "We don't know what these fishing fleets are really up to, and we don't know how much they fish," he told DW. "We only know that it is a large number of ships. And they catch fish and squid that are transported to other boats that they then bring to port."

Penaherrera, director of MigrMar, an international network of scientists studying ocean life in the eastern Pacific, is concerned that overfishing risks the collapse of the fish population in the waters around the Galapagos.

"It is a very concerning situation," he said.

And his concerns are not unfounded. In 2017, the crew of a Chinese ship was sentenced in Ecuador to several years in prison for illegally catching endangered hammerhead and silk sharks. Shark fin soup is a delicacy in East and Southeast Asia.

However, international maritime law can limit the prosecution of possible violations.

"The Chinese boats are fishing in international waters and not in the exclusive economic zone of Ecuador," said Chinese fishing expert Wang. Ecuadorian authorities also confirmed this.

The United Nations Convention on the Law of the Sea (UNCLOS), which both China and Ecuador have signed, stipulates that countries have the sole right to resources within a 200-nautical-mile zone (about 370 kilometers) off their coasts.

States have no claim to areas beyond that zone. The Chinese boats do not operate within that zone, and therefore do not violate international law or Ecuador's sovereign rights. 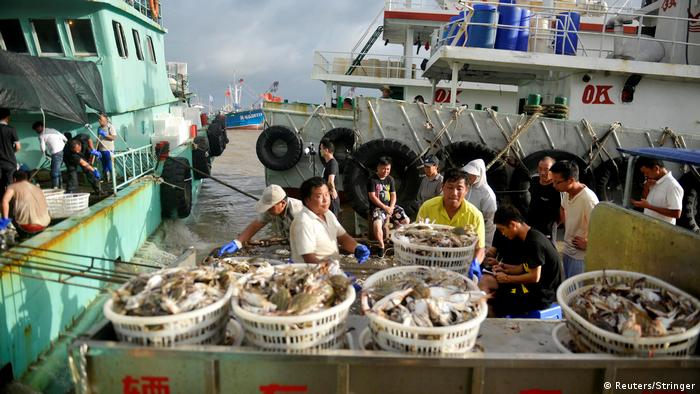 China's demand for seafood has been increasing alongside the country's increasing purchasing power for years, says Wang

However, Norman Wray, president of the Galapagos Government Council, sees room for improvement.

"The Convention on the Law of the Sea itself recognizes the need to seek agreements to balance the problems of species protection. And this is already being tackled," he told DW, adding that Ecuador is proposing a 350-nautical-mile protection zone to protect the biological diversity in the Galapagos Archipelago.

He also said stricter rules on controlling activities in international waters would have to be passed.

He did not provide details on what the supervision would involve. The minister added that China had agreed to hold bilateral talks about the issue. Gallegos also said Chinese authorities have vowed a policy of "zero tolerance" toward vessels linked to illegal fishing and the companies that own those vessels.

Chinese expert Wang said the excitement over fishing in Ecuador has been overblown by the media. "China has no real conflicts of interest with Ecuador because Ecuador rarely fishes in international waters," he said, adding that the proposed expanded protection zone is nonsense.

"No country can enlarge its economic zone just like that, that's why there is international law."

It is not without irony, however, that China is doing exactly this in the South China Sea, where it claims waters that are several hundred kilometers away from its coast.

According to Wang, China's demand for seafood has been increasing alongside the country's increasing purchasing power for years, and this demand is being met by Chinese fishing fleets on the high seas.

In 2016, more than 800 ocean-going fishing boats sailed under the Chinese flag, according to a study on fishing economics published in the journal Sciences Advances.

However, the study also indicated that Chinese fishing in far away waters is not profitable in many cases, due to maintenance and fuel costs. The long voyages are not due to better fishing or high demand, but rather heavy state subsidies.

The subsidies are a product of China's "remote water fishing" strategy from the 1990s. Because of overfishing, China's coastal waters became less profitable. Beijing responded with government-sponsored development of deep-sea fishing capacity.

But there are also signs China is willing to limit its catch. In June, Beijing said octopus fishing in the Galapagos Islands would be banned in the period from September to November.

With its iconic giant tortoises, crested black iguanas, huge ocean manta rays and a veritable menagerie of other cool creatures, the Galapagos Islands are one of the most beautiful places you will probably never visit.