China′s unmarried women struggle to overcome barriers to having babies | Asia | An in-depth look at news from across the continent | DW | 23.11.2016

China's unmarried women struggle to overcome barriers to having babies

Single women in China are often not only stigmatized as "leftover women," but are also denied the rights to reproduction. The government has a set of rules in place that ensure single, unmarried women cannot give birth. Facing a problem of an aging and male-dominated population, China decided to end its three-decade-long one-child policy earlier this year. In the past, Chinese couples were penalized for bearing a second child, but now all married couples are encouraged to have two children.

Although the move was celebrated as a breakthrough that allows citizens to gain control of their reproductive choices, not all women are entitled to enjoy the newly granted rights.

"I was very disappointed and felt that my rights were not recognized," 26-year-old Ma Hu told DW. Ma's request for reproductive services has been rejected by four different clinics, because she is a single, unmarried woman.

"I cannot understand why the Chinese government is pushing every family to have two children, while at the same time punishing single parenthood," Ma said in a report recently published by three Chinese NGOs advocating LGBT rights and gender equality.

Ma's failed attempt to get fertility treatment was one example in the report that demonstrates the plight faced by unmarried women in China. In the paper titled, "Single Women's Reproductive Rights - A Research Report on Policy and Lived Experience," the NGOs Rainbow Lawyers, Genderwatch and Gender Equality Net criticized the government practice of linking marriage with reproduction and its various policies that deter single women from giving birth.

According to China's family planning authority, the National Health and Family Planning Commission, only married women who can provide a marriage certificate and a license to give birth are permitted to use the technology. 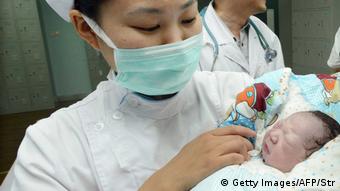 "Under the current regulations, single women, or even heterosexual women who have partners but do not want to get married, are denied the rights to have children," LGBT rights lawyer Danny Ding, who is also one of the authors of the report, told DW.

"As gay marriage is not allowed in China, lesbians who have partners are also then classified as single women and thus not allowed to access reproductive technology," the lawyer added.

Debates over reproductive rights are not new in China. When the famous Chinese actress and director Xu Jinglei admitted that she had travelled to the United States to freeze her eggs, it triggered a huge discussion on Chinese social media about whether single women should have reproductive rights.

"Isn't it okay to just want a child but not want to marry a man?" the popular blogger Han Han asked on Chinese social media SinaWeibo, attracting tens of thousands of comments and shares. The current restriction barring unmarried women from accessing reproductive services is largely related to the dominant patriarchal values in Chinese society.

"The prevailing traditional family values in our society only recognize a couple comprised of a man and a woman," women's rights activist and social worker Guo Jing told DW. "Under this perception, no other forms of marriage exist," Guo added.

Permission to give birth

In fact, government regulations do not only limit access to fertility facilities, but also try to ensure that giving birth before marriage is out of the question. The "reproduction permit" or the "birth permit," which also ensures prenatal medical care, is issued by the authorities only to married women.

Women who give birth without this permit will be penalized with a "social maintenance fee," the amount of which is decided by the provincial governments. It can sometimes be up to three to six times of a household's annual per capita income.

Sexual harassment in China is on the rise, so is the public's awareness of the issue. Still, victims face significant constraints when reporting cases due to social stigma and familial pressure. (08.09.2016)

Unmarried women in China have been stigmatized as "leftover women" in recent years. But in a new commercial video, some of them speak out on their yearning for independence and the determination to break social norms. (08.04.2016)

Campaigners have welcomed the release of five Chinese women's rights activists whose detention had drawn international condemnation. But China says it may prosecute an associated anti-discrimination NGO. (14.04.2015)

Last year, unmarried couple Shen Bolun and Wu Xia gave birth to their little girl and was fined a "social maintenance fee" of 43,910 renminbi ($7,100). The couple asked the public for donations to pay the fine and, at the same time, use their own example to start a discussion on the current family planning policies.

These fines, however, are only the beginning of a long list of challenges unmarried mothers and their children encounter, as children born without a birth permit will not be able to legally register to get a "hukou" – a crucial document that all Chinese citizens need to get access to education, health care, to marry or even to open a bank account.

Although the government eased the restrictions a bit earlier this year - now a single mother or a single father can register their child with their own account as long as they can provide a DNA proof - it is still not possible for both partners in an unmarried intimate relationship to get themselves registered as the parents of their child.

"If both the mother and the father want to register as the child's parents, they need to provide a marriage certificate," lawyer Ding said.

Driven by the current restrictions, many single women turn to overseas reproductive services.

"They go to Thailand or Cambodia, to get assisted reproduction. Some others who can afford will go to the US," Danny Ding says, referring to the cases he encountered during the course of research.

But for less affluent single women, the future still looks grim and it seems there is no possibility of bearing their own child.

"I cannot afford going overseas to get reproductive services, and I am sure I will not get married with a man in the future because I am a lesbian. There is no chance for me to have a child," said Hu, whose case was featured in the paper.

Activist Guo explained that less and less women in China find marriage an indispensable way of life and some even find this kind of commitment a burden. But that doesn't mean the yearning to have a child is less.

"Whether it was one-child policy or two-child policy; whether the state is suppressing population growth or trying to boost fertility rates; women in China never had the full control of their reproduction decisions," says Guo.

The activist also emphasized that the government should reform current reproduction policy. "Marriage should not be a pre-requisite of giving birth. Freedom to marry and freedom of reproduction are two separate rights."

Indonesia: How an NGO is helping women with unwanted pregnancies 31.03.2022

Abortion is mostly illegal in Indonesia, which forces women with unwanted pregnancies to seek medical help from non-professionals. A non-governmental organization is now helping these women deal with this situation.