China's Xi Jinping has been unanimously reappointed president for a second term, with no limit on the number of terms he can serve. His close ally Wang Qishan has been appointed his deputy. 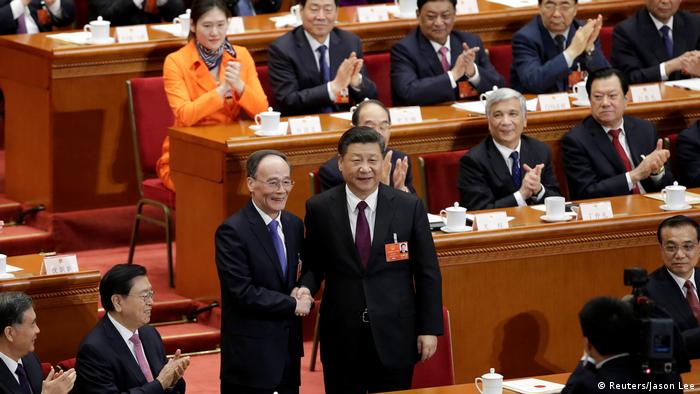 All 2,970 votes were cast in favor of the 64-year-old Xi, who after a vote by the legislature last Sunday, gained the right to continue in office indefinitely after term limits for the president and vice president were abolished.

Wang Qishan, Xi's close ally, became his deputy, with 2,969 delegate votes in favor and one against. After the vote was announced in Beijing's Great Hall of the People, Wang bowed and then walked over to Xi to shake his hand.

While Xi's reappointment was assumed, there had been some speculation about Wang. The vice presidency was a largely symbolic role in previous decades, but it is expected to be adapted to allow Wang to become involved in issues chosen by Xi, even though he is not a senior member of the Communist Party.

The constitution states that the vice president can "assist" the president in his work and act on his behalf to carry out presidential duties. 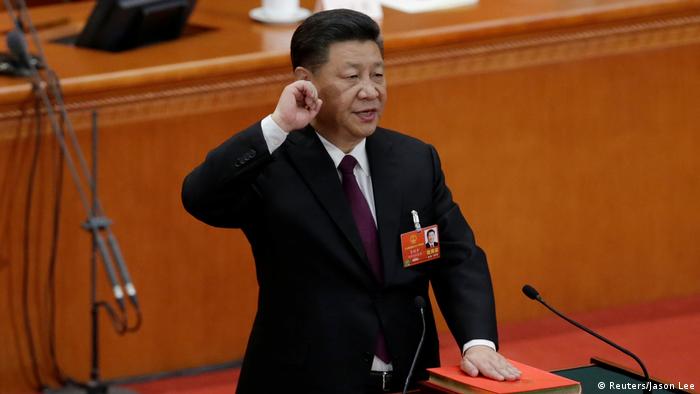 President Xi takes the oath with his hand on the constitution

A key role in US relations

Until last year, the 69-year-old Wang had been in charge of the Communist Party's Central Commission for Discipline Inspection. Over the last five years, the Commission had punished 1.5 million officials, ranging in status from low-level cadres to regional leaders and generals.

Before that, Wang had been in charge of finance and commercial affairs and at that time held a seat on the party's Politburo. When he held that post, Wang led annual economic talks with Washington. In his new post, Wang is expected to play a key role in maintaining China's relations with the US.

Within the party, however, Wang is now just an ordinary member; he does not hold a senior party position. It is not yet clear how the party's top leadership will deal with such an anomaly in a highly structured system.