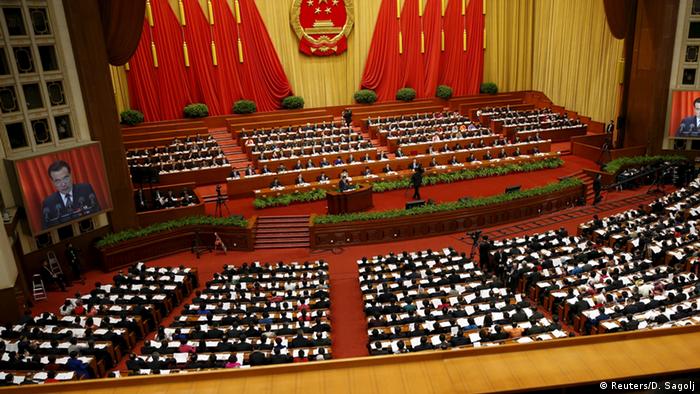 While warning that China faced "more and tougher problems," including weak export demand, Li said he was confident that stable growth could be maintained.

The prime minister, who is the country's top economic official, announced a growth target of 6.5 to 7 percent - down on last year's aim of "about 7 percent."

"The larger the economy grows, the greater the difficulty of achieving growth," Li told delegates at the opening session of the National People's Congress (NPC), China's nominal parliament.

"China will face more and tougher problems and challenges in its development this year, so we must be fully prepared to fight a difficult battle," said Li in his budget report, adding that the government would increase projected spending to allow a fiscal deficit of 3 percent.

"Downward pressure on the economy is growing," Li said. "Domestically, problems and risks that have been building up over the years are becoming more evident."

Authorities are also to make cuts in the steel, coal, and "other industries facing difficulties." China aims to lay off 5-6 million state workers over the next two to three years, according to two sources cited by Reuters. That would be Beijing's boldest retrenchment program in almost two decades.

Under the plan outlined by Li, China is also set to raise its defense spending by 7.6 percent this year, a smaller increase than past years as it seeks a more efficient military.

The speech touched on various other issues, with Li vowing that Beijing would oppose "separatist activities" on the island of Taiwan. While seeking to preserve China's sovereignty and national integrity, Li said, the government would also aim to safeguard peace and stability in the Taiwan strait."

China and Taiwan split amid civil war in 1949, but the government in Beijing insists that Taiwan and the mainland belong to a single Chinese nation that must be unified at some point in the future.

Li also pledged "full support" for the embattled chief executive of Hong Kong, amid a recent upsurge in protests by pro-democracy campaigners.