The future of electromobility will be determined in China, say an increasing number of automotive experts. Chinese car manufacturers are increasingly targeting markets in Europe and North America. 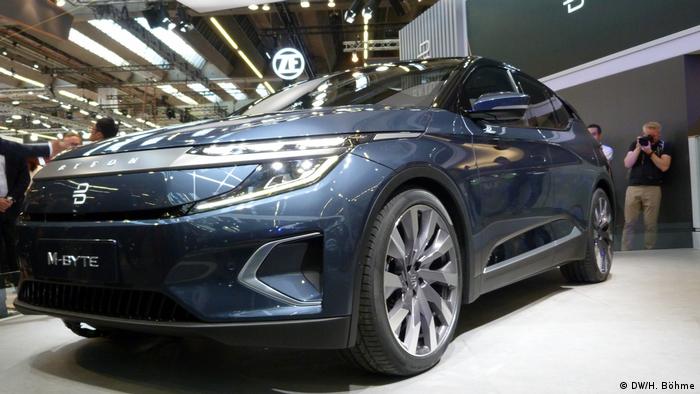 Just a few years ago, "Made in China" cars were a laughingstock in the West, ridiculed for their clumsy design, catastrophic crash test results and sloppy workmanship. But now, when Chinese carmakers like Byton, Wey and Hongqi present their new models, auto industry and media representatives take serious note.

This can also be observed at the biennial IAA car show in Frankfurt, which was opened by German Chancellor Angela Merkel on Thursday.

Visitors and industry observers flock in droves to the stands of the Chinese manufacturers, eager to glance at their offerings. The three Chinese brands, with their purely electric models and plug-in hybrids, show how far they have come in terms of design and technology.

Of the three, Byton is pursuing the most radical approach. The e-car brand, which has only been around for a few years, has its roots in China. But right from the start, the company's leadership, led by CEO Daniel Kirchert, has had its sights set firmly on the global market for luxury limousines and SUVs.

"It takes a certain amount of courage and madness to do something like what we have done," Kirchert told DW, recalling the beginnings of the company.

"In principle, we decided three and a half years ago to start on a white sheet of paper," he said. The electrification of the automotive industry is not the only reason why we believe we stand a chance when competing against established players in the industry, Kirchert stressed. "We also believe in connectivity; the vehicle itself will become a connected device in the future and it's going to be a huge trend."

If the company's vision comes to fruition, when a driver gets into a Byton car, the vehicle automatically adjusts the preferences such as seat adjustment, telephone contacts or music playlists to suit the driver's requirements.

The data required for this is to come from the company's own cloud. The interaction between the driver and the car takes place via cameras, sensors and a giant display more than one meter wide in the vehicle's cockpit.

Unlike Wey, which is a subsidiary of the Great Wall Motors, and Hongqi, which is a brand of the state-owned First Automotive Works (FAW), Byton does not have a traditional car manufacturer pulling the strings from behind. Kirchert views it as an advantage.

"I believe that as a startup we have the huge advantage of being able to start out on a greenfield site and create a new culture."

The site is located in the outskirts of the Chinese city of Nanjing, about 300 kilometers northwest of Shanghai. This is where the purely electric vehicles, which are to be released on the Chinese market from the summer of 2020, are being manufactured.

Less than a year later, the SUV model M-Byte (article picture) will be available in the US and Europe at a cost of about €45,000 euros, excluding the applicable value-added tax. 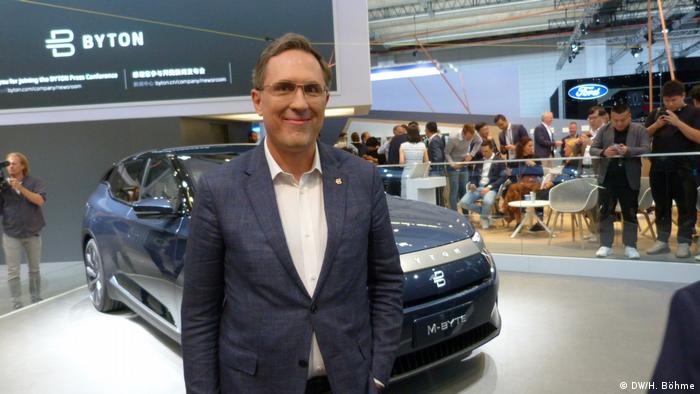 'It takes a certain amount of courage and madness to do something like what we have done,' Kirchert said

Since Byton presented its concept car in 2018 at the CES in Las Vegas, the company has repeatedly caught the attention of the global automotive industry. At the time, former BMW manager and Byton co-founder Carsten Breitfeld was still on board. He left the company at the beginning of 2019.

The current CEO Kirchert, who has lived in China for more than two decades and speaks Chinese fluently, also has a BMW past.

Chief designer Benoit Jacob came to Byton after stints at Renault, VW, Audi and BMW. One of his best-known designs is the all-electric BMW i3. Just like Jacob, who still has his design office in Munich, Byton's software and interface developers haven't had to relocate to China to carry out their work.

CEO Kirchert repeatedly emphasizes the company's global approach: "We are not a classic Chinese manufacturer. We are a global team. We have many Germans, many Americans and people from over 30 nations."

Byton chose to set up its headquarters in China because that is where the best conditions for such projects exist, Kirchert underlined, saying that there is enough capital and government support there.

"But without the design center in Munich, where the M-Byte was developed in its early phase, and the development center in Silicon Valley, we would never have managed to do that. We have a global DNA."

The employees in Santa Clara, California, and the auto specialists from Munich will likely continue to supply the concepts and designs for networked autonomous driving and electric cars, which will then be assembled in Nanjing by Kuka robots and Chinese workers.

For Kirchert, the Byton project is an ideal fusion of two worlds. "Our whole interior, including the big screen, the touchpad on the steering wheel and so on, was made by a team of tech people coming from Apple, Google and other internet companies," the CEO said.

"And the traditional part of the car, as well as the design, came from very experienced automotive engineers. We combined the two worlds. I think sometimes it's not so bad to be a startup."

The automotive industry is coming under increasing pressure worldwide due to a growing focus on electric mobility, autonomous driving and digital services. Competition from China is also on the rise. (07.01.2019)

VW and Microsoft put their heads together in the digital cloud

The car industry is going through profound change. Volkswagen appears to understand the scale of this better than most, and its collaboration with Microsoft is part of its attempt to rebrand itself for the future. (27.02.2019)

Germany's industrial giants have been reluctant to invest in the costly production of electric car battery cells until now. Will a €1 billion government grant be enough to recover time lost to China and South Korea? (13.11.2018)