China has insisted that protests in Hong Kong will not be on the G20 agenda in Japan this weekend. US President Donald Trump intends to bring up the issue when he meets with his Chinese counterpart Xi Jinping. 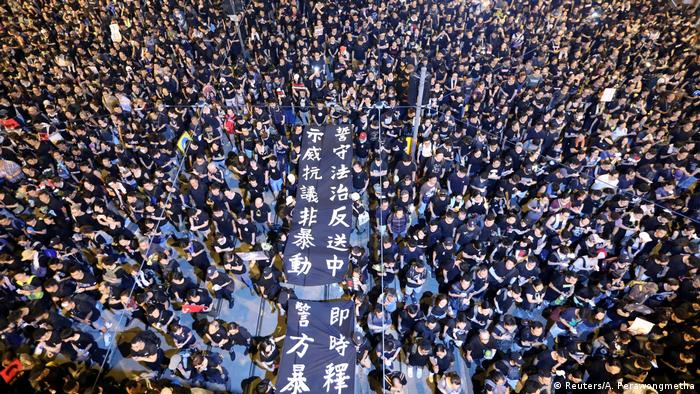 China said on Monday that it would not allow the Group of 20 nations to discuss the situation in Hong Kong when the group of world economic powers meets in Japan later this week.

Hong Kong has been the site of massive protests this month as demonstrators demanded the withdrawal of a bill that would allow people to be extradited to mainland China to face trials in courts controlled by the Communist Party. Protesters have also called on the city's leader, Carrie Lam, to step down.

The extradition bill, as well as the police response to the protests, has drawn international criticism from rights groups.

"Hong Kong is China's special administrative region," Zhang continued. "No matter at what venue, using any method, we will not
permit any country or person to interfere in China's internal affairs."

Chinese President Xi Jinping and US Presdient Donald Trump are scheduled to meet at the G20 summit, set to take place on Friday and Saturday in the southern Japanese city of Osaka.

Trump has weighed in on the protests, saying he understood the reason for the demonstrations and hopes the protesters "can work it out with China." US Secretary of State Mike Pompeo has also indicated that Trump indents to discuss Hong Kong with Xi.

Huge demonstrations in Hong Kong saw a controversial extradition bill shelved, but fears over potential Chinese interference in the self-governing territory continue to raise doubts among business leaders there. (21.06.2019)