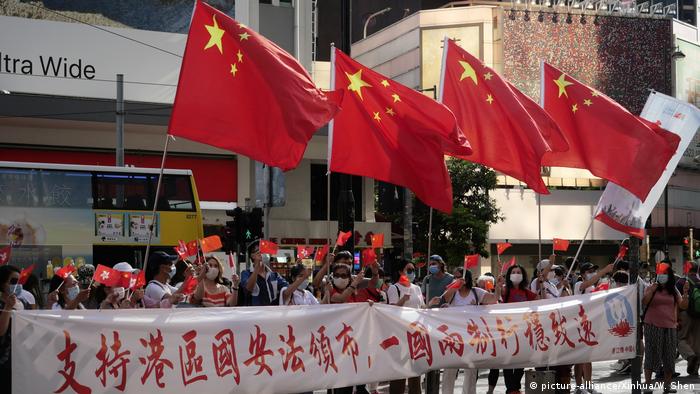 Amid a diplomatic crisis triggered by China's clampdown on Hong Kong, Chinese officials harshly condemned retaliatory moves taken by the UK and Canada.

The UK sees the new security law in Hong Kong as a "clear and serious" violation of the terms agreed between London and Beijing before the UK gave back its one-time colony to China. In response, London has announced that millions of Hong Kong residents who still hold British National (Overseas) passports would now be given a path to full UK citizenship.

Ambassador Liu slammed the UK offer and said China would decide on its response based on the UK's action.

China also slammed Canada for "unwarranted comments" on Hong Kong and urged it to "immediately correct its mistakes."

The statement by the Chinese embassy in Ottawa comes after Canada suspended an extradition treaty with Hong Kong and halted export of sensitive military equipment to the island city.

The embassy said any "erroneous measures introduced by a handful of western countries including Canada will never affect the implementation of the National Security Law" in Hong Kong.

"Their attempt to exert pressure on China under the pretext of Hong Kong-related issues is completely against the trend of time, and doomed to fail like kicking against the pricks," the embassy said.

The embassy also issued a travel warning for Canada, urging its citizen to be aware of "frequent violent actions by law enforcement agencies in Canada, which have triggered many demonstrations." The Chinese diplomats did not provide details on the protests, but the warning likely refers to the anti-racism rallies that had originated in the US and spread to Canada. The protests in Canada have been much more peaceful than similar rallies across the US.

Chinese companies 'are all watching'

In addition to the Hong Kong crisis, US allies have been facing strong pressure from Washington to sideline Huawei, which is the leading global company on constructing modern 5G networks. Washington believes that equipment provided by Huawei could be used for spying and sabotage, which the firm denies. The US and Australia have already banned the tech company from working on their 5G infrastructure.

"We want to be your friend. We want to be your partner," Liu said. "But if you want to make China a hostile country, you will have to bear the consequences." He also said that axing the Chinese tech giant would harm London's reputation.

"The China business community are all watching how you handle Huawei. If you get rid of Huawei it sends out a very bad message to other Chinese businesses," Liu said.

On Sunday, the head of the French cybersecurity agency ANSSI said there would not be "a total ban" on Huawei. The state would give authorizations to the companies who already use Huawei technology, but the country's cybersecurity officials were pushing other telecommunication firms not to start using it, ANSSI's Guillaume Poupard told Les Echos newspaper.

At a Monday briefing in Beijing, China's foreign ministry spokesman Zhao Lijian called on France to "provide an open, fair, just and non-discriminatory business environment for enterprises of all countries, including Chinese enterprises." He also said that Beijing hoped that Paris would have an "objective and fair attitude" in the dispute.