A fresh COVID-19 cluster has forced Chinese authorities to impose a strict lockdown in a province near the capital Beijing. Officials warn the coronavirus outbreak remains "severe and complicated." 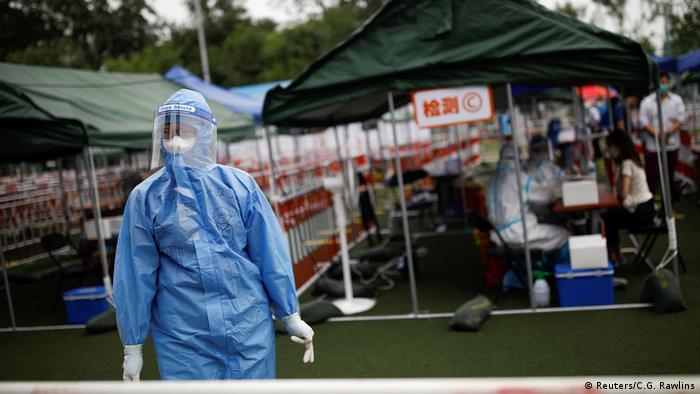 Chinese health officials said on Sunday that Anxin county — about 150 kilometers (90 miles) from Beijing — will be "fully enclosed and controlled," — the same strict measures imposed at the height of the pandemic in the city of Wuhan earlier this year.

Only one person from each family will be allowed to go out once a day to purchase necessities such as food and medicine, the county's epidemic prevention task force said in a statement.

The move comes after another 14 cases of the virus were reported in the past 24 hours in Beijing, taking the total number of cases in the city of over 20 million to 311.

After China appeared to have largely brought the virus under control, hundreds have been infected in Beijing and cases have emerged in neighboring Hebei province in recent weeks.

The current outbreak was first detected in mid-June and has been traced back to Beijing's sprawling Xinfadi wholesale food market, which supplies much of the city's fresh produce, sparking concerns over the safety of the food supply chain.

Nearly a third of the cases so far have been linked to one beef and mutton section in the market, where workers are being made to quarantine for a month, city officials said Sunday.

Some 12 cases of the novel coronavirus were found in the county — including 11 linked to Xinfadi, the state-run Global Times reported.

The new cases in Beijing have prompted fears of a resurgence of the virus in China.

Beijing city official Xu Hejian told reporters Sunday that "the epidemic situation in the capital is severe and complicated," warning that the city needed to continue tracing the spread of the virus.

The capital has mass-tested wholesale market workers, restaurant workers, residents of medium and high-risk neighborhoods and delivery couriers over the past two weeks.

Beijing officials have also reclosed schools and locked down some neighborhoods. Anyone leaving Beijing is required to have a negative virus test result within the previous seven days.

Tens of millions of Chinese traveled during the three-day Dragon Boat Festival that ended Saturday, with no outbreaks reported immediately.

The Chinese capital recorded 31 new cases Wednesday, as the worst resurgence of COVID-19 in the city since February continues. Many domestic flights in and out of Beijing have been canceled. (17.06.2020)

Taiwan's number of COVID-19 infections is currently below 400, despite the island's proximity to the outbreak's origin on mainland China. Experts say early intervention has helped stop a public health crisis. (09.04.2020)