Chinese government scholars say the proportion of elderly people will steadily rise, while the country's population will decline. The dynamic could have a far-reaching impact on China's social and economic development. 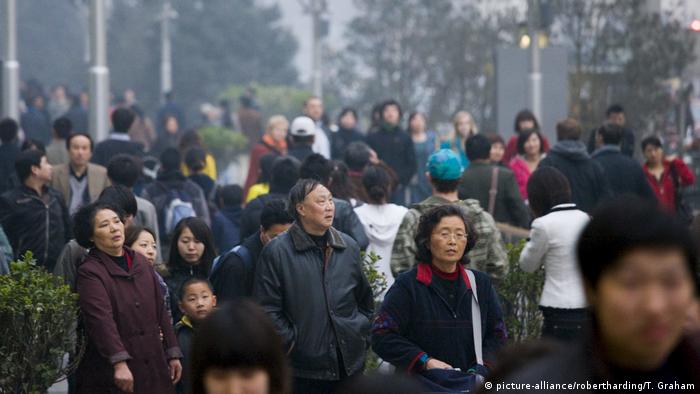 The China Academy of Social Sciences (CASS) published its latest edition of the "Green Book of Population and Labor," revealing that the country's population is expected to reach 1.44 billion people by 2029 and then begin an extended period of "unstoppable" decline.

The report says growth in China's working population has now stagnated and fertility rates remain low. By the middle of the century, the population is expected to fall to 1.36 billion, with a decline in the workforce population of as much as 200 million.

If fertility rates do not change, China's overall population could fall to 1.17 billion by 2065.

A sharp rise in elderly people

With China's working population on the decline and fertility rates staying at current levels, the number of elderly people as a proportion of the general population is set to rise sharply.

The trend will have a far-reaching impact on the social and economic development of the country, researchers warn.

"From a theoretical point of view, the long-term population decline, especially when it is accompanied by a continuously ageing population, is bound to cause very unfavorable social and economic consequences," the report, published on Friday, said.

Previous forecasts have warned of the steady increase in China's elderly population, which is expected to reach 400 million by the end of 2035 from around 240 million in 2018.

The CASS report found that the "dependency rate," the proportion of nonworking people, which includes children and the elderly, rose for the first time in more than 30 years in 2011, and is widely predicted to increase further for at least the next few decades.

In particular, the proportion of retirees will rise steadily until 2060, the report said.

In 2016, the Chinese government relaxed its controversial "one-child policy," which was enacted in 1979 in order to curb population growth.

The policy reversal was meant to rebalance China's age structure. But despite the fact that couples can now have two children, the country's birth rate declined 3.5 percent in 2017 and is expected to have fallen again in 2018.

Couples in China are allowed to have two children from now on. The Chinese government implemented the law after concerns related to the country's shrinking population and aging workforce. (01.01.2016)

China resorted to a one-child policy in 1979 to limit its then-ballooning population, and then over three decades later changed it to a two-child policy. Experts say it cannot be a model for other countries. (19.07.2018)