The new regulation gives expanded powers to the Chinese army to patrol or shut the country's 14 land borders. Beijing cited worries about the pandemic and security as a reason for the law. 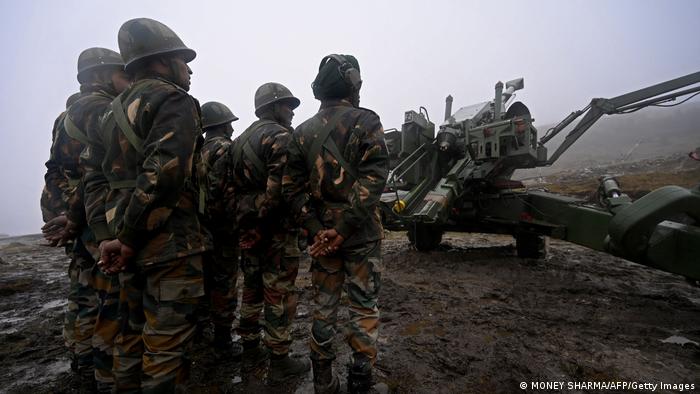 China passed a new law on Saturday, the first in the country's modern history to deal explicitly with how it patrols its massive 22,100-kilometer (13,700-mile) land border with 14 other countries.

The Land Borders Law, which will go into effect on January 1, comes at a time when China is concerned with security on its frontier with Taliban-controlled Afghanistan, COVID-19 entering the country via illegal border crossings from its southeast Asian neighbors and a tense standoff with India over their mutual border that has seen deadly skirmishes in the past year.

According to the text of the law, China's People's Liberation Army will be allowed to counter any "invasion, encroachment, infiltration, [or] provocation" that occurs on any of the country's borders and provides a legal framework for hard border closures if Beijing sees fit.

What is the conflict at the China-India border?

India's Hindustan Times reported that the new measure "formalizes combining the military defence of China's land borders with improving social and economic development in border areas." It also empowers citizens in border regions, such as Tibetan villagers living near India, Bhutan, and Nepal, to act as a "first line of defense."

China and India have been locked in a border dispute since May 2020. A month later, a fight broke out between troops on either side as soldiers beat each other with blunt instruments. Some 20 Indian and four Chinese soldiers died.

The law also stresses that in the case of border disputes, all diplomatic efforts should first be exhausted before the military is deployed, according to Chinese state media, which also praised the law it says will benefit those who live near the border.

One year since clash, India and China disagree on border

What else is Beijing worried about?

Chinese officials have raised concerns not only over relations with India. They have also voiced fears that Islamist extremists may cross the border into Xinjiang province and connect with Uyghur Muslims, tens of thousands of whom are currently being rounded up by authorities and sent to forced reeducation and labor camps.

There are also worries that illegal immigration from Vietnam and Myanmar is bringing more cases of COVID-19 into the country. There have recently been surges of the virus in the Chinese provinces that border these countries.

Reuters contributed material to this report