A new strain of pneumonia has a "much higher" mortality rate than the one caused by COVID-19 and is spreading in several Kazakh cities, Chinese officials have warned. The central Asian country has ridiculed the report. 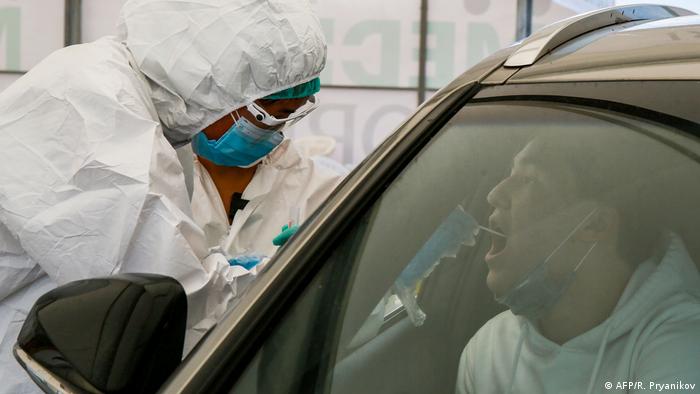 The Chinese embassy in Kazakhstan warned its citizens on Thursday of an unidentified strain of pneumonia, after a "significant" rise in cases in June.

"The mortality rate of the disease is much higher than that of pneumonia caused by the novel coronavirus," it said on its official WeChat social media account.

The Chinese embassy described the virus as "unknown," according to the Hong Kong-based South China Morning Post.

Health institutions in the central Asian country were working on identifying the reasons behind the sudden surge in cases.

Kazakhstan, however, dismissed the claim by China's embassy as "fake news."

"The information published by some Chinese media regarding a new kind of pneumonia in Kazakhstan is incorrect," the ministry said.

According to the Chinese embassy statement, there had been a spike in cases in the cities of Atyrau, Aktobe and Shymkent since mid-June.

Shymkent is 1,500km (930 miles) southeast from the regional capital of Atyrau, while the distance between Atyrau and Aktobe is 330km (205 miles).

Pneumonia in Kazakhstan had killed 1,772 people in the first half of the year, with 628 deaths in June alone, including a number of Chinese citizens, the Chinese embassy said.

On Tuesday, state news agency Kazinform reported an increase in cases of pneumonia in the former Soviet republic – in June more than twice than the same period in 2019.

The Chinese embassy in Kazakhstan urged Chinese nationals in the country to "step up prevention to lower the infection risks."

Kazakhstan imposed its second lockdown this week in a bid to control the spread of coronavirus. The latest figures show almost 55,000 COVID-19 recorded infections, including 264 deaths.

The number of new cases rose on Thursday to a daily record of 1,962.

Kazakhstan has given itself seven years to transition from the Cyrillic to the Latin alphabet, in a push to modernize the Central Asian country. But at a village school, not everyone is so sure about the mammoth change. (01.07.2019)

Several killed in 'brawl' in Kazakhstan

At least eight people have been killed in clashes that erupted in southern Kazakhstan on Saturday. The fighting broke out in towns with a significant Dungan population, a Muslim minority group of Chinese ethnic origin. (08.02.2020)

According to British neurologists, COVID-19 can cause serious damage to the brain and central nervous system, causing psychosis, paralysis and strokes, which are often detected in their late stages. (09.07.2020)