Journalist and blogger Yang Hengjun has been in custody for more than seven months. Australian Foreign Minister Marise Payne said Yang was being held in Beijing without access to his lawyers or family visits. 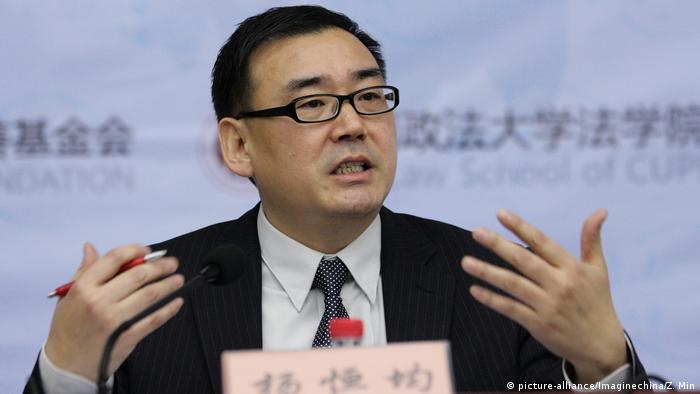 Australian Foreign Minister Marise Payne said in a statement that her government was "very concerned and disappointed" by Yang's arrest in the southern city of Guangzhou in January. He was later transferred to Beijing.

"Dr. Yang has been held in Beijing in harsh conditions without charge for more than seven months," Payne said.

"Since that time, China has not explained the reasons for Dr. Yang's detention, nor has it allowed him access to his lawyers or family visits," she said.

"We expect that basic standards of justice and procedural fairness are met," Payne stressed.

"If Dr. Yang is being held for his political beliefs, he should be released," she added.

China's Foreign Ministry spokesman Geng Shuang told reporters on Tuesday that China had acted "in accordance with the law and fully guarantees the rights of Yang Jun," adding that he was "currently in good health."

Lawyer: 'No foundation' for spy charge

A former Chinese diplomat turned online journalist and blogger, Yang has written pro-democracy and human rights articles and blogs on social media that have a considerable following in China.

China's Foreign Ministry has said the Australian academic was suspected of engaging in criminal activities that represented a danger to China's security.

But Yang's lawyer, Rob Stary, said it was still unclear why he had been charged with espionage.

"We think it relates to espionage on behalf of Australia, but it's not specified on the charge sheet," Stary said.

"We'd obviously be disturbed by that if it was the allegation because there is absolutely no foundation for it at all," he added.

Yang is the latest foreign national to be arrested in China and charged with espionage. Two Canadians, former diplomat Michael Kovrig and businessman Michael Spavor, were also detained in December.

Australia has traditionally avoided confrontation with Beijing, its most important trading partner. But Yang's arrest could increase public pressure on Canberra to take a tougher line, amid growing concern over Beijing's influence on Australian politics, its more aggressive foreign policy and growing military clout in the Pacific.

Sarah McIver, held in China over a work permit issue, has been released. Her case is unrelated to the detention of two other Canadians, who some believe were held in retaliation for the arrest of a top Huawei executive. (29.12.2018)

Activists urge release of US woman held for 'spying' in China

A UN panel and a human rights group have demanded the release of a suspected US spy who has been "arbitrarily detained" by Beijing. The appeals come as UN Secretary-General Ban Ki-moon prepares for a visit to China. (06.07.2016)

China has issued the most detailed defense yet of its policies in the Xinjiang region. Beijing says the region's Uighurs are being taught how to assimilate, while some see echoes of earlier re-education programs. (16.10.2018)