Beijing has applied to join a free trade agreement, once called the Trans-Pacific Partnership (TPP), which had been originally designed to counter Chinese economic clout. Now, China sees economic opportunity. 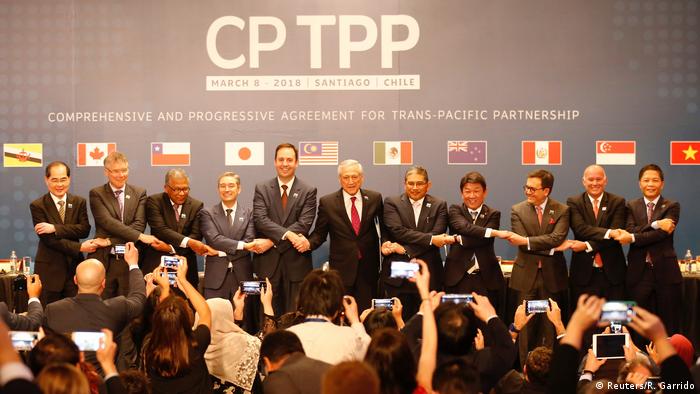 After the US withdrew from the TPP, Pacific countries renamed and signed a new agreement in 2018

China on Thursday filed an application to join the Comprehensive and Progressive Agreement for Trans-Pacific Partnership (CPTPP), a major free trade agreement signed by 11 Pacific countries in 2018.

Before the agreement was refitted as the CPTPP, it had been known as the Trans-Pacific Partnership (TPP). That had been drafted by the United States under former President Barack Obama as a cornerstone of the US "pivot to Asia" policy intended to counter China's regional influence.

After Obama's successor, Donald Trump, withdrew the US from the TPP in 2017, the remaining signatories renegotiated and renamed the agreement.

Current signatories to the CPTPP include Australia, Canada, Chile, Japan and New Zealand.

China's commerce minister, Wang Wentao, submitted China's application in a letter to New Zealand's trade minister, Damien O'Connor, the Commerce Ministry said in a statement. The ministry added Wang and O'Connor held a telephone conference to discuss the next steps following the application.

What are the challenges for China to join?

If China joins the agreement, it would place the world's second-largest economy as a key partner in on of the world's largest free trade pacts. Its members combines to form over 13% of the global economy.

China has said multiple times it wants to join the CPTPP. In March, Premier Li Keqiang said Beijing will "will actively consider joining."

However, all 11 members of the CPTPP would need to agree on allowing China to join, which is complicated by China's currently contentious geopolitical and economic relationship with Australia.

A series of spats with Beijing, involving Australia criticizing China's human rights record and geopolitical ambitions has spilled over into trade and economic issues. Tensions reached a boiling point after Australia called for an international inquiry into the origins of the coronavirus.

In May, China suspended the China-Australia Strategic Economic Dialogue, which had been formed to boost trade and promote talks.

The month prior, Australia scrapped a Belt and Road deal between Beijing and the state of Victoria.

China has since imposed tariffs on Australian goods including wine and barley. Australia has asked the World Trade Organization (WTO) to rule against the wine tariffs on exports to what was formerly its biggest market.

Despite this, last week, China lobbied the Australian parliament to support its ambition to join the CPTPP, saying in a submission that China and Australia's economies have enormous potential for cooperation.