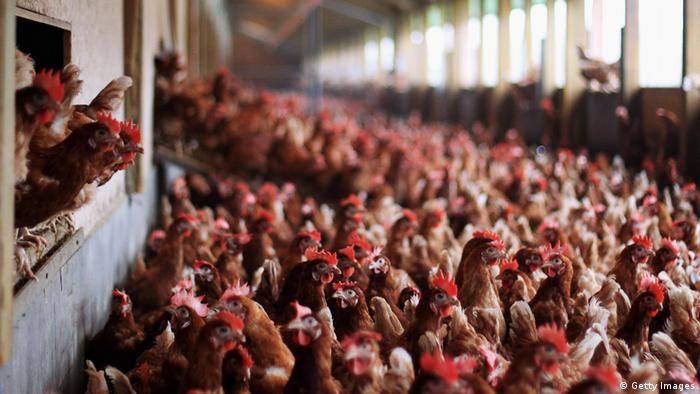 The study was carried out on chicken produced by the companies and purchased from Aldi, Lidl and other discount supermarkets across Europe — in France, Germany, Poland, the Netherlands and Spain — as well as from the producers themselves.

Overall, Germanwatch researchers found that the most contaminated chickens were produced by Germany's PHW Group, which butchers roughly 4.5 million chickens per week (59% of samples tested), followed by France's LDC Group (57%) and the Netherlands' Plukon Food Group (36%).

Read more:    What is antibiotic resistance?

Renders antibiotics useless when you need them

The threat posed by the presence of such pathogens is that humans may become infected while handling or consuming the tainted meat, yet the presence of antimicrobials in the chicken effectively renders antibiotics useless in fighting the infection.

The World Health Organization (WHO) says that critically important antimicrobials (CIA HP) like quinolones are of primary importance to human health. This group of antibiotics is used as a last line of defense when all other antibiotics prove ineffective. The Germanwatch report found traces of CIA HP in 35% of its samples.

The report points out that a lack of uniform EU rules has allowed the grave health risk of antibiotic-resistant pathogens in meat to flourish across Europe. Germanwatch argues that the tests show "the need for an EU-wide ban on CIA HP antibiotics in industrial livestock production."

The group argues that such antibiotics should be reserved for human use only and have no place in food production. Resistance rates in the US, says the NGO, have decreased significantly since the use of quinolones in poultry production was banned in 2005.

There are other ways

The Germanwatch report suggests that beyond banning the use of specific antibiotics, producers should practice more animal-friendly husbandry, thus avoiding the need to administer them in the first place.

The report's authors conclude by advising consumers to "avoid cheap chicken and switch to organic products from smaller, farm-based livestock farms," where few or no traces of antibiotics are to be found.