Have Germany's football authorities sold their soul to the devil? DW's Ross Dunbar looks back at a momentous day in March 2005 that saved one of Germany's biggest clubs, but didn't teach the league a lesson. 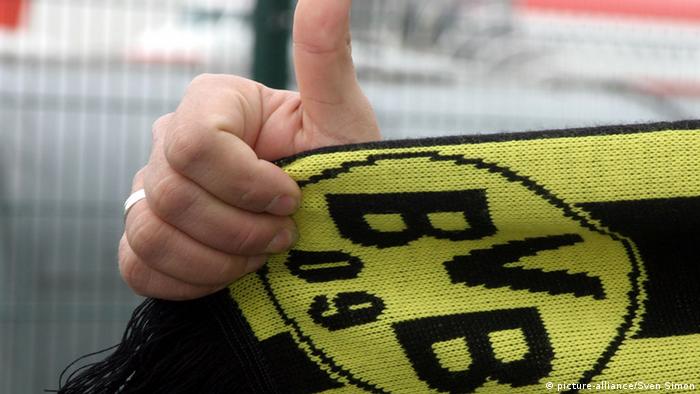 March 14, 2005: a day forever etched in the memory of Borussia Dortmund supporters.

As implausible as it seems, Dortmund, carrying close to 100 million euros of debt, stood minutes away from financial oblivion a decade ago when investors and shareholders met near Düsseldorf Airport. The decision they came to saw brought the club slowly back on to a sound financial footing. Dortmund has since emerged powerfully and gone on to enjoy recent success in the Bundesliga and Champions League.

Dortmund has learned lessons of the past and refuses to be sucked in by the need to play catch-up with Bayern Munich. But these days, others appear to be giving these lessons the cold shoulder despite the Bundesliga collectively standing in good health. Recent developments, which appear to not just approve, but reinforce the single benefactor model in German football, have created a schism.

Fans of not just tradition-laden clubs but provincial sides that have followed the strict-until-now laws of the German authorities in a financial context are aggrieved. Teams bolstered by income from Red Bull, Audi and Volkswagen are gathering momentum in their search for a place in the Bundesliga, offering their businesses exposure to billions worldwide.

The short-term fixes are encouraging; but the realities of relying on outsourced money for marketing rights or equity can be damaging. When Dietrich Mateschitz of Red Bull, Martin Kind - soon to be full owner of Hannover 96 - and Dietmar Hopp decide enough is enough, the league will find itself in a similar predicament to that of the Serie A.

What lies in waiting for VfB Stuttgart, meanwhile, in the next few months could define the club's short and medium-term future. Relegation to the second division would be catastrophic for the former German champions who are currently bottom of the league with attendances and revenue streams dwindling.

The club sold highly-coveted teenager Joshua Kimmich, who didn't make a single league appearance, with the view of banking some much-needed cash as quickly as possible. As a precondition of more than 20 million euros of extra finance from Daimler, confirmed last year, the club will consider following the unpopular model of Hamburg to spin-off its football operations to a subsidiary company.

Several politicians, including Karl Küting of the Christian Democrats, have voiced their concerns at the negative balance sheets in the Bundesliga - and the teams in the second-tier. Albeit with the help of some 'soft-loans', Hamburg juggles more than 100 million euro debts, whilst Werder Bremen and Hertha Berlin have hunted out fresh investment to help cash-flow over the last 12 months.

Carrying debt on its own won't be a problem when compensated by regular Champions League football, as the example of Schalke has shown - the Royal Blues strive to be debt-free by the year 2020 and the club's various revenue streams won't fall foul of UEFA's Financial Fair Play regulations.

From a league and culture steeped in sustainability, the organizers of the Bundesliga, the Deutsche Fussball Liga (DFL), are needlessly chasing at the tail of capitalism and the lure of greater revenues like the English Premier League.

If, or when, the bubble bursts, some German clubs will feel the pain that others suffered in previous decades. For the aftershocks of financial crises, see MSV Duisburg, Hansa Rostock, Alemannia Aachen and others.

Do you agree? Where do you see the Bundesliga heading financially and have the clubs learned their lessons from previous economic issues in the past? We'd love to hear from you. Leave a comment, or use the hashtag #dwbundesliga on Twitter.

Dortmund Live to Fight Another Day