Charity Slammed for Serving Discriminatory Soup | Europe | News and current affairs from around the continent | DW | 20.02.2006

In Paris, a charity group linked to the far right is under fire for serving pork soup to the homeless. Critics say the government should ban the program as the choice of food discriminates against Muslims and Jews. 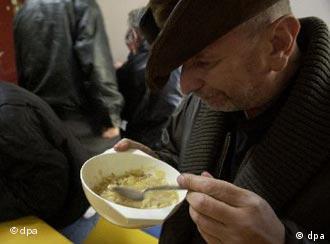 Is offering pork soup to the homeless and hungry offensive?

Every Thursday night a handful of volunteers equipped with a trunk of hot food meet up in a poor district of Paris to feed the needy. They kick off with red wine served from a cask on the roof of a car, and an appetizer of dried sausage. That is followed with bowls of steaming hot soup, traditionally known as a "repas gaulois" or Gallic dinner, cheese and dessert.

Anne Lucien-Brun, a retiree, has been volunteering with the group, Solidarity for the French (SDF) for the past year. "I am here to serve soup to the homeless, to the people who are let down by our society, and to those who accept eating soup with pork in it," she said. Although SDF has links to a fringe far-right political group, Lucien-Brun says that rather than being politically motivated, the work she does is about defending French traditions.

"We are in France, in Europe. We cook with pork, we have soup with pork and we don't see why our country should be banned from doing something that is our tradition," Lucien-Brun said. 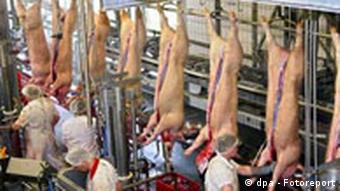 The government doesn't actually prohibit pork dinners, but some city officials would like to see that happen. Paris City Hall is managed by a coalition of Socialists and Greens who say the meals are discriminatory and xenophobic because they're designed to exclude observant Muslims who don't eat pork.

Although the police say there's no law against distributing soup to the homeless, they shut down weekly dinners twice in December on the grounds that they were creating a public disturbance. The volunteers say such action amounts to police harassment and prevents them from providing a much-needed service to anyone who wants to take advantage of it.

Kalif Kamaté, a homeless Muslim from Mali says he prefers not to eat pork, but that these days he can't afford to be choosy. Similar pork dinners have been organized in Nice, Nantes and Strasbourg, where they were also banned for a time last month.

Using soup to spread a message? 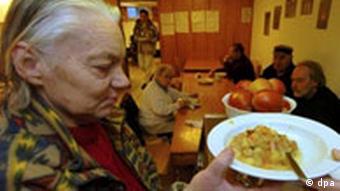 Beggars, they say, can't be choosers

Although they have since resumed, an anti-racism group is working to outlaw the initiative nationwide. Mouloud Aounit is President of the "Movement Against Racism and for Friendship Between People." He says the pork soup kitchens go against the very concept of solidarity.

"These extremist groups are using the soup kitchen to spread their message of hate and contempt towards Muslims. We just can't accept this form of solidarity based on discrimination."

But the SDF volunteers insist that they do not discriminate, and that anyone can eat their soup. Kamaté confirms that to be true. "At first I was told it was a private party. Then I asked the woman in charge and she allowed me to eat and drink with the others. It really helped me out because I'm homeless too and I face the same problems as the others."

One such other person is Michel Bewulf, a 37-year-old who has been living on the streets for two years, ever since he got divorced and lost his job. He enjoys the Thursday night four-course spread. "I like to come here because it's friendly. It's also very secure," he said. "People offer me jackets, trousers, socks, sometimes money and food." 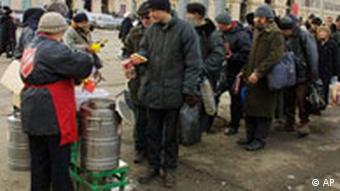 Standing in line for soup

Bewulf says other soup kitchens, where there are hundreds of people and not enough food, can be dangerous, and adds that some church groups proselytize while they serve. By contrast, he says the volunteers at the Gallic dinners don't bring up their political ideas and few of those who show up for their weekly serving of pork soup seem to care about the controversy it has stirred.

Ultimately they are just happy to be fed and to share a meal in a pleasant atmosphere, where they don't have to fight for their food or be on their guard.

In most religions, the interpretation of beliefs is left up to the men. But a group of women theologians from Germany and other European nations want to change this. (Dec. 23, 2005)

Focus on Integration in Germany After French Riots

Germany's incoming grand coalition of Christian Democrats and Social Democrats plans to pay more attention to the integration of immigrants as a result of the ongoing violence in neighboring France. (Nov. 8, 2005)