German Chancellor Angela Merkel has started her tour of North Africa where she is set to discuss migration and development in the region. Activists have called on her to also address human rights abuses. 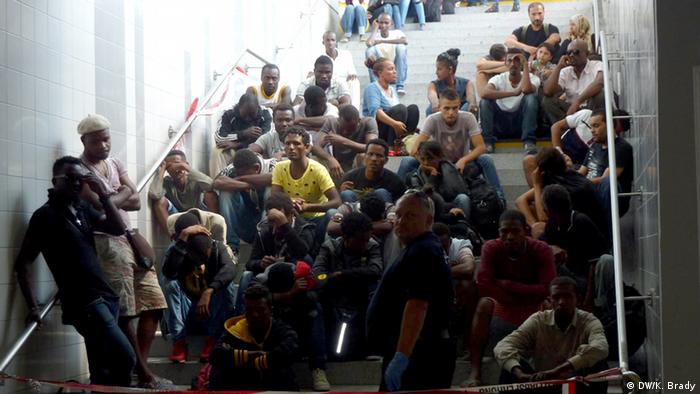 As part of her push to limit migrant flows to Europe through North Africa, German Chancellor Angela Merkel landed in Egypt on Thursday for a meeting with President Abdel-Fattah el-Sissi.

With Germany's September election fast approaching, and the anti-immigrant Alternative for Germany (AfD) still likely to enter parliament, Merkel is facing ever-growing pressure at home to reduce the number of asylum-seekers coming to Germany. Since 2015, the country has taken in more than 1 million migrants.

Public fears in Germany have been heightened as a result of several jihadi attacks last year, especially the deadly truck attack at a Berlin Christmas market in December, which was attributed to Tunisian immigrant Anis Amri.

One of the main gateways for African migrants heading for the 28-member EU bloc has been through war-torn Libya, which, since the overthrow of Moammar Gadhafi in 2011, has lacked a national government.

In response to the large number of people still making the dangerous trip across the Mediterranean Sea, Merkel's government has already urged the Maghreb states and Egypt to step up border controls and speed up repatriations of rejected asylum-seekers.

Speaking in her latest weekly podcast, Merkel said that "without a political stabilization of Libya, we won't be able to stop the human traffickers operating out of Libya who are responsible for, by far, the most arrivals in Italy.

Merkel's two-day trip to Egypt and Tunisia comes as part of a larger diplomatic push by the chancellor, who last year visited Mali, Niger and Ethiopia.

However, negotiations with the North African countries over immigration have been largely clouded by human rights concerns.

Judith Sunderland, the Europe and Central Asia director for Human Rights Watch, said, "Ensuring safe and swift returns of Tunisians and Egyptians who are not in need of protection is legitimate, as long as the procedures are fair."

"It's another thing entirely to pursue dodgy deals that could trap asylum-seekers and migrants from elsewhere in countries like Tunisia and Egypt that cannot guarantee decent treatment or meaningful access to asylum," she added.

Meanwhile, the bishop of the Coptic-Orthodox Church in Germany, Anba Damian, urged the chancellor to address the situation of the
Christian minority in Egypt.

In Cairo on December 11, 25 people were killed and almost 50 others injured in one of the most severe attacks on Coptic Christians. The suicide attack, which occurred in a church, was claimed by the so-called "Islamic State" (IS) militant group.

Following Thursday's visit to Egypt, Merkel is due to end her two-day visit with talks on Friday with Tunisian President Beji Caid Essebsi.