The German chancellor has been forced to swap planes after the one she was using was grazed by a ground vehicle. It is the latest in a line of aviation mishaps afflicting German government officials. 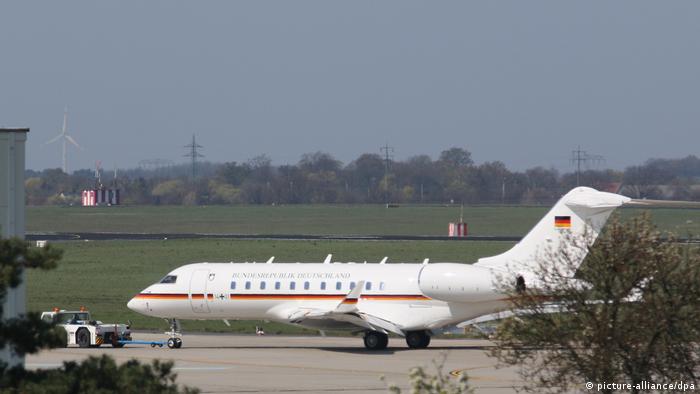 Another mishap occurred with a German government plane on Monday after a ground vehicle at Dortmund airport damaged the Bombardier Global 5000 machine German Chancellor Angela Merkel had used to fly to the western German city.

The chancellor was to fly back to Berlin on another plane from the government fleet, a spokesman for Germany's airforce said.

The plane was hit by the vehicle while stationary at the airport, after Merkel had left the aircraft, he said.

The extent of damage was not initially clear.

Merkel arrived in Wuppertal, near Dortmund, on Monday afternoon to visit the Junior University, which offers research and educational opportunities to students from four to 14 years of age. She was also there to take part in a public discussion focused on the 70th anniversary of Germany's constitution or Basic Law.

The chancellor took an active part in research activities at the university, with spokesman Steffen Seibert tweeting a video showing her with the students and the premier of the state of North Rhine-Westphalia, her Christian Democrat ally Armin Laschet.

The incident is the most recent in a series of problems affecting the German government's aging fleet of 14 planes that carry ministers and the president, which has encountered numerous problems in the past months.

In December, Chancellor Angela Merkel arrived late to the G-20 summit in Buenos Aires after her plane had mechanical problems over the Netherlands and was forced to land in the western German city of Cologne.

In January, Steinmeier arrived three hours late in Ethiopia after his plane encountered problems in Berlin. Development Minister Gerd Müller had to cancel a trip to Namibia in January during his tour of Africa due to another mechanical issue.

In February, German Foreign Minister Heiko Maas was stranded in Mali after his Airbus A319 was unable to depart due to a mechanical issue.

And in April, a plane that was to carry German President Frank-Walter Steinmeier to Stuttgart the next day almost crashed following a maintenance check.

Angela Merkel: Germany will come out 'stronger' after pandemic 3h ago

Abbas decrees first Palestinian elections in over 15 years 3h ago