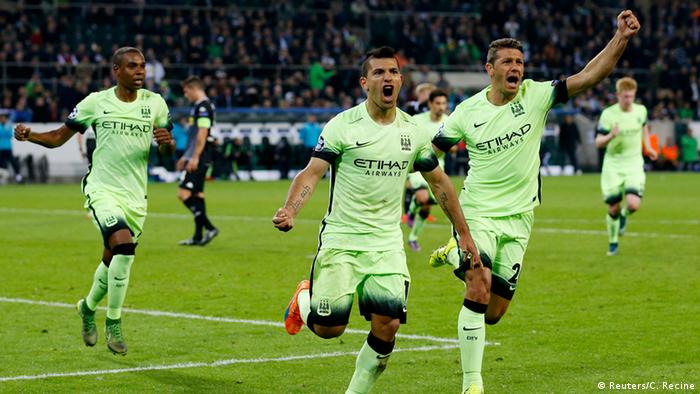 Sergio Aguero rattled in a last-minute penalty kick to secure all three points for Manuel Pellegrini's men who had cancelled out Lars Stindl's opener just past the hour mark through a scrappy goal awarded to Nicolas Otamendi.

Andre Schubert, the interim successor for Lucien Favre, has taken the Foals off the bottom of the table with two wins against Augsburg and Stuttgart. The return of Alejandro Dominguez was the only change from the weekend, while Mahmoud Dahoud was given his first Champions League start.

Gladbach's starting line up had made just 50 Champions League appearances compared to Man City's 381, but looked the most dangerous from the start. Raffael set up Patrick Herrmann in the ninth minute, although the winger couldn't capitalize on a great chance.

On 18 minutes, Joe Hart rose to the occasion, making a superb penalty save to deny Raffael who had been fouled in the box by Nicolas Otamendi. A minute later, Aguero should have punished the penalty miss, but he dragged his right-foot effort by the post.

Hart stood firm to block Raffael one-on-one in the 34th minute before the English national team keeper saved well from Herrmann who was in another excellent shooting position. Before the break, Stindl was booked for a dive in the box, although the tackle from Fernandinho had brought him down.

But Stindl redeemed himself on 54 minutes, the former Hannover captain arriving late in the penalty box and tucking the ball past Hart. Borussia-Park erupted, yet the energy seemed to dissipate within minutes as Man City took control in the middle of the park.

Eight minutes later, Otamendi fired the ball home from the edge of the box after a rebound from Martin Demichelis was cleared from behind the goal line. City had lost 4-1 at the weekend to Spurs and sat behind Manchester United at the top of the Premier League table.

But Pellegrini's men battled against a robust Gladbach side and were rewarded in the final minutes. Fabian Johnson's tired tackle against Aguero saw the Argentine go down and earn a spot-kick. The striker duly obliged and stroked the ball into the corner of the net to secure all three points for City.

Elsewhere, with their second win in a row, last season's beaten finalists Juventus secured top spot in the group on six points, while Sevilla and City both have three points each. 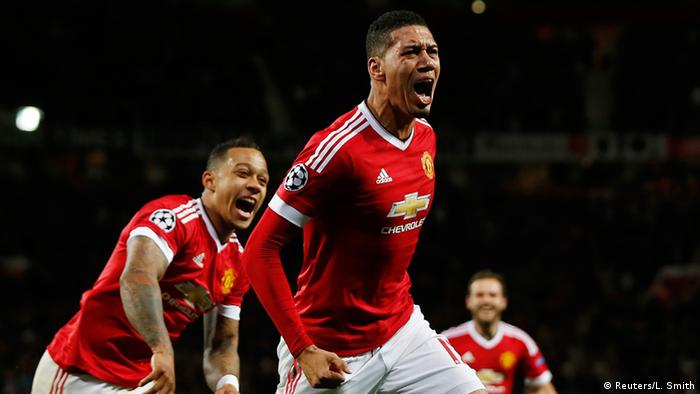 Manchester United came from behind at Old Trafford to beat Wolfsburg 2-1 and pick up their first home win in the Champions League since March 2014.

United, who top the English Premier League table ahead of rivals Man City, took most of the first half to conjure up a response to Daniel Caligiuri's goal on four minutes. Juan Mata equalized from the penalty spot before Chris Smalling scored in the Champions League for the second time in his Old Trafford career.

Bastian Schweinsteiger starred at the heart of United's midfield with Michael Carrick and Ander Herrera missing out through injury. Meanwhile, Wolfsburg are still trying to adjust to life without Kevin de Bruyne and called upon Maximilian Arnold as the only new face from the 1-1 draw at home to Hannover at the weekend.

Dieter Hecking couldn't have wished for a better start when Caligiuri finished off a superb team-move on the counterattack, which was orchestrated by Max Kruse on the edge of the box. Kruse linked with the right-sided attacker who had come off the flank and the former Freiburg ace tucked past David de Gea.

Louis van Gaal's men barely threatened until the half hour mark when Memphis Depay headed straight into Diego Benaglio's arms from close range. United leveled on 33 minutes when scorer Caligiuri was penalized for a handball in the box. Mata stepped up from 12 yards and cooly sent Diego Benaglio the wrong way.

Mata, the Spanish attacking-midfielder, was excellent throughout and dictated United's tempo in front of Germany captain Schweinsteiger and Morgan Schneiderlin. The Wolves were on the periphery of this game in the final quarter of an hour and allowed United to create clear chances after the break. Memphis Depay linked from the left-wing and crossed for Anthony Martial who should have made it 2-0.

Yet United didn't need to wait more than three minutes to take the lead. Mata sent the ball back in with a sumptuous back heel and Smalling beat the offside trap to score with a first time finish.

Hecking was already preparing a double substitution that saw the introduction of former Chelsea wide man Andre Schürrle and Nicklas Bendtner. The German almost made a telling impact, running with the ball into the box, but putting too much power on his shot from a tight angle.

But Wolfsburg's best chance towards the end was from a Ricardo Rodriguez free kick. The Swiss left back curled the ball over the wall, but the ball landed inches past De Gea's left-hand post with four minutes to play.

After United's win and CSKA Moscow's narrow win over PSV Eindhoven, all sides in Group B have three points after two matches.