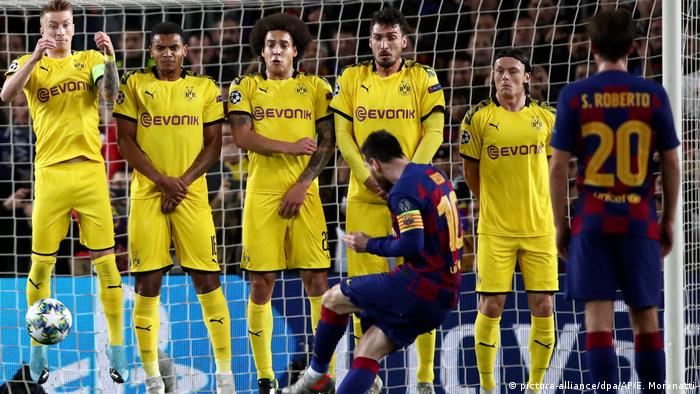 Lucien Favre’s decision to start Jadon Sancho on the bench backfired as Borussia Dortmund succumbed to a convincing defeat by Barcelona, one that ramps up the pressure on the coach.

Sancho’s omission, which one can only assume is a result of ongoing tensions between the player and the coach, was in favor of Nico Schulz, who started on the left wing with Raphael Guerreiro behind him. Dortmund’s best two early chances fell to Schulz, but he failed to convert either of them.

Instead, Barcelona took the lead through a crisp finish by Luis Suarez, who latched on to Lionel Messi’s pass and slipped the ball under the advancing Roman Bürki. Suarez turned provider moments later, playing in Messi, who found the bottom corner with ease for the second, which put daylight between the teams. 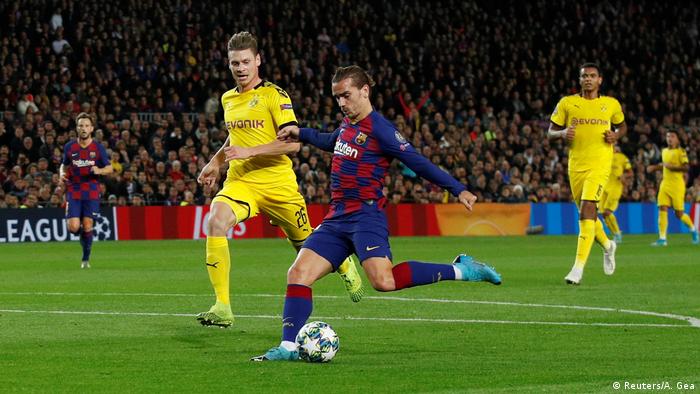 With the damage already done, Sancho was brought on at half time for Schulz and the south Londoner changed the game. Immediately more involved than the man he replaced, Sancho affected the game and linked well with Marco Reus and Julian Brandt. But it was Barcelona who grabbed the next goal, which killed it as a contest. Frenkie de Jong won it and fed Messi, whose perfect through ball was met with a clinical first-time shot by Antoine Griezmann into the bottom corner.

Sancho wasn’t done though. He collected the ball on the edge of the box and unleashed a rasping drive that flew into the top corner. That made it 3-1, and Sancho even found time to crack a shot against the bar after a wonderful fingertip save by Barca's German goakeeper Marc-andre ter Stegen.

Barcelona ran out comfortable winners though, and victory sees them finish top of the group. Dortmund are still alive though and must ensure they get a better result against Slavia Prague on December 10 than Inter Milan, who host Barcelona at the San Siro on the same night.

90' FT Barcelona 3-1 Borussia Dortmund — It's all over and Barcelona beat Dortmund comfortably to confirm their place in the last 16 as group winners. Dortmund's hopes are still alive, but it will go down to the final day.

89' Dortmund finishing the game strongly, but it's all too late. The game was lost in the first hlf, when Sancho wasn't on the field.

86' Sancho off the bar! So close to another one for Sancho as a neat passing move involving Götze sees the ball worked into the path of Sancho, who lets fly from the edge of the box — but Ter Stegen pulls off an amazing fingertip save.

80' Sancho has played like a man wanting to prove a point. Direct and lively. Exactly what Dortmund had been missing. 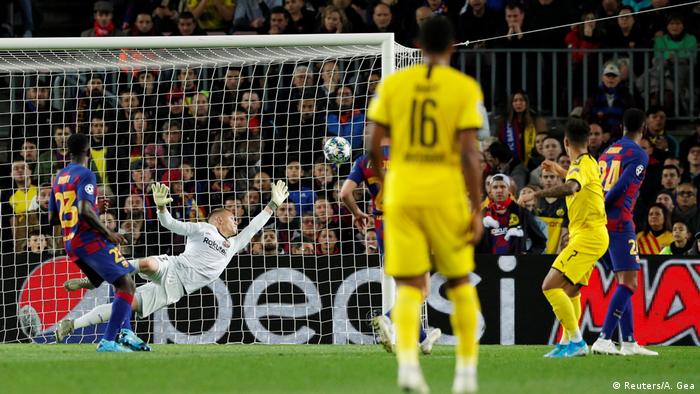 Sancho's strike for Dortmund was an absolute humdinger.

77' GOAL! Barcelona 3-1 Dortmund (Sancho) — What a strike by Sancho! Dortmund have a goal back through the man who should have started. The Englishman collects the ball on the edge of the box, shifts it onto his right foot and rifles an unstoppable rising drive into the top corner.

75' Messi grazes the top of the bar with a free-kick from the kind of angle that most players wouldn't both shooting from.

73' Guerreiro picks up a yellow card. He looks thoroughly exasperated.

70' The final half of the second half is a damage limitation exercise for Dortmund now. There's no way they can get anything from the game now, but every chance the score can get embarassing if they're not careful.

67' GOAL! Barcelona 3-0 Dortmund (Griezmann) — Game, set and match Barcelona. De Jong wins the ball and sets Messi on his way, his through ball is perfect for Griezmann, whose first-time left-foot finish is absoluately clinical inot the far bottom corner.

64' Dortmund's performance has been elevated since Sancho came on the field, there's no doubt about that. The knives will be out for Favre for his decision to omit Sancho if Dortmund lose this, which they probably will.

61' Chance Dortmund! Sancho creates the opening and slips in Brandt with a perfectly-weighted pass, but Brandt's shot is straight at Ter Stegen, who did well. But in truth the shot lacked conviction. Sancho was the architect there.

58' Dortmund get into a great position but Sancho's pass to Guerreiro, Guerreiro's pass to Weigl, and then Weigl's pass to Sancho are all awful and the move loses all of it's momentum. Really, really, bad. 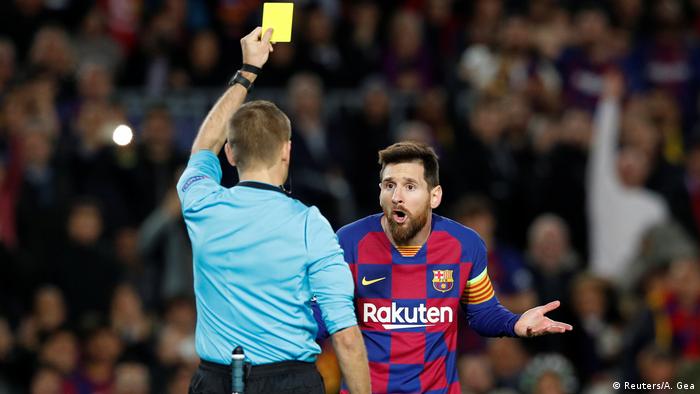 Messi is booked for diving over the challenge of Roman Bürki in search of a penalty.

56' Chance for Griezmann, who seems to lack confidence as he sees his shot saved at point blank range by Bürki. It was straigth at him, but decent stop.

54' Barcelona on the other hand are far more incisive on the attack, and Rakitic almost slips in Suarez but Akanji gets across to cover — and then plants his face into the advertising hoardings for his troubles.

52' Dortmund enjoying more possession since half time but Barcelona defending well and seem happy to soak it up.

50' Messi is booked for diving. Looked like he was tripped in the box by Bürki, but the referee did very well to spot the complete absence of contact. Messi went down looking for it, and the yellow card is correct.

48' Sancho seeing a lot of the ball in the early stages of the second half. Dortmund seem keen to get him on the ball.

46' SECOND HALF — Jadon Sancho is on for Schulz as the second half gets underway. Better late than never.

45' HT Barcelona 2-0 Borussia Dortmund — That's half-time and Barcelona are cruising after goals from Suarez and Messi. Dortmund have been useless, apart from two chances that fell to Schulz, who shouldn't be playing as a left-sided forward when Hazard and Sancho are on the bench. Lucien Favre will have some questions to answer after this.

44' Barcelona in complete control. Almost like a training session at times. This is very bad from Dortmund.

42' Messi darts into the box but this time Weigl gets back and the ball is gathered by Bürki.

39' Dortmund need to get to hlf time without suffering any more damage. 3-0 and it's curtains.

37' Suarez has a go from the edge of the box but dinks it over the bar. That was ambitious, but Barca are feeling confident against a Dortmund side who seem caught in the headlights at the moment.

35' You fear for Dortmund right now. 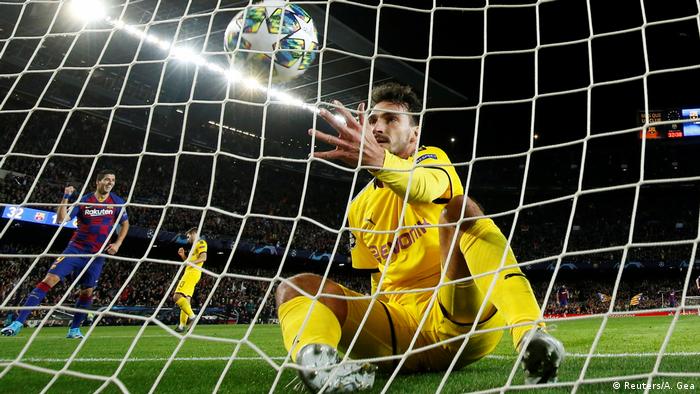 Mats Hummels ends up in the net after his pass gifted Barcelona a second.

33' GOAL! Barcelona 2-0 Dortmund (Messi) — A suicide ball by Hummels puts Suarez through, he passes the ball who Messi, and the GOAT does the rest, arrowing a shot into the bottom corner.

31' Barcelona banging on the door for a second, and Dortmund are hanging by a thread.

29' GOAL! Barcelona 1-0 Dortmund (Suarez) — The deadlock is broken. Messi the architect, of course, with the pass to Suarez, who just stays on side to tuck the ball under Bürki.

27' So many chances in this game, but somehow it's still goalless.

25' Dembele's race is run. The Barcelona winger picks up what looks like an ankle injury and is forced off against his former club. And he's in tears as he walks off the field. A tough break for the young Frenchman, who has been beset by injury since joining Barcelona. Griezmann comes on to replace his compatriot.

24' Favre should be regretting not starting Sancho, or at least Hazard. Two huge chances, and they've both fallen to the left-back.

23' What a miss Schulz! Hakimi leads a Dortmund counter-attack and rolls the ball across to Schulz. It's on a plate for him, but he hits a tame shot straight at Ter Stegen.

22' Goal Barcelona! Or is it? Suarez puts the ball into the net from Messi's pass, but the flag is up. It was close, but the right call.

20' Another weaving run by Messi that takes him from right to left, but for once he makes the wrong decision, opting to thread a difficult pass through to Rakitic when he should have shot. 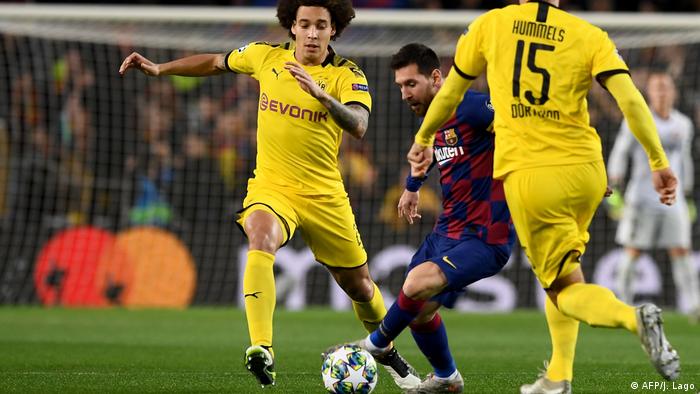 Messi running the show in the early minutes at Camp Nou.

18' Witsel takes a heavy fall and has to receive treatment. He's hobbling but looks ok to continue.

14' Another foray into the Barcelona penalty area for Dortmund, but the move involving Schulz and Guerreiro lacks purpose and breaks down.

12' Messi and Dembele linking well so far. The former finds the later, but he scuffs his shot.

10' Messi is tripped by Weigl, who was simply bamboozled by Messi's genius and chopped him down — the resulting free-kick by Messi hits his own man, Busquets, in the wall.

8' Rakitic's shot is blocked by Akanji after Messi had spotted the run of Dembele.

6' Dembele slaloms from the left wing to the edge of the Dortmund box before finding Messi, who is crowded out.

4' Since that chance, Barcelona have dominated. Dortmund back defending on the edge of their own box in numbers.

3' No offense no Schulz, but he's one of the last players Dortmund who have wanted that chance to fall to. What an opening. Sancho, anyone?

2' Massive chance for Dortmund! Oh my word, this is a huge chance as the clock ticks over the one minute mark. Rakitic loses it and Brandt breaks forward and goes right to Hakimi, who pulls it back to Schulz — but his initial shot is blocked and then the second one goes wide.

— Once again, Lucien Favre has dropped Jadon Sancho to the bench and that will only intensify the rumors of Lucien Favre's mistrust of the Englishman. ""We need players on the pitch who are focused and ready." Harsh words for a player who despite his disciplinary issues, has given Dortmund a lot last season and this. And a gutsy decision for the coach to make when he's playing Barcelona away with his job on the line.

— TEAMS! Barcelona opt to play Ousmane Dembele against his old team, and Ivan Rakitic is also in the starting line-up. Griezmann is on the bench. As for Dortmund, well I'm not sure what to make of that formation. Think Hakimi will be playing in a more attacking role. Jadon Sancho and Mario Götze are on the bench.

— Reports from journalists on the ground suggest tonight's game won't be sold out, which is a huge surprise. Those who are attending, particularly those in yellow, will make sure their voices are heard. Our man Thomas Klein has recorded Dortmund fans making their way towards the stadium.

— Lionel Messi is set to make his 700th Barca appearance tonight. In that time, he has scored 612 goals, assisted 235 more and won 34 trophies. The numbers are terrifying enough for any side, but particularly a wounded Dortmund team in desperate need of something to take home at the end of tonight.

— Hello, and wilkommen to DW's coverage of matchday five of the Champions League and Borussia Dortmund's trip to the Nou Camp.

After they fell 3-0 behind to bottom side Paderborn before coming back for a point on Friday, the pressure is firmly only Dortmund, and Lucien Favre in particular. Last time out in the Champions League they needed a similarly monumental comeback to dispose of Inter Milan.

BVB start tonight on 7 points, one behind Barcelona and three ahead of Inter, who have the marginally superior head-to-head record. All to play for.

It was a weekend of high drama at the top of the table as leaders Gladbach came unstuck, Dortmund fell apart and Bayern got back to their best. The same can't be said of Hertha Berlin, who are in big trouble. (24.11.2019)

Borussia Dortmund captain Marco Reus apologized to fans following Friday's 3-3 draw with Paderborn. The manner of performance and the result have only increased the heat on head coach Lucien Favre. (22.11.2019)