Borussia Dortmund: Flaky, fun and a team to be feared after Achraf Hakimi downs Inter

Another brace from Borussia Dortmund's Champions League charm Achraf Hakimi helped the German side to a famous 3-2 comeback. As rousing and vital as it was, the victory came with a few striking warnings. 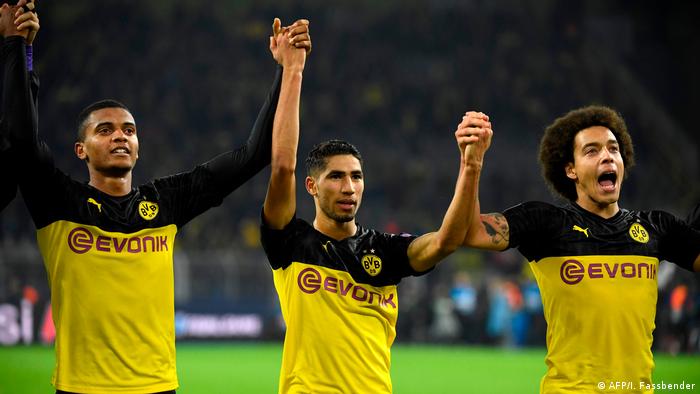 Who needs strikers when you have Achraf Hakimi? Well, for most of Wednesday, and for large parts of the season, the answer has been Borussia Dortmund.

Another Champions League double for the Moroccan, following his decisive brace against Slavia Prague on Matchday 2, inspired Lucien Favre's side to a stirring comeback win against a side that outclassed them in Milan and threatened to again in their own back yard. It's likely to take them through to the knockout stages too.

But as critical as Hakimi's two angled finishes were in the 3-2 win, Paco Alcacer's impact can't easily be dismissed. The Spanish striker, still short of match fitness, came off the bench and immediately set about making the interception that led to Julian Brandt's equalizer.

That was the goal that knocked the stuffing out of the Italians. Before that, the Serie A side had been a hard-pressing, decisive, fast-moving tornado on the counter and they blew their hosts away early on.

Manuel Akanji made an ill-advised attempt to win the ball high up the pitch, was easily spun and Lautaro Martinez streaked away from Mats Hummels, who wasn't fast enough to catch the Argentinian or streetwise enough to take a tactical booking early in the run, to give them the lead.

When Matias Vecino finished a stunningly incisive team move five minutes before the break, Dortmund looked a side who were all pretty patterns and little punch. The movement Martinez and the presence of Romelu Lukaku offered everything the home side were lacking.

For all BVB's faults though, this is a talented side with plenty of options and they eventually found the combinations to match their fancy footwork.

"We didn't play badly in the first half, not at all," insisted coach Lucien Favre. "We had our chances but didn't take them, whereas Inter took theirs. But we knew that if we scored one, we'd be ok."

They did, but it required a little luck. Hakimi's first was mishit, but suddenly the one-twos were breaking the lines and the players' tails were up.

Julian Brandt started to look like one of Germany's most gifted creators again, Jadon Sancho started to make fullbacks feel like they were watching him on a dodgy stream with a delay and Axel Witsel pumped out his chest, pumping up his team and the crowd.

Enter Alcacer. The Spaniard made a habit of scoring from the bench last season and though his name wasn't on the scoresheet this time round, his desire and anticipation made the equalizer for the revitalized Brandt.

Shortly afterwards, with the Yellow Wall now sucking the ball goalwards, Hakimi exchanged passes with Sancho before firing underneath the goalkeeper to seal the win.

Inter were done. Antonio Conte, who had done more pointing than a busy bricklayer in the opening hour, stuffed his hands in his pockets as the belief visibly drained from his players. Suddenly, it was Lucien Favre who was jumping around and gesticulating widly on the touchline.

"It feels brutally good," Brandt said post-match. "We all knew how important this game was so then when you concede two goals, it's bitter. But then to come back like that is absolute madness."

It felt that way to those packed in to the Westfalenstadion. This Dortmund side seem unlikely to be one that grinds out results, that can rely on a watertight defense and a consistency of performance.

Favre may well prefer it if they were a little more like that a little more often but their brand of "absolute madness" on a football field certainly has its charms.

One of the most memorable Bundesliga weekends saw two fierce derbies, an 8-0 win and a Bayern humbling that cost Niko Kovac his job. Timo Werner, Thorgan Hazard and Union Berlin had a better time of it on Matchday 10. (03.11.2019)

Dortmund were staring at a German Cup exit and third straight game without a goal. But Julian Brandt chose the ideal moment to announce himself in black and yellow, rescuing his team, and possibly coach, in the process. (30.10.2019)

Bayer Leverkusen will return to the Champions League next season after a three-year absence. They got over the line with a typically topsy-turvy win that highlighted the long-term strategy the club has employed.

Less than 24 hours after Borussia Dortmund's heavy defeat at home to Stuttgart, the Bundesliga club has pulled the plug on their head coach's time in charge. A long-term replacement remains unclear.