Champions League in sight for Leverkusen and Gladbach, Wolfsburg stutter

Despite an excellent start, Leverkusen and Gladbach ended up sharing the points at the BayArena with two goals before the interval. Wolfsburg, meanwhile, had 20 shots on goal but couldn't beat surprise-package Paderborn. 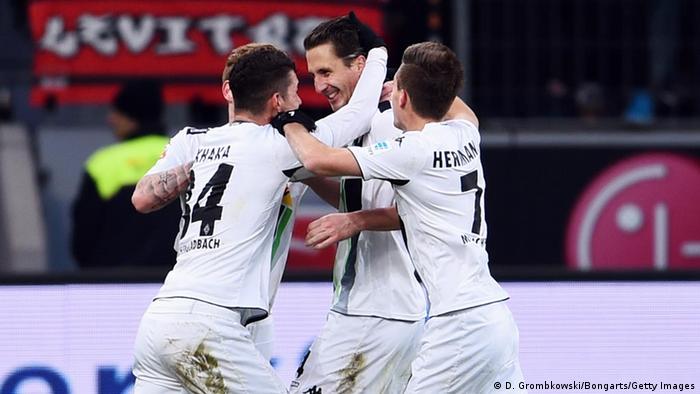 Bayer Leverkusen and Borussia Mönchengladbach were tied at 1-1 to consolidate their place at the top-end of the Bundesliga and occupy the third and fourth Champions League positions at the end of Matchday 15.

The sides offered up the perfect mixture for a top match: Leverkusen's intense high-pressing game plan against the rapid counterattacks of Gladbach. This fixture had served up a sackful of goals in the last few meetings, including a classic 6-3 win for the visitors at the BayArena in 2010.

The opening exchanges were tight and cautious, but the home side was beginning to get into their rhythm with shots coming from all angles outside the box. 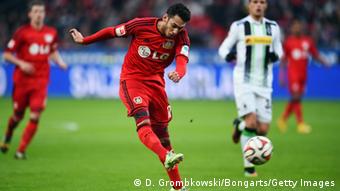 But Leverkusen, the better team early on, went ahead after 17 minutes through a long-range shot from Hakan Calhanoglu that dipped over Gladbach keeper Yann Sommer and into the top corner.

Roger Schmidt's side, normally chastised for their haphazard defending, stood up to Gladbach's dangerous forays up the pitch.

It was the first time that Raffael had been left out of the team since signing for the club. His replacement in Thorgan Hazard was lively and enthusiastic - and had a hand in the first goal.

Hazard's corner-kick was hooked into the net by the unlikely figure of Roel Brouwers whose last league goal for the Foals in 2012.

The next best chance for Lucien Favre's team would ironically fall again to the experienced central-defender who was standing in for the ill Martin Stranzl.

In the 54th minute, Hazard's dangerous corner kick took a number of bobbles before falling into Brouwers' path, but he scuffed over the crossbar from inside the six-yard box.

As Leverkusen shored up the middle of the park to counter Gladbach's threat on the break, the game became scrappier with neither team turning promising situations into clear-cut chances in the last half an hour.

It's the first away point for the Foals since a 3-0 win at Hannover in October with a home match versus Werder Bremen next up on Wednesday. 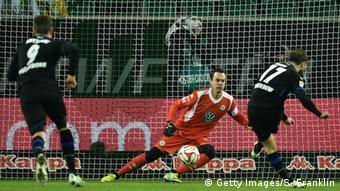 Paderborn move up to 10th

Elsewhere, an inspired performance by Paderborn's Lukas Kruse bagged a surprise point for the newly-promoted club at second-placed VfL Wolfsburg.

The 31-year-old keeper made a string of excellent saves to keep the Wolves out in the last half an hour with Alban Meha scoring from the spot-kick to equalize. An own goal from Rafa Lopez had opened the scoring for Wolfsburg in the 38th minute.

On 16 minutes, Vieirinha and Ivan Perisic combined well on the right-hand side with the Portuguese wide-man the ball towards goal only for it to take a touch off Lopez, a few yards from goal.

Dutch striker Bas Dost found a starting XI place in the team after scoring at Hannover last weekend. The towering figure, though, had a torrid time on the pitch, starting from goal on 44 minutes, which was chopped out for a foul on the defender.

But Paderborn had leveled in the 51st minute with Albanian international Meha stepping up confidently to strike home a controversial spot-kick after an alleged high-boot from Naldo inside the box.

Later, as Wolfsburg regained dominance, Dost passed up three match-winning opportunities with Kruse coming out on top in every battle.

In the 58th minute, the striker looked certain to burst the net from a few yards out, but Kruse's quick reactions blocked his route to goal.

Kruse further added to Wolfsburg's frustration saving twice from Aaron Hunt's volley and Naldo's header which was heading for the bottom corner.

As much as Wolfsburg tried, the Wolves couldn't quite kill off the game and their second-placed position is not under any compromise. Bayern Munich's lead over Wolfsburg now stands at 10 points.

Dortmund left the capital empty handed, while Bayern showed their quality against Augsburg. Werder and Hannover played out a six-goal thriller and Cologne shocked Schalke. Hamburg and Freiburg drew a blank. (13.12.2014)

Hoffenheim come out on top in Frankfurt thriller

Roberto Firmino's late winner separated Hoffenheim and Frankfurt who played out a five-goal thriller. The hosts are now joint on 23 points with four other clubs for the last Champions League place. (12.12.2014)