"Outrageous" parties and "cowardly" club officials: BVB full-back Thomas Meunier has issued scathing criticism of his former club, PSG, with whom he would have preferred to complete the current Champions League campaign. 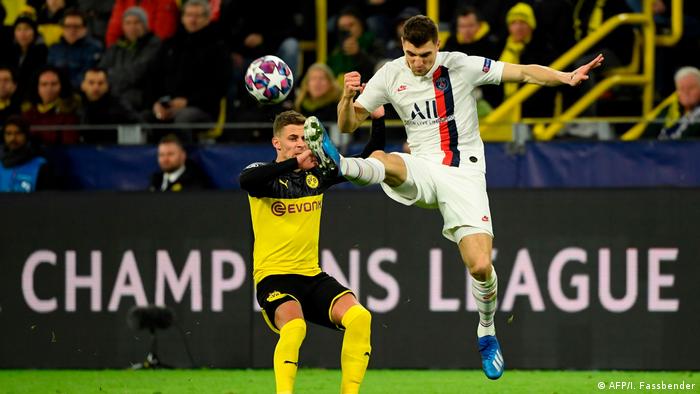 On Monday morning, Thomas Meunier boarded a flight from Dortmund to Switzerland with his new Borussia Dortmund teammates, ahead of the German club's preseason training camp in Bad Ragaz.

But despite looking forward to the new Bundesliga season, the 28-year-old would have preferred to have been in Lisbon, finishing the Champions League campaign with his former club Paris Saint-Germain, who are preparing for their quarterfinal against Atalanta on Wednesday.

"I would have liked to have played," Meunier told Belgian broadcaster RTBF. "I was with my agent in Dortmund and I was almost on my knees begging for permission to let me end the season in the Champions League with PSG."

Dortmund were reportedly prepared to let him do so, under certain conditions, but Meunier claims that PSG sporting director Leonardo "never once tried to reach an agreement with BVB, let alone with me."

Leonardo denied that, insisting that Meunier had requested his new Borussia Dortmund salary for the extra two months – "impossible," according to the Brazilian.

But the Belgian fullback says that the French club's approach was much less amiable. "I simply had to pack my bags and I received a letter from the club's lawyer which said I was no longer welcome and could no longer come to training, not even in my final week," he said. "I found that unbelievable."

No further personal talks ever took place, claims Meunier, only an email via his agent which he described as "pretty cowardly."

Meunier insists that he enjoyed his four years in the French capital and wishes his former teammates all the best, but he also made some revealing observations about life at the Qatar-owned club.

"Nothing but birthday parties – incredible," said the former Club Bruges player. "When I was at Bruges, we'd celebrate birthdays by playing darts or pool in a bar, but here it's just outrageous. But that just reflects the club: hire a palace, hire a building, parties with hundreds of people. That's when you see that they're more than footballers; they're stars.

"I always had a good time but it was all a bit extravagant and 'did you see me?' But that's part of it, part of the game."

Now the Belgian international is focusing on a new challenge in Germany. Nobody else knew at the time, but he had already put pen to paper on a move to Dortmund when PSG lost 2-1 at the Westfalenstadion in the last-16 first leg back in February before the French side eventually progressed.

"I had goosebumps during that entire game," he told German media last week. "It was the first time I had played in a stadium as big as that and in such an atmosphere. There are many more fans in Dortmund and they were all standing and screaming. I just thought: 'Wow, I'll be here next year.'"

If PSG were the hunted in France, Dortmund are the hunters in Germany – a role which Meunier suits him.

"With the squad that we have, and hopefully everyone stays, we can win something. Even this season."

Bayern Munich sealed their UEFA Champions League quarterfinals berth with a 7-1 aggregate win over Chelsea that served notice to the competition. The dream of another treble lives on for the German record titleholders.