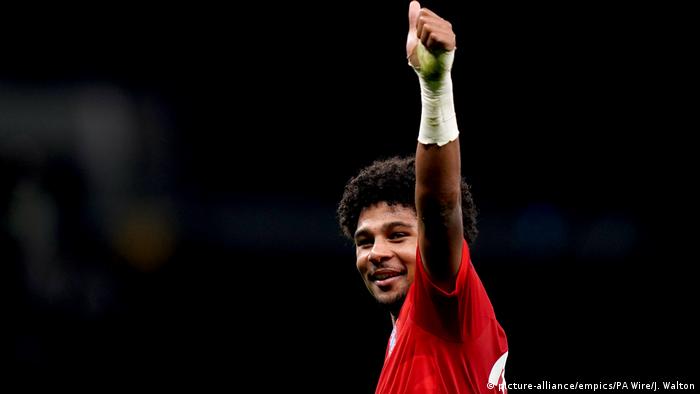 Bayern fans will be pleased to see one of their stars shining this brightly on the European stage, but his performances have much to do with his experiences in Hoffenheim, England and elsewhere.

Forwards can be a strange, egotistical breed. Knowing you’re the one people rely on for magic can make a huge difference and it appears Gnabry might be finally benefitting from that kind of status at Bayern.

Last season, Arjen Robben and Franck Ribery were still Bayern's chief creators when fit. Gnabry got plenty of game time, particularly in the league where he struck 10 times in 30 Bundesliga appearances, but much of that was down to the injury plights of the talismanic wingers. Arjen Robben and Franck Ribery played over 450 league games for Bayern, scoring 175 goals between them.

This season, things are different. Gnabry is now the first name on Niko Kovac's team sheet, regardless of the competition, and he appears to be thriving under the added responsibility. He already has five goals and four assists in eight appearances this season, well on course to smash his personal best tallies.

His dismantling of Spurs, alongside Robert Lewandowski, will only help cement his standing at the club. Bayern have left the "Robbery" era behind; the Gnabry years are finally in full swing.

He's achieved a similar status with the national team in recent months, with Germany  coach Joachim Löw revealing in September that Gnabry "will always play" when fit. The forward’s form ssince winning his first cap in 2016 has been sensational. Nine goals in 10 appearances tells its own story and Gnabry appears to be in no doubt about his importance to both his club and nation.

The fallout from Germany's World Cup humiliation in Russia has been well documented and Gnabry is one of a number of young players tasked with lifting the Nationalmannschaft back to the summit of world football – along with the likes of Leroy Sane, Kai Havertz and Timo Werner.

If the Bayern winger can maintain his excellent form into next summer's Euros, it might not be long before the ghosts of 2018 are laid to rest for good.

RB Leipzig coach Julian Nagelsmann has gradually made a name for himself as one of the most astute, tactically flexible and demanding coach's in European football. The 32-year-old is also known for his faith in and development of young players. It was with the latter in mind, particularly, that Bayern chose to send a 22-year old Gnabry on loan to Hoffenheim for the 2017-18 season, when Nagelsmann was still coaching at the southwestern German club. It would prove to be a masterstroke. 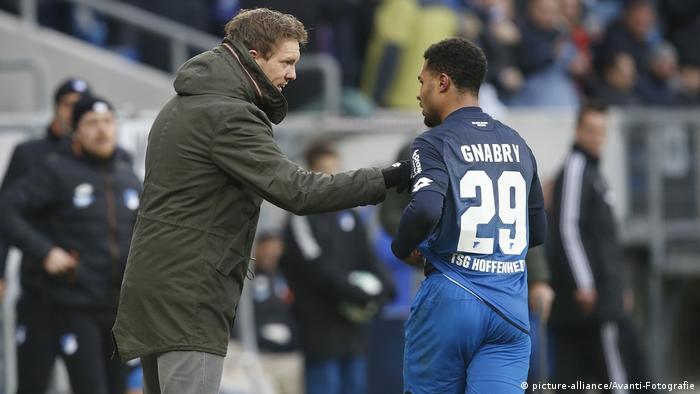 Gnabry receives instruction from Nagelsmann during a Hoffenheim game in 2018

The most impressive development under Nagelsmann's tutelage was the creative aspect of the winger’s game. Gnabry had already shown his eye for goal for Werder Bremen – where he scored 11 goals in 27 league matches after signing from Premier League side Arsenal at the start of the 16-17 season – but he wasn't so much a team player, contributing just two assists.

Under Nagelsmann, Gnabry's numbers took off, as he scored 10 and, crucially, laid-on seven despite playing five games fewer than at Bremen. Nagelsmann developed Gnabry not just as an intelligent forward player but also a teammate, a key factor behind his success at Bayern and for Germany.

"North London is RED!!!" came the tongue-in cheek tweet after his stellar performance on Wednesday, a nod to his days representing Arsenal in the Premier Legaue.

Gnabry joined Tottenham's North London rivals as a 16-year-old, believing he could develop into a world-class talent under renowned youth-development artist Arsene Wenger. It didn't work out, however, as playing time proved hard to come by during a difficult spell in Arsenal's recent history, before an ill-fated loan spell at West Bromwich Albion just about put paid to his chances of making it in the Premier League.

It was a crushing disappointment for Gnabry, who had ignored the advice of his family to remain in Germany and develop away from the spotlight, but it was a disappointment that would prove to be the making of him.

Rather than bemoaning missed opportunities, or seeking to blame Arsenal for mismanaging his development as a player, Gnabry moved to Werder and knuckled down. It was a move that would help jump start his career, and set him on the path to stardom.

He evidently understands this; his tweet on Wednesday was proof that there are no hard-feelings about his time at Arsenal, a period that will have helped feed his will to succeed.

Serge Gnabry grabbed four goals as Bayern Munich scored seven against a Tottenham side who collapsed in dramatic fashion. It was one of Bayern's biggest Champions League wins and Tottenham's worst ever defeat at home. (02.10.2019)