Bayern Munich have often been accused of an over-reliance on Robert Lewandowski. But on Tuesday Serge Gnabry stepped up to help the striker slice apart Spurs, with the pair sharing six goals. For once, Robert Lewandowski didn't appear to be the danger man.

With halftime moments away, the Polish striker, short of service in the box, had pulled wide to receive a throw in on the right. After a brilliant flick over his man, he briefly threw his arms up, seemingly frustrated by his teammates' reaction to the kind of movement and cross he'd largely been deprived of.

But suddenly, seconds before anyone else, his instincts kicked in. The 31-year-old charged back towards his own goal just as Corentin Tolisso stopped writhing on the deck long enough to help Serge Gnabry rob Tanguy Ndombele of the ball. As it broke, Lewandowski was still a step ahead, taking a touch to make space and rolling a precise sidefooter into just about the only area of the goal Hugo Lloris couldn't reach.

It turns out he was the danger man, but this time not the only one.

As the away fans belted out a joyful rendition of 'Football's Coming Home' to a rapidly emptying stadium after Serge Gnabry had helped Lewandowski cut last year's losing finalists to ribbons, it was difficult to recall just how much Bayern struggled to cope with the intensity of the Premier League side's pressing early on. After Son Heung-min had taken advantage of Tolisso's error to give Spurs an early lead, Bayern drew level thanks to a brilliantly-executed Joshua Kimmich curler but struggled to get control following that.

The momentum swung back towards the visitors from Bavaria just after the half-hour mark and it all started thanks to their striker's industry, rather than his skill. Spurs had been bullying Bayern – until Lewandowski called time and dropped back in to midfield to shoulder Winks off the ball, the diminutive midfielder bouncing off his opponent like a satsuma off a trampoline.

The move soon broke down but the message was clear. "Bayern" shouted the cluster of away fans one side of the corner flag, "Bayern" replied the other. Not the most creative lyrics but a show of unity and strength. The players in red responded with unity, strength and plenty of creativity.

"The whole team deserves my praise," said coach Niko Kovac after the game. "We played as one but Serge Gnabry's four goals is the icing on the cake. That was definitly his best game."

Plenty of those traveling will have been in London six years ago when their side beat Borussia Dortmund in the all-German Champions League final of 2013 at Wembley. Serge Gnabry probably was too, the German winger was still making his way down the road at Arsenal back then. Gnabry would barely have registered in the minds of any of the 60,000 in attendance tonight – English or German - back then but his two-minute brace, rapid and clinical in every sense, put Bayern 4-1 up after 55 minutes. By the end of the night, Gnabry ensured he won't be forgotten in either country any time soon.

First the 24-year-old played a one-two on the halfway line before driving inside, burning Toby Alderweireld for pace, throwing the silkiest of feints and lashing home past Lloris before repeating the dose with a similar effort bounced in off the post moments later. Lewandowski had made the incision, Gnabry was on hand to sprinkle the salt. 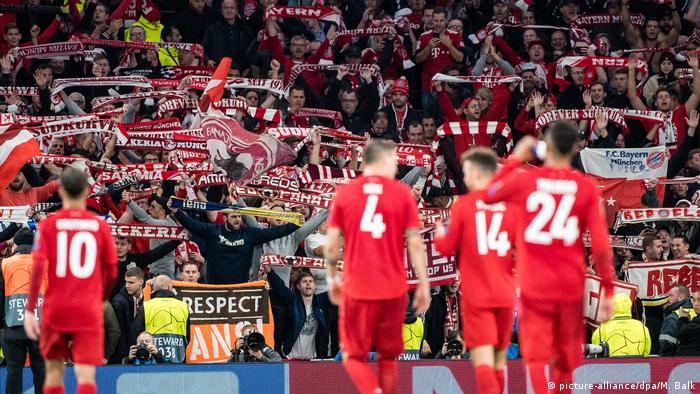 The home side, of course, have a master marksman of their own and Harry Kane soon got his moment when Kingsley Coman clipped the onrushing Danny Rose in the box. As he waited for the inevitable VAR review, Kane stood ball in hand in the penalty box, surrounded by men in red shirts. He was soon placing it on the spot and hammering it past Manuel Neuer. It was about the last time he could escape those figures in red for the rest of the evening.

That Spurs could not muster enough of a comeback to rouse their fans in the vast South Stand behind Lloris' goal perhaps speaks to their own lack of confidence. But this was a display of authority from the German champions, led by old and new, and perhaps one of their most impressive under Kovac.

Departures and decline have accounted for most of Bayern's old guard but their spearhead remains as sharp as ever, as Lewandowski proved three minutes from time when he slotted the sixth past Lloris, making a difficult first-time finish look as mundane as opening the fridge door.

As if to ensure he won the battle for the evening's top goalscorer, Gnabry added his fourth and Bayern's seventh with two minutes remaining. Yet another Munich man can place a Champions League matchball on their mantelpiece. He'll be hoping it isn't the last addition this season.

Serge Gnabry grabbed four goals as Bayern Munich scored seven against a Tottenham side who collapsed in dramatic fashion. It was Bayern's biggest ever Champions League victory and Tottenham's worst ever defeat at home. (01.10.2019)

After his preseason performances earned him praise from Bayern Munich players and staff, the 2014 World Cup winner was in the starting lineup against Dortmund. “He played a good game," Bayern coach Niko Kovac told DW. (05.08.2019)