It is rare for Bayern to allow themselves to be beaten twice in a row by the same team - as they proved with a devastating victory over Arsenal. Bayer Leverkusen, meanwhile, played out another classic against AS Roma. 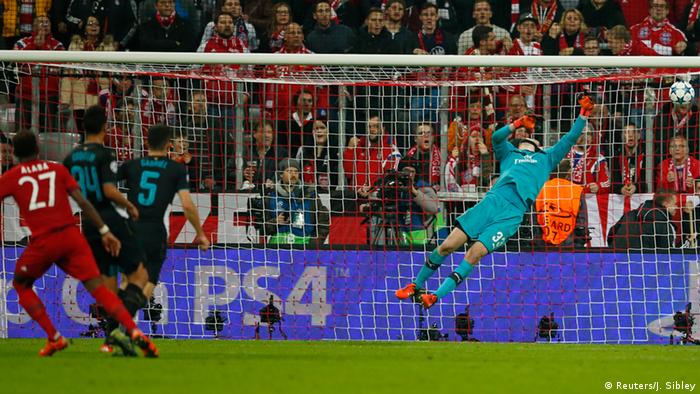 Revenge was the word most commonly used when Bayern Munich's players spoke about "welcoming" Arsenal to the Allianz Arena on Wednesday night. That payback was exactly what the German champions gave their English opponents, in a devastating one-sided match.

It took only 10 minutes for Bayern to take the lead, with Robert Lewandowski scoring just his second goal in six matches. The Polish forward timed a short run superbly to meet an equally exquisite cross from Thiago, and head home for his 20th of the season in all competitions. Mesut Özil had the ball in the Bayern net immediately after, but was ruled to have handled the ball in his finish. Bayern continued to dominate a first-half that gave Pep Guardiola's side exactly what they wanted from the game.

Just before the half-hour mark Thomas Müller doubled the home side's lead. Kingsley Coman's effort fell to the German forward after a block, and he duly slotted home from close range. Just before the break, with the game already looking well beyond the Premier League's second-placed side, Bayern made it 3-0.

David Alaba's delicious curling strike from 25-yards was the standout from an assured and ruthless first-half performance - the left-back's first goal of the season is certainly one to remember.

The second half calmed down after the break, but the Bavarians were still in total control of proceedings and again, it didn't take long for a goal to be scored. Just 37 seconds after coming off the bench, Arjen Robben smashed home at Petr Cech's near post with his first touch of the game to give Bayern a fourth.

Arsenal, though, weren't going to leave Munich without something to cheer. Olivier Giroud's outstanding overhead-kick from inside the six-yard box gave Alaba's effort a run for the goal of the night; but it was not the last. Bayern were always going to have the final say, and did so, when Müller found space on the right corner of the box and buried a powerful shot past Cech at his near post.

The win keeps Bayern top of Group F on goal difference ahead of Olympiacos, who won 2-1 against Dinamo Zagreb in the group's other fixture. The Croatian side and Arsenal are six points behind in third and fourth. 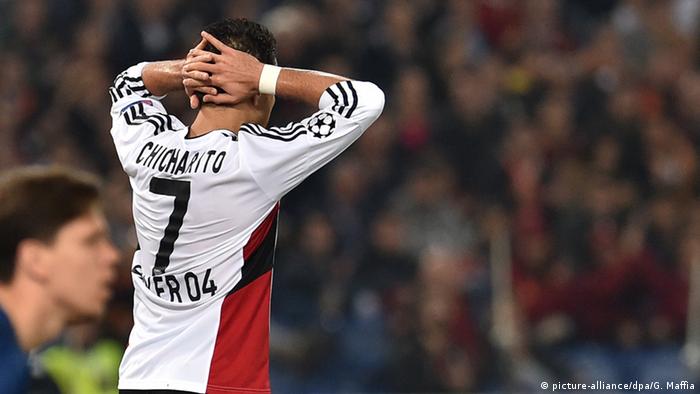 So close, but yet so far, for Bayer Leverkusen in Rome

After the incredible eight-goal spectacle that came in the BayArena on matchday three, the game in Rome was always unlikely to emulate the opening encounter between these two sides. But in another game of two halves, Bayer Leverkusen and Roma put on another superb Champions League show.

It was a first-half from hell for Roger Schmidt's side, with the hellish play beginning in the opening two minutes, as the Italians took a quick-fire lead. Leverkusen's high defensive line allowed far too much space between defense and goalkeeper, which Mohamed Salah was able to exploit after Edin Deko's through ball, squeezing it past Bernd Leno with his finish.

Before the half-hour mark it was 2-0 to the home side. While Leverkusen were pressing forward to get back into the game, Roma were turning on the heat with a superb counter-attacking style. Dzeko scored the second after Radja Nainggolan's assist.

Schmidt's half-time speech must have been powerful as his Leverkusen side started the second-half with a flash. Admir Mehmedi smashed home at Woijech Szczesny's near post following good work from Kevin Kampl to bring them back into the game and just four minutes later, the game was back to square one.

Javier Hernandez beat the offside trap with ease after Karim Bellarabi's through ball and the Mexican scored his seventh goal in his last five games with composure. Leverkusen were on top, but were struggling to complete the turnaround and with the clock ticking down, the game once again took a twist.

After a scramble in the Leverkusen box, the loose ball dropped a yard from goal, just asking to be smashed home. Salah looked certain to oblige, before Ömer Toprak pushed the Roma winger into the goal before he could score. The Bayer captain was sent off, with Roma given another chance to retake the lead from the penalty spot. Miralem Pjanic did the honors to make it 3-2 and break the travelling fans' hearts.

Despite their best efforts the German side couldn't find a second equalizer, as Roma held on to claim all three points. With Barcelona's 3-0 win over BATE Borisov, Leverkusen will have to hope that Roma slip up in one of the final two group matches to progress, while picking up points themselves.

Borussia Mönchengladbach remain in the hunt for third, despite a 1-1 draw at home to Juventus which sees them eliminated from the competition. Dutch champions PSV cruised to a 2-0 win over Wolfsburg. (03.11.2015)