CDU confirms Merkel as chairwoman and chancellor candidate | Germany| News and in-depth reporting from Berlin and beyond | DW | 06.12.2016

Germany's conservatives have re-elected Angela Merkel as their party leader but by a smaller margin than expected. The chancellor received 89.5 percent of delegate votes at the CDU's party convention in Essen.

The outcome may have been a foregone conclusion, but Angela Merkel’s margin of victory was not. After getting 96.7 percent support two years ago, the chancellor was re-elected by a shade less than 90 percent this time around - a minor embarrassment for the woman who has led the party for 16 years.

The vote came after a keynote address by Merkel that was decidedly - almost defiantly - centrist. In the days leading up to the CDU’s party convention, senior party members had struck a more conservative tone, particularly with reference to refugees. The big question ahead of Angela Merkel’s address was: would the chancellor follow suit?

Merkel began her speech by defending her most controversial policy, her welcoming stance toward refugees to Germany from crisis regions like Syria.

"Not all of the 900,000 refugees who arrived last year will be able to stay," the chancellor said. "But every single case will be reviewed."

Merkel stressed that her refugee policy was necessary to combat human traffickers and said it was a "scandal" that the war in Syria had been allowed to rage on for so long. But she also said she supported increased efforts to deport migrants whose asylum applications were rejected.

It was a nod to conservative forces within her own party as well as the CDU's Bavarian sister party, the CSU. But that was the only major concession to hardliners. The vast majority of her speech had a decidedly centrist tone - it would be over 50 minutes before she mentioned her main rivals, the Social Democrats. And she declined to refer at all - at least directly - to the anti-immigration, right-wing populist Alternative for Germany (AfD) party. 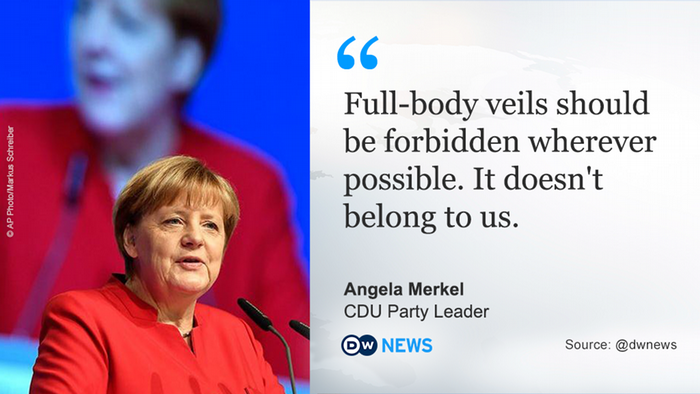 Merkel did prominently address the general feelings of insecurity that have encouraged right-wing populism in many Western countries.

"2015 was a year uniquely full of events," Merkel said. "Many people feel as though the world is coming apart at the seams."

She launched what was by her standards an emotional plea for international trade agreements like TTIP, which looks to be dead in the water since Donald Trump's election to US president. And she added that people were demanding that tax loopholes for big corporations be closed.

"People who honestly pay their taxes year in year out turn away from politics when big companies evade their tax responsibilities," Merkel said. "That has nothing to do with a socially responsible free-market economy." 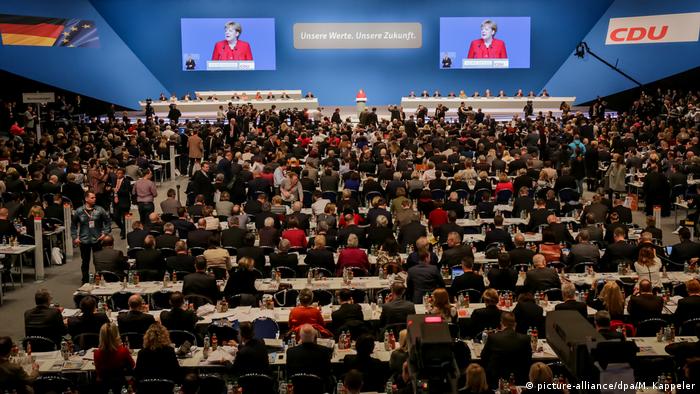 Merkel didn't get the result she wanted in Essen

Merkel said Germany would need to do more to strengthen the economy throughout the European Union. And on the Brexit, she said that she would demand that Britain respect free trade and other EU freedoms, if London wanted to remain in the European common market.

She criticized other EU member states for refusing to take a fair share of refugees to the bloc.

"2016 has made the world weaker, and we need to emerge stronger from crisis," Merkel said. "We need to do everything we can to strengthen Europe because the world does better if Europe does well. There's no returning to the world before globalization."

She said Germany needed to protect those things that made Germany and Europe stronger.

"These are our values," Merkel said. "They're our future."

The chancellor depicted the CDU as representing the center of German society. She said the party stood for respecting the dignity of all people regardless of ethnicity, gender, sexual orientation or lifestyle choices. 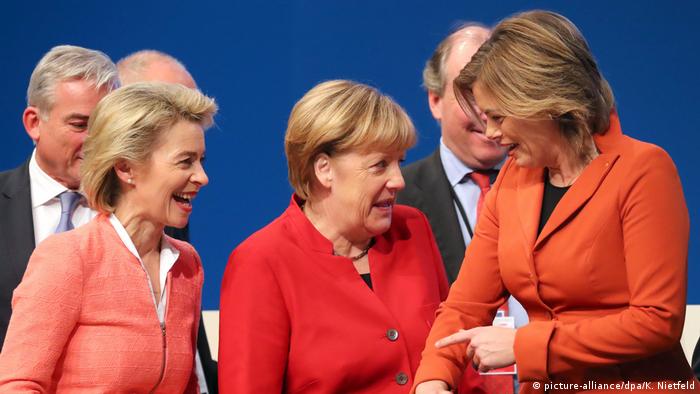 Digitalization as a great economic challenge

Merkel insisted that her previous terms in office had been a success, especially in combating unemployment and helping the German economy.

"Twelve years ago we were the sick man of Europe," the chancellor said. "That shows that intelligent politics can change things."

She said Germany was close to realizing its goal of investing 3 percent of its GDP in education and research. But she said Germany and Europe needed to confront the challenges of globalization, if they wanted to preserve their leading status in the world.

"Digitalization is the driving force of globalization and it will determine the fate of our prosperity," Merkel argued and promised to promote the expansion of broadband throughout the country, comparing Internet access to water or electricity supplies.

It's a topic that Merkel has repeatedly stressed since announcing her intention to seek a fourth term as chancellor last month.

"Politicians need to show that hard work pays off in the digital age as well," she said. 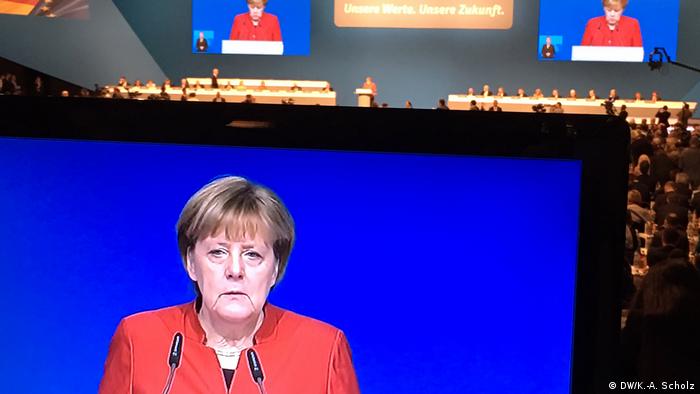 Merkel may have paid the price for her migrant policies

The first time the crowd responded with extended applause was late in the chancellor's speech, when she came out against Islamic Sharia law and the wearing of burqas.

"The full veil must be banned wherever that is legally possible," Merkel said.

But she immediately moved on to condemn hate speech on the Internet.

"All of our people determine who the German people are," Merkel said. "And not just the few, no matter how loud they might be."

That line drew the most protracted applause during the speech itself and seemed to be a jab at the AfD and European populist movements in general. Merkel used the final quarter of her address to address the need for better domestic security, but here, too, she stressed the need to work within a larger European context. And aside from repeating her pledge that refugees who don't qualify for asylum will be sent home, she didn't give any ground on her migrant policies.

Looking ahead to next year's national election, Merkel said she expected a bitter fight, presenting the CDU as the party that could prevent challenges on the (unnamed) right and a potential coalition of the SPD, the Greens and the Left Party on the left. She said that it had been a difficult decision for her to run again for CDU chairwoman after 16 years in the post and appealed to delegates for solidarity.

"You need to help me," Merkel said, again drawing extended applause from the conservative faithful. "I know I've challenged you a lot - that was unavoidable… But it's rarely the simple answers that advance our country."

The response of the roughly 1,000 convention delegates to her 1 hour, 17 minute speech was very enthusiastic, if not euphoric. But a surprising number of them decided to abstain in the vote for party chairwoman. Angela Merkel clearly still has some work to do to fire up the CDU grassroots ahead of next year's national election.

This week's CDU party convention will set the tone for Angela Merkel's campaign for a fourth term as German chancellor. The big question is how traditional conservatives will try to counter right-wing populism. (04.12.2016)

Conservative-Green coalition still on the table for German election

It may not be anyone's favorite constellation, but conservatives and Greens may have to cooperate if they want to govern. A closer look shows differences between the parties have been rapidly diminishing in recent years. (01.12.2016)