Investigators in the western German town of Ludwigshafen are still trying to determine the cause of the explosion at the BASF chemical plant. Two people were killed, one remains missing and six were severely injured. 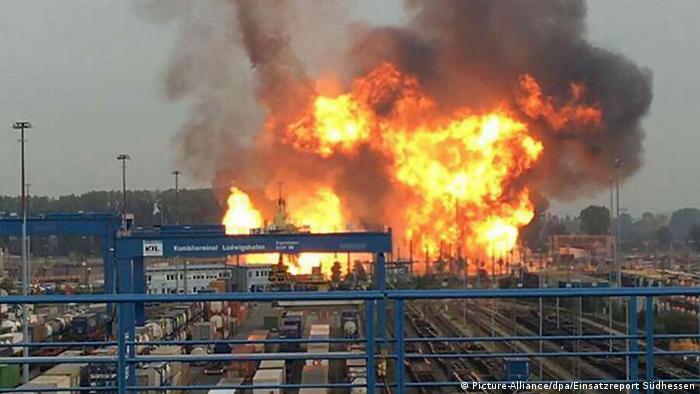 Following the severe explosion at the BASF chemical plant in Ludwigshafen on Monday, German authorities continued on Tuesday to investigate the cause of the blast which killed at least two people. Officials said terrorism has been ruled out.

At a press conference on Tuesday afternoon, Ludwigshafen fire service chief Peter Friedrich said fire services had not yet been able to reach the site of the accident.

"There's still a thick layer of foam on the pipeline where the explosion happened," Friedrich said, adding that the pipes would have to cool down before the site can be accessed.

The two people known to have died in the accident were both members of BASF's own fire brigade.

One person, thought also to be a member of the fire service, was still unaccounted for on Tuesday, while another six people remained in intensive care. Fire Chief Friedrich said the missing person is believed to be in the harbor. Divers, however, hadn't yet been able to enter the waters. A second person, who earlier in the day had also been reported as missing, has since been identified at a local hospital where they were receiving treatment.

The explosion and fire on Monday occurred at around 11:30 a.m. local time (0930 UTC) at a river harbor, used to unload flammable liquids and liquid gas.

It took firefighters 10 hours to extinguish the resulting blaze. During the incident, BASF was forced to shut down 20 facilities, including two steam crackers, which produce basic hydrocarbon chemicals used to manufacture a wide range of plastics and other chemicals.

The city of Ludwigshafen reported on Twitter that residents located near the plant were complaining of "respiratory irritation."

BASF confirmed at Tuesday's press conference that the substances that burned in the subsequent blaze included ethylene - used in producing solvents and insulation - and propylene, used in producing car paint and adhesives.

A day on since the explosion, residents in Ludwigshafen and the nearby city of Mannheim were told by authorities to continue to keep all doors and windows closed. No increases of harmful substances had been reported, however.

As a safety precaution, BASF also shut down 14 other production plants on Monday and erected water barriers between the northern inland port and the Rhine.

The economic consequences and the damage levels remain unclear.

The incident on Monday came just two years after Ludwigshafen was shaken by a devastating gas explosion, close to the BASF chemical plant. Gas transport company Gascade had been digging around a buried pipeline at the time of the blast. One excavation worker was killed and 20 other people were injured. Nearby houses and trees were burned to charcoal, leaving an entire neighborhood devastated.

Authorities in Ludwigshafen have shared a telephone hotline for those directly affected by Monday's explosion: +49 62 157 086 000.

German chemicals giant BASF has said it's had a slow start to the new business year. But despite a rather cautious outlook, the Ludwigshafen-based company said it would increase the dividend payout to shareholders. (26.02.2016)

The German chemical giant has announced it has lowered its expectations for the year as a weak commodity market continues to hurt sales and profits. The group said it was 'unlikely' it would achieve its targets. (27.10.2015)