Catholic congregations rejoice at renegade blessing of same sex couples  | Germany | News and in-depth reporting from Berlin and beyond | DW | 11.05.2021

Well over 100 Catholic priests in Germany have offered blessings to same sex couples this week. It's a sensation, and a natural decision for many, though it goes against the Vatican and the German Church's rules. Across Germany, Catholic priests have been blessing same-sex couples

"The Latin for 'bless' is 'benedicere,' literally 'to speak well of.' That definitely has something to do with recognition," Burkhard Hose tells DW. The university chaplain issued invites to the ceremony in the church of St. Augustine in Würzburg under the motto: "Wir können doch nicht anders als zu segnen" (We have no choice but to bless.)

"If we bless loving same sex couples today, then we also recognize their relationships," Hose says. "It's a piece of recognition for the realities of life, for diversity, and for the creation and the manner in which people of different sexual orientations live out their relationships. And quite simply, that's the contrast to what officially stands in the catechism."

The catechism, official Catholic teachings, refuses to recognize homosexual love and sees it as "contrary to the natural law." 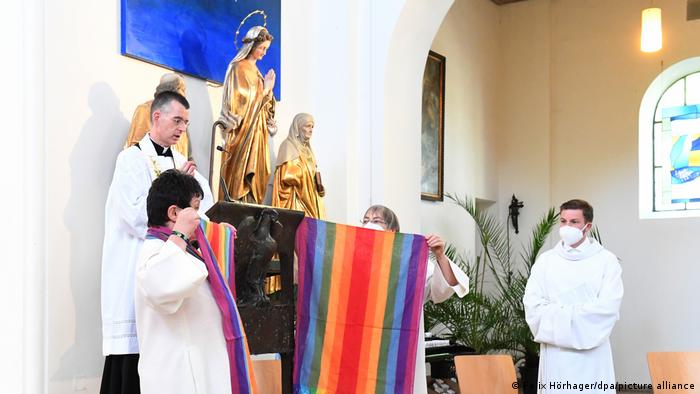 The conflict began with a surprising statement — to bishops and the laity alike — from the Congregation for the Doctrine of the Faith in Rome. The body is responsible for promulgating and defending Catholic doctrine, once formed to protect the Church from perceived heresy. It issued a sternly worded responsum (response or reply) forbidding blessings for same-sex partnerships.

The very fact that it was called a responsum speaks volumes about the Vatican's idea of dialogue, for, at that point, the question had not been asked. The Congregation put an abstract question to itself, whether the Church would authorize the blessing of "connections" between people of the same sex, and then answered definitively in the negative. Their text was, the authors stressed, "endorsed" by Pope Francis.

Outrage followed in Germany, first among individuals, but it soon spread to lay groups, priests, theologians,  and eventually several German bishops. Soon thereafter, Hose and Bernd Mönkebüscher, a priest in Hamm in the western state of North Rhine-Westphalia, called for a national day of action on May 10 under the banner and the hashtag "Love wins" (Liebe gewinnt).

Hose speaks of a "very positive atmosphere, that so many people came together to show the public an optimistic and a reconciliatory signal." The evening news was full of images of couples standing before priests, motionless but perhaps moved, as they received their blessings. 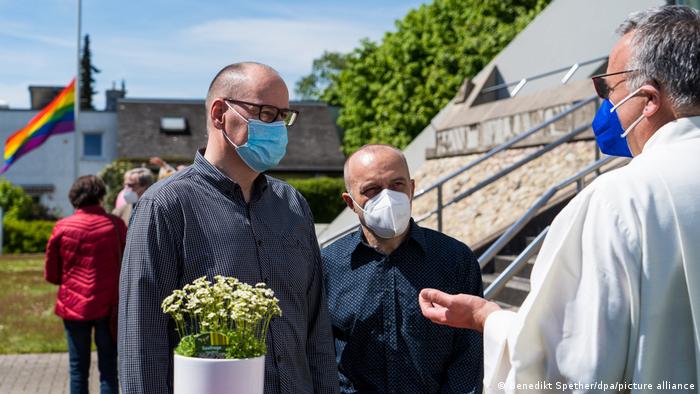 Rebellion in the land of Luther

The controversy has rumbled on ever since. It's becoming more and more clear that the Congregation for the Doctrine of the Faith, led by Spanish Cardinal Luis Ladaria Ferrer, does not approve of the reform processes being explored by the Catholic Church in Germany. That includes the so-called synodal path (synodaler Weg), a gathering of bishops and laypeople working on desired reforms. One of their leading calls is for allowing the ordination of women as priests and deacons.

This is a real no-go for the Vatican, ever since the highly conservative Pope John-Paul II "definitively" exclaimed in 1994 that the Catholic Church was not authorized to ordain women.

But the issue runs deeper. To some powerful people in the Vatican, Germany, the birthplace of reformer-in-chief and father of Protestantism Martin Luther, is still the home of the great reformation-era divider of the faith. The Roman Curia, along with conservative Catholics from Europe and the US in particular, recently said as much of the reform discussions in Germany, accusing the German Catholic Church of apostasy and of dividing the Church. Both charges were curtly rejected by German theologians.

On the other side of this divide stand a great many of the larger Church organizations in Germany, which continue rifling through the history of sexual abuse by the clergy, and the Church's handling of it, with an outrage that's still growing. Each year, thousands of Catholics are disappointedly and hopelessly turning their backs on their Churches.

International criticism of the Vatican

It's not just German Catholics wrestling with their Church's approach to same-sex couples. Bishops in several countries and continents have voiced doubt about the Vatican's hard-line stance.

The Bishop of Antwerp, Johan Bonny, who spent 10 years in the Curia himself until 2008, was probably the most explicit. He said that thousands in his diocese, overwhelmingly younger believers, wanted to leave the Church after Rome's repeated no.

As for Pope Francis himself, he has contributed notably little to the question since one of his very first "flying press conferences," heading from Europe to Brazil, when he warned against condemning same-sex couples but rejected the idea of gay marriage. According to rumors allowed to emanate from the Vatican, he had in no way endorsed the March paper from the Congregation of the Doctrine of the Faith, but that's impossible to know. Francis might be a particularly cuddly Catholic, keen to bless many things, but the 84-year-old has so far shied away from conflicts cutting right to the theological bone as pope.

For the Church, it's not just prejudice and discrimination in a celibate male world that permeates this debate, but also some of its most fundamental theological concepts. Vatican thinking is still branded by its almost immovable concept of natural law which, to oversimplify, is not easily reconciled with modernity. It's becoming ever more clear that the Church, still grappling with the questions of sexual abuse by supposedly celibate clerics the world over, struggles with the reality of creation and with the equality of all people.

Renegade in a Cassock - Father Ángel and His Open Church

Priest Burkhard Hose speaks of the "seriousness of the conflict that is currently playing out in the Church."  He is hoping for "less fearfulness, that by blessing same-sex couples in the tradition of the Church then something would be lost from the sacrament of marriage."

Next conflict days away?

The next chance to pin a little note in on the Vatican's door regarding the mood of the German flock comes as soon as this Saturday evening in Frankfurt. From Thursday through Sunday, the largely virtual annual German ecumenical church gathering is taking place. And on Saturday evening, some Catholic and Protestant groups are hosting services — crucially, including the Eucharist and the Catholic ritual of communion — with a focus on ecumenically welcoming each side. Sharing that, too, is taboo in the Vatican. Strange as this may seem, it might ruffle even more feathers than "Love wins" did.

Though Pope Francis has endorsed same-sex civil unions and LGBT+ rights, he continues to perpetuate discrimination against LGBT+ people within the clergy and laity. What's behind the contradiction?

Opinion: Catholic Church is behind on marriage equality

The renewed rejection of same-sex unions demonstrates that the once-powerful Roman Catholic Church is fast on its way to self-destruction, DW's Alexander Görlach writes.

Day two of his visit to the Gulf region has seen Scholz discuss LNG supplies in Abu Dhabi. Germany is looking to replace Russia with a myriad of different gas suppliers.