Can turnstiles save Venice from sinking? | Culture | Arts, music and lifestyle reporting from Germany | DW | 22.10.2021

Can turnstiles save Venice from sinking? 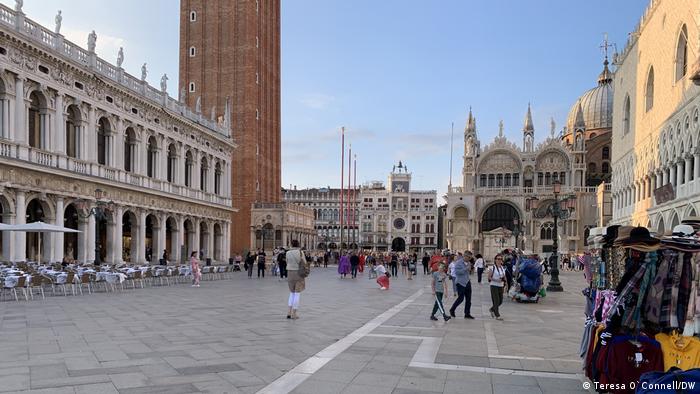 There's a digital display in the window of a historic pharmacy on Campo San Bartolomeo square — located just by Venice's famous Rialto bridge. It keeps track of the city's declining population, which is seen as a direct result of its long-standing problem with overtourism. On this sunny late-September day, the conta abitanti, or resident-counter, reads 50,582.

It's been a month since local authorities announced their controversial plans to erect electronic gates at the city's main access points to regulate tourist traffic on the popular island city. Before the pandemic, Venice had an estimated 30 million visitors per year — this equals over 590 visitors per resident. Reported peaks of 80,000 daily visitors at the height of the 2021 season made all too apparent the urgency of addressing the problem. 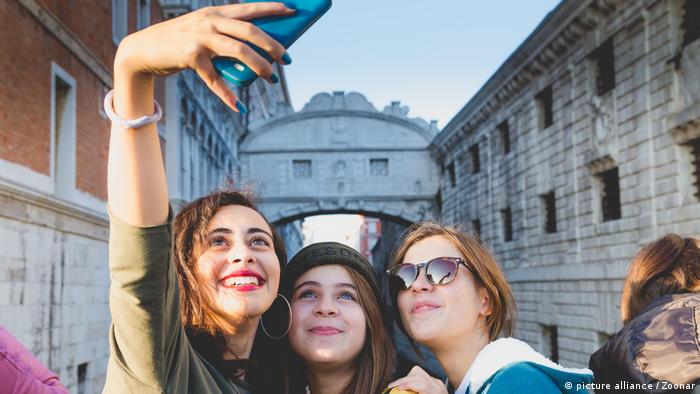 Crowds put a massive strain on the city's overstretched infrastructure. Holiday rentals drive up the cost of residential accommodation. Tourist-oriented businesses, such as pirate-themed sweet shops thrive, whilst independent ones catering to locals' needs are fast disappearing from the city center. As a result, between 2-3 people on average leave the city for good every day, reports local newspaper La Nuova di Venezia e Mestre. And this downward trend shows no sign of stopping. 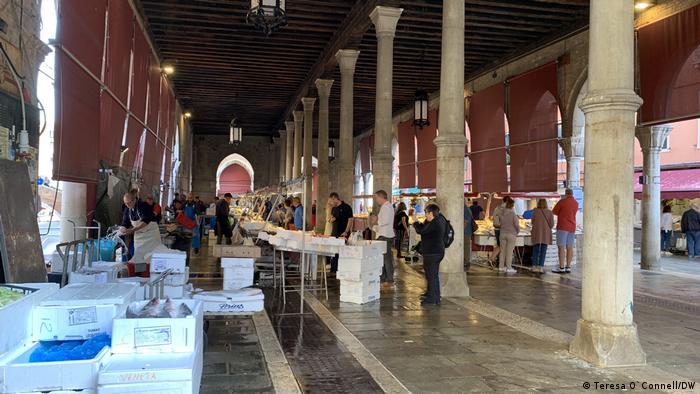 The fish market, catering to local Venetians, is a shadow of its former self

The city's combined system of charging entry fees, allowing online bookings, and installing turnstiles is meant to control tourist access to the island. Venice Mayor Luigi Brugnaro sees this as the "only solution." First tested with much controversy in 2018, the plan was then shelved due to the pandemic. It is now set to be put in place again in 2022.

But the proposal is widely unpopular, and many believe it fails to get to the bottom of the city's problems.

"The turnstiles are another attempt by the city to promote an impossible management model," argues Giacomo Sebastiano Pistolato, a local journalist and activist. "This is the final step in turning Venice into a theme park." 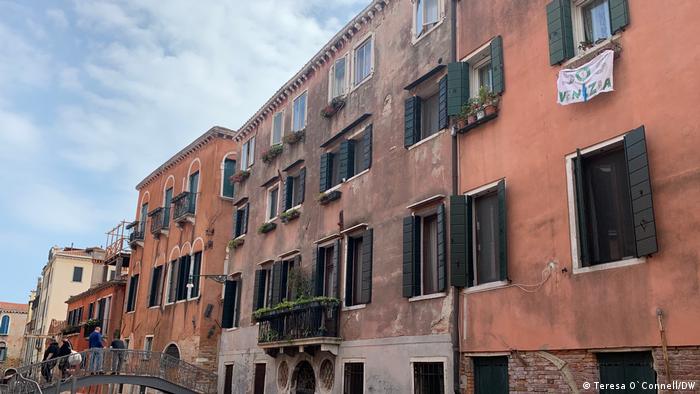 A banner reading "SOS Venezia" hangs from a window

In the first weeks of September, Italian daily Il Domani published an in-depth investigation into the city's new mobility plans, which include diversifying access points to avoid congestion along the only existing route into the city, the Ponte della Liberta. It concludes that private companies owned by Mayor Brugnaro will financially benefit from these changes. Brugnaro owns mainland property right across the historic island, which is set to be developed into a new ferry terminal by 2030. He has dismissed the paper's findings as "ridiculous," but has failed to clarify the situation.

Many here, like Giacomo, feel authorities failed to seize the pandemic as an opportunity to test and plan new strategies, and draw up a vision for the future. "We had the time and resources to think about a new model of tourism, and that's not been done," Monica Sambo, leader of the opposition Democratic Party in the city administration, told the Italian daily newspaper La Repubblica.

Instead, local authorities seem more intent on exploiting the business potential represented by the city, believes Giacomo. The 38-year-old says Venice residents don't feel heard by their leaders, although they are the ones who have to put up with the consequences of overtourism.

Recent initiatives have left a lasting impact on the city island — but it's not clear how much local authorities were actually behind them. Until this summer, cruise ships were allowed to dock on Saint Mark's square, one of Venice's most iconic and popular locations, towering over historical buildings with their endless rows of balcony-lined white decks. 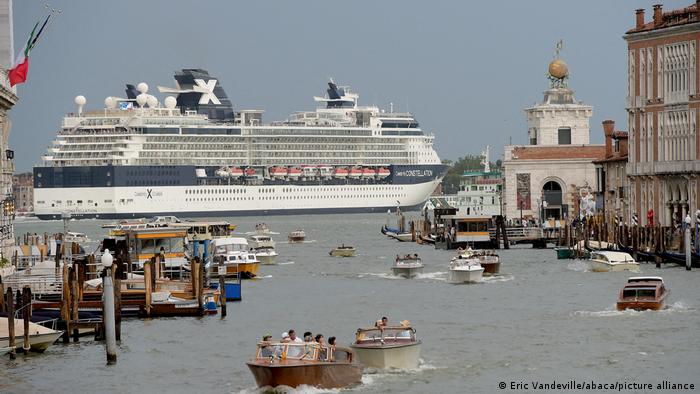 Large cruise ships are no longer permitted into Venice lagoon

In July, the Italian government in Rome — under pressure from UNESCO's threat to put Venice on its endangered list — took the momentous decision to ban large cruise ships from sailing into the center of Venice through the St Mark's Basin, the St Mark's Canal or the Giudecca Canal, from August 1.

"It's a great step forward," concedes Tommaso Cacciari, a campaigner and spokesperson for the No Grandi Navi (No Big Ships) committee. "But it's not a definitive victory."

"The government's decree includes the payment of compensation to cruise ship companies. But why should we be compensating the financial multinationals that for decades have speculated and sold off our city?" Cacciari said on local radio.

"They should be the ones to compensate the citizens of Venice for the damage, the pollution and the exploitation they've brought upon us," he added.

"This is another step in favor of Venice," said Mayor Brugnaro at the time, welcoming the news and praising it as a step towards achieving a more sustainable form of tourism. However, some locals suspect the city's administration is merely paying lip service to the "sustainability" buzzword in a bid to attract publicity — and even more tourists. 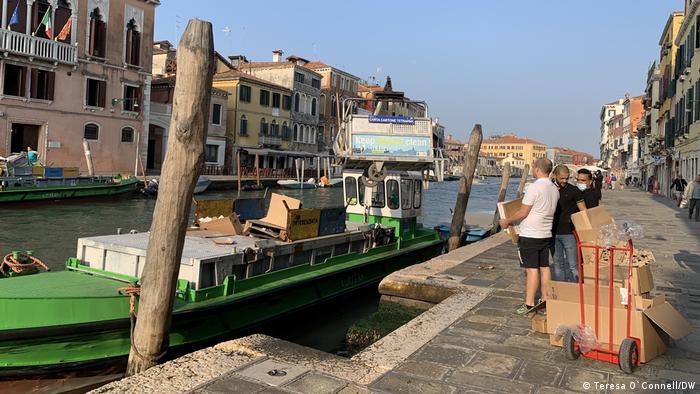 A change of narrative

Across the city, meanwhile, work is underway to put in place protections for the city's major attractions from the rising water levels. The memories of the 2019 floods are still fresh in peoples' minds. "What we need is to protect is the city's identity," says Giacomo. "And that isn't just made of monuments. It's made of and lives through its people."

"We need a change of narrative," Giacomo continues. "We need to let people know that here, it's not all a bed of roses — these are real people and real problems."