Can the cruise ship industry keep coronavirus at arm′s length? | Business| Economy and finance news from a German perspective | DW | 16.06.2020

Can the cruise ship industry keep coronavirus at arm's length?

Tourism has been one of the sectors hit hardest by the coronavirus. The pandemic has also been a blow to the cruise ship industry, with tour operators, shipowners and shipyards hurting. Is a restart possible? 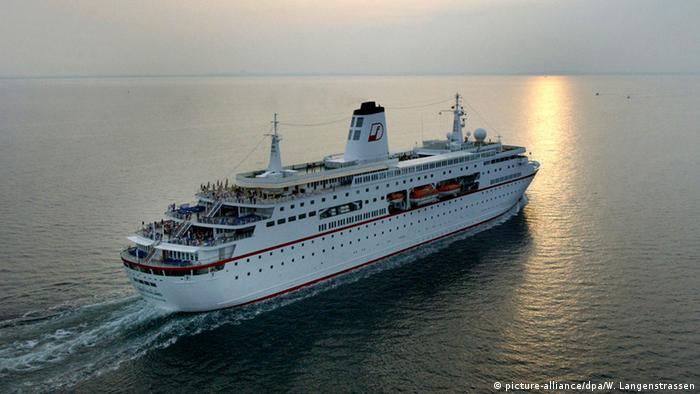 Many of us will still recall pictures of hundreds of thousands of travelers stuck on board cruise ships — holidaymakers who weren't allowed to disembark and go back home because one or many passengers had been infected by the novel coronavirus.

Knowing that your neighbor in the adjacent cabin has come down with COVID-19 is not a pleasant experience. Though some may just have had a chronic cough — who knows? But how was one supposed to know how best to avoid getting infected when other people on the same deck were never far away?

One thing's for sure: Shipowners and tour operators are bracing for a restart under different conditions. It's no longer sufficient to just accommodate and feed passengers. New strategies have to be developed to keep COVID-19 at bay.

Current indiciations suggests that cruise ships will continue to have demand for their services. For instance, TUI Cruises says it's "upbeat about the future." Spokesperson Friederike Grönemeyer told DW that "despite all the canceled tours, bookings are satisfactory for the whole year."

She added that many customers had simply rebooked their tours or were sticking to their original plans to start later in the year. Grönemeyer noted that new bookings were also coming in for later this year or 2021. Travelers are also showing interest in the 2021/22 offerings for the winter period.

The general easing of coronavirus-related restrictions will enable many cruise ships to end their forced hibernation by the end of this month, according to travel agency Kreuzfahrtberater. The latter believes the ships can be operated safely again. Managing Director Frank Riecke told DW, "There are unambiguous signs of a marked pickup in bookings."

V or U: The alphabet of the crisis

Thinking about how economies will wriggle out of the current crisis, experts have at least two potential scenarios in mind. If the crisis is severe but doesn't last too long, a swift recovery is possible — that's what economists call the V model. If nations get stuck in a valley of disruptions for a long time, the U model is used to describe the slow progression of a crisis.

TUI is optimistic that recovery is following the path of the V model, citing its customers' current booking behavior. Travel agent Kreuzfahrtberater offers a somewhat more differentiated view: "Toward the end of the year, we expect a fast recovery to kick in, but it'll take some more time to completely reach pre-COVID-19 levels again." 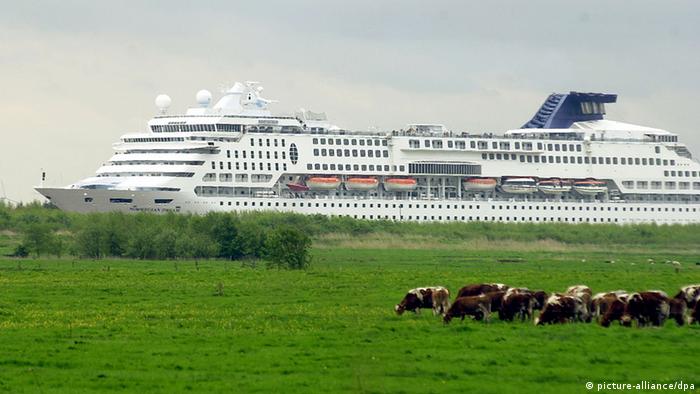 Cruise ships can be found even in inland canals. The picture shows the Norwegian Dream in northern Germany on its way to the Baltic Sea

Shipbuilders are affected less directly, but they will nonetheless face fallout from the coronavirus over time. Before shipowners place or cancel orders, they analyze the market thoroughly to avoid decisions they might later regret. Florian Feimann from the Meyer shipyard in Lower Saxony says the building of new ships is not the segment that suffers first, but that it will eventually in a protracted crisis.

The Papenburg-based Meyer shipyard delivered three cruise ships last year, aiming to do the same in 2020. Three unfinished ships are currently at the yard and cannot be sold yet because of the pandemic.

Shipbuilders there have been on short-time work since May, and cost-cutting pressures are high. Observers say the shipyard will have to reduce costs by more than €1 billion ($1.13 billion).

The Meyer shipyard is a big market player in Germany, accounting for 70% of all tonnage added in the country annually. The company has announced job cuts and wants more time to complete orders while the management is in talks with the regional government over possible state aid. Spokesman Peter Hackmann told the DPA news agency that his company "is playing it by ear."

Cruising is a social event

Unlike shipbuilders, tour operators and shipowners have to act immediately. Hygiene standards have to be enhanced onboard to minimize the risk of infections. That's no plain sailing, given that a cruise trip is a social event for many, and they want to do what others do — because others do it.

TUI's Grönemeyer says a lot has happened already. There's plenty of space aboard the fleet ships, so people don't have to bump into each other. Nonetheless, she adds, "we'll not run at full capacity." There'll also be changes during check-in as well as in the hotel and entertainment segments."

Dining can be dangerous

"All in all, passengers will be surprised to see how professionally and thoroughly the bulk of the shipowning firms are dealing with the new threat and are implementing convincing concepts to minimize the danger," said travel agent Frank Riecke.

But there will be problems that won't be easy to handle. Take the dining procedure: It isn't just there to fill people's stomachs but is also perceived as a social event. But eating your meal with others likely increases the risk of getting infected.

There are passengers for whom sitting at the largest dinner tables is an important element of their cruise trip, "but that only goes for less than 10% of all travelers," said Riecke. However, virologists keep saying that 10% is more than enough to start a new wave of infections.