Can PESCO provide a new European identity? | Europe| News and current affairs from around the continent | DW | 13.11.2017

With Brexit looming and crisis unfolding in Catalonia, the EU is in need of a renewed sense of unity. Will the Permanent Defense Cooperation reinvigorate European identity or merely paper over the cracks? 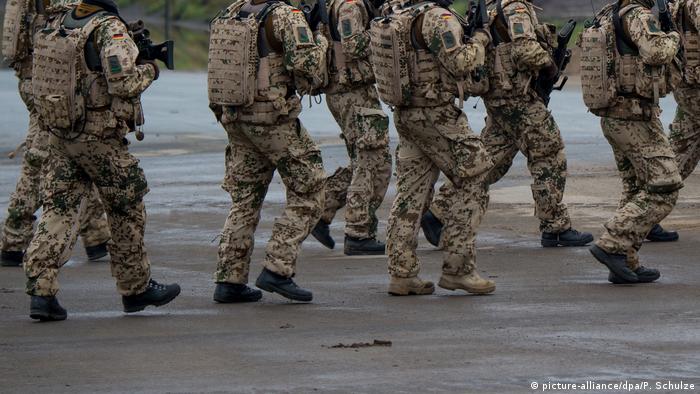 It's being heralded as a new era in European defense cooperation: European Union foreign and defense ministers finally put ink to paper Monday after years of talk about how their countries must collaborate more closely to better and more efficiently protect citizens. "Permanent structured cooperation," or PESCO, will be the most ambitious tool yet in the EU's security arsenal.

In signing a joint notification on PESCO, all EU governments except five — with Poland as a last-minute surprise signatory — pledged to share planning and operations, existing assets and expenses of acquiring major new capabilities such as military air transport, which are sorely lacking in Europe at present. Those nations who chose not to sign, even possibly post-Brexit Britain, still have the opportunity to join.

EU foreign policy chief Federica Mogherini called the "common work" on capabilities and operations that the signed agreement laid out "something big."  "This achievement today is an historic day for European defense," she said proudly at the end of the day of meetings, "but it's not only a celebrating day, it's the beginning of a story."

German Foreign Minister Sigmar Gabriel welcomed the development as smart spending. "[W]orking together is more economical than if everyone does the same," he pointed out upon arrival at the joint meeting, noting that currently the EU spends only half of what the US does on defense while achieving only 15 percent efficiency in comparison.

Similar to the constant refrain at NATO about allies' promise to devote 2 percent of GDP to defense expenditures, the PESCO agreement also requires participating nations to "regularly" increase their defense budgets, with 20 percent going to procurement and 2 percent to research and technology.

Read more: Report: Germany would rather invest in EU defense than NATO

Crediting France and Germany with bringing PESCO to fruition, German Defense Minister Ursula von der Leyen underscored that the pact is not just about the total amount of money that is spent but where and how it is used. Echoing remarks made earlier in the year by Chancellor Angela Merkel, von der Leyen said especially after Donald Trump's election, Europe must organize itself better to be self-reliant and ready to act.

"We see that nobody will resolve the security problems Europe faces in its neighboring countries for us," she said. "We have the instruments, but up until now we weren't organized to do so. If there is a crisis in a neighboring country, we have to be capable to act with political will. Today we will lay the foundation for this, hence today is a big day."

Chief Executive of the European Defence Agency (EDA) Jorge Domecq agrees with other EU officials who describe the agreement as the "sleeping beauty of the Treaty of the European Union." Now that the plan has actually been activated, Domeq says it must be maximized so that European citizens feel the bloc is providing a greater level of protection than previously. 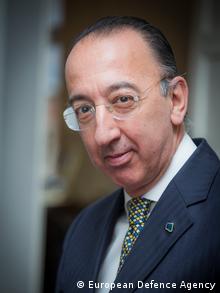 Spanish diplomat Jorge Domecq heads the European Defence Agency, which will play a prominent role in the EU's new "permanent structured cooperation", the sharing of assets, planning, budgets and operations.

"Defense figures are among the first priorities citizens give when they say what they are looking towards the EU for," Domecq told DW, asserting PESCO will "result in better and more structured European defense in all the capabilities we need to be able to act as Europe ... in defense matters and to better protect our citizens." He pointed out the increasing convergence of defense and security matters, exemplified by the fact there are army personnel patrolling the streets of many European cities alongside police.

Once EU heads of state sign off on the agreement, expected as soon as December, Domecq's agency together with Mogherini and EU military chiefs will be responsible for reviewing annual action plans outlining defense aims that now must be filed and determining whether states are meeting their commitments. Mogherini says more than 50 program ideas have already been submitted.

Alice Billon-Galland, a research fellow at the London-based European Leadership Network, agreed that PESCO's creation is indeed a positive step, indicating that all EU governments acknowledge their capability shortfalls and are finally willing to correct them collectively. That would help what Domecq describes as the EU being a "lame duck partner" for the US in NATO.

But Billon-Galland added a dose of reality. "Core disagreements on the end goal of EU defense remain," she told DW, along with gaps in threat perceptions and security priorities. "The idea that PESCO is a step towards 'European strategic autonomy' is still highly problematic to some member states" and will need to be clarified, she emphasized.

"Disagreements and obstacles have not magically disappeared, but there is definitely a window of opportunity." she said. "And the good news is that EU member states are taking action before it closes: Maybe the end of the curse of missed opportunities for EU defense?"

Domecq urges a bit of patience with the new mechanism, comparing it to the dynamics of a shared-living relationship. "It takes some time to come to terms with how you're going to run the household," he explained.

At least now EU governments are willing to share a roof.