The majority of EU nations have committed to a joint defense cooperation, focusing on military operations and investments. Europe is looking to cement unity, especially since Brexit and the election of Donald Trump. 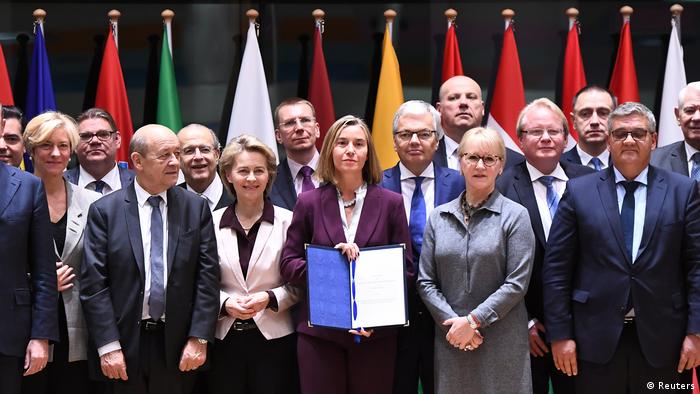 Defense and foreign ministers from 23 European Union countries signed up to a plan to establish the Permanent Structured Cooperation (PESCO), which will allow countries to cooperate more closely on security operations and building up military capability.

The decision to launch PESCO indicates Europe's move towards self-sufficiency in defense matters instead of relying solely on NATO. The EU, however, also stressed that PESCO is complimentary to NATO, in which 22 of the EU's 28 countries are members.

NATO Secretary General Jens Stoltenberg welcomed the launch, saying that he saw it as an opportunity to "strengthen the European pillar within NATO." Stoltenberg had previously urged European nations to increase their defense budget.

Under the scheme, EU member states will be able to develop greater military capabilities, invest in joint projects and increase the readiness of their troops.

With the notification signed, a final decision to launch the defense cooperation framework is expected in December.

Could a withdrawal of the US "nuclear umbrella" embolden Russia? As Europe mulls over coordinated security, German-French cooperation could form the bedrock of such future initiatives, though it wouldn't be easy. (30.05.2017)