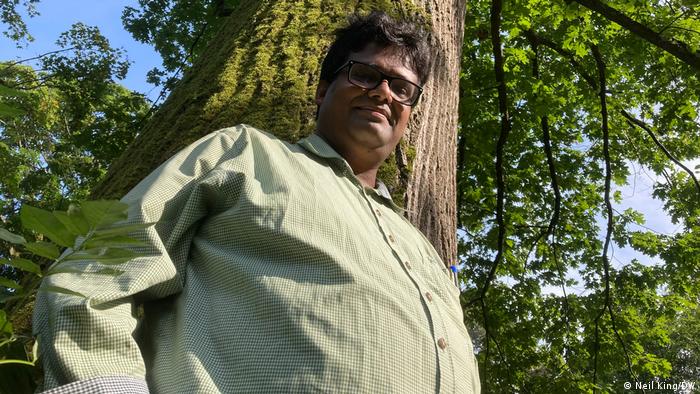 "I love my job very much," says Somidh Saha with a shy smile, as he makes his way across a forest glade towards a group of towering spruce trees. He stands in silence for a bit as he takes in the damage. The setting is Hardtwald Forest, just north of the southwestern German city of Karlsruhe.

"These trees here are dying from the top, which means they are under stress from drought. Once over half the tree's canopy is dead, it reaches a point of no return."

The 40-year-old runs his hand along the bark of a skeletal looking spruce tree whose bark is riddled with countless pin-sized holes left by bark beetles. He gently peels off a little bit of dead bark. He shows respect for the tree — even in death. Somidh Saha's name is well chosen: In Sanskrit, Somidh means wood of sacred tree species.

The call of the forest

Born in Assam, India, near the Eastern Himalayas, Saha lived in Bhutan until the age of 10.

"Growing up in Bhutan, I lived in a small house in a river valley full of lush green forest. So every morning I would actually see deer coming into our garden. It was a beautiful time."

After leaving Bhutan — a country that is sparsely populated and has about 70% forest cover — he moved to a rather treeless and crowded setting: the sprawling Indian metropolis of Kolkata. Even outside the city, he says, it was hard for him to find any trees.

In contrast to Germany, "the forests in India near the cities were all converted to villages or agricultural land," he says.

How can we save our dying forests?

So Saha lost sight of trees for a while. His parents had hoped he would become a doctor. And given how calmly and concisely he explains the cataclysmic impact climate change is having on our forests, he would have made a good one.

But drawn by nature, he got a degree in biology with a focus on zoology instead. Then one day he took part in an academic event in Jim Corbett National Park in northern India — a large forest area that was mainly established for the protection of the Bengal tiger. The trip was to change his life.

"I rediscovered my love for the forest. I completely changed my discipline and started to study forestry because I realized without the forest, we won't have any wild animals."

Saha was back in his element studying forestry in India — a field that was established there by German foresters who were hired by the British Empire.

"And that's the reason why I came to Germany to study forestry because forestry started in this country."

The impact of climate change

The health of Germany's forests has further deteriorated since Somidh Saha first arrived in Germany in 2008. Today about 80% of Germany's trees are unhealthy compared to some 70% back then.

"I was on holiday in the Black Forest this summer, and I was shocked by how many trees were dying there," said Saha, who after earning a doctorate degree in forestry at Freiburg University is now heading the forestry research project "Sylvanus" at the Karlsruhe Institute of Technology (KIT). The aim is to develop strategies to restore forests and make them more resilient to climate change impacts. 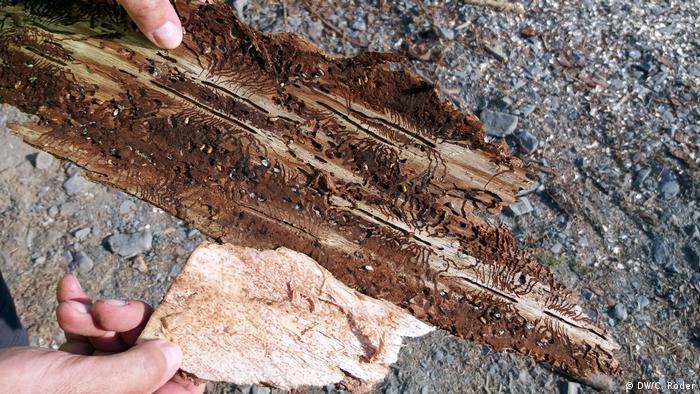 Forest dieback is intensifying because climate-change-induced droughts are becoming more frequent and more severe, rendering trees more susceptible to attacks from insects such as the bark beetle.

"What is very unusual for forest dieback in the last few years is that young trees are dying now, too," Saha says.

One-third of Germany is covered by forests (11 million hectares, 42,470 square miles). Somidh Saha is worried that if the droughts and forest dieback continue, large areas could go up in flames.

"I am very concerned that with increasing droughts our region could one day become like California or Australia. And then we will have a very big problem in this cultural landscape, where villages are interlinked with the forest."

And the prospects are even bleaker in the long term if we don't act now, he says.

The Sahara Desert used to be a lush forest region before it was slowly transformed by natural climate change, but "this transformation can happen very rapidly with anthropogenic climate change," he says.

The key to saving the forests

Saha and his team have surveyed over 3,000 trees and found that some non-native tree species are coping far better than the native ones when it comes to drought and pests. The widespread monoculture evergreen forests that Germany planted after World War II to secure timber supply are particularly hard hit.

"If we had planted mixed forest 50, 60 years ago, we would not see this huge level of mortality." This is because if you just have one tree species, a tree-specific pest, such as the bark beetle, can wipe out the entire forest if it is weakened. In mixed forests, there will always be trees that are less affected or spared completely.

But some critics warn that planting more drought-resistant foreign trees could have an unforeseen impact on biodiversity.

"I am not in favor of a direct introduction of a foreign species. Rather, we need a proper screening of that tree species because we have to avoid that this species becomes invasive." 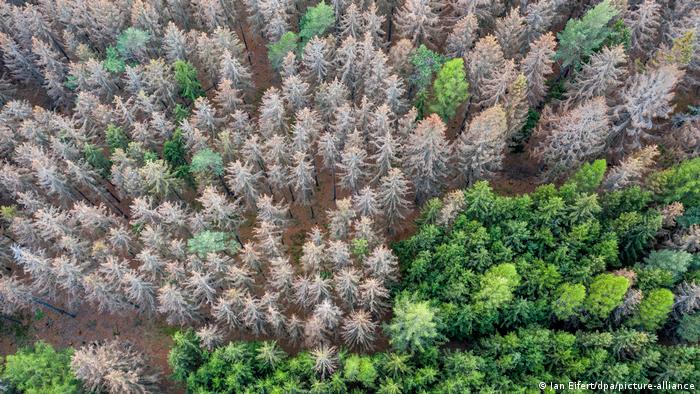 The problem is that climate change is happening so fast that there isn't sufficient time to screen a tree species thoroughly for all unwanted side effects. That is why Saha and his colleagues have been examining non-native American red oak trees planted in Karlsruhe's castle gardens some 150 years ago.

"The American red oak is more drought-resistant than many of the native species we have here," says Saha. However, in the course of their research, he and his team discovered that there is one particular species of bat that is avoiding the tree. It's not exactly clear why, but given that nine bat species live in the area, this impact on biodiversity can be considered minor, says Saha.

"There's always a tradeoff between biodiversity conservation and adaptive forest management," he concedes. However, replanting native species where even the young trees are dying is a waste of money and resources. Saha is convinced that if Germany's forests are to survive, they will need to become more diverse and the red oak tree is a very promising species to add to the mix.

"We mustn't forget that forests are not only for timber production or biodiversity conservation. They are also a place for healing. And if they are gone, then we will have a psychological problem in the future."

You can listen to Somidh Saha in the latest episode of DW's On the Green Fence podcast, here or wherever you get your podcasts.

Why are forests so valuable?

Climate change and severe droughts have weakened forests around the globe. In Germany, where many forests are planted monocultures, about 80% of trees are considered unhealthy. What's even more alarming is that the forest dieback is also affecting younger trees now. So what happens if we lose our forests? And is there anything we can do to stop it?

An elderly couple has been killed by a wildfire in a town in the southwestern US state of New Mexico, where fast-moving blazes have destroyed dozens of homes.