Can India realize its ambitious renewable energy targets? | Asia | An in-depth look at news from across the continent | DW | 01.11.2019 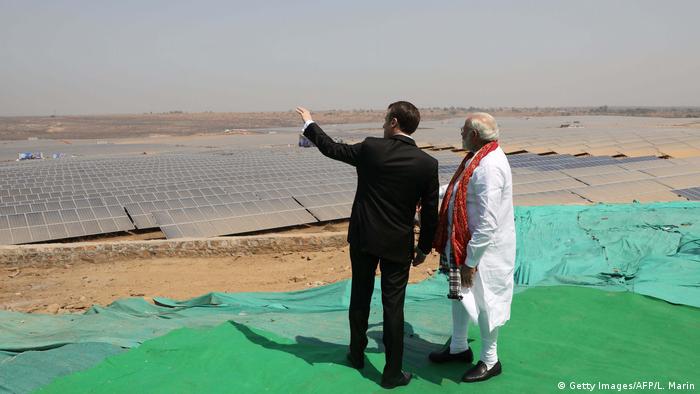 Speaking at the recently concluded UN Climate Action Summit in New York last month, Indian Prime Minister Narendra Modi gave a clarion call for a "global people's movement" to bring about a behavioral change to deal with climate change as he made a path-breaking pledge to more than double India's non-fossil fuel power generation capacity, to 450 gigawatts (GW).

India is the world's third-largest emitter of greenhouse gases, behind China and the United States. To curb emissions, Indian officials say they want to increase the share of renewables in the nation's energy mix.

Renewables currently account for 22% of India's total installed capacity of about 357 GW. And the Indian government wants to have 175 GW of renewable-based installed power capacity by 2022, and raise it further to 500 GW, or 40% of total capacity, by 2030.

"This is one of the most ambitious renewable energy targets in the world, far more than the targets set by developed countries. Overall, these targets are highly desirable, but will need major reforms in the transmission and distribution sectors and stable policies to achieve," energy and climate change expert Chandra Bhushan told DW.

India said in July it needs $330 billion (€295 billion) in investments over the next decade to power its renewable energy dream.

The investment estimate reflects the magnitude of financial challenges facing one of the world's most important growth markets for renewable energy, with government data indicating a growth slowdown in private and capital investments in the year ended March 2019.

Experts, however, say it will be hard for India to meet the ambitious targets, pointing out the slowdown in wind power and the dip in solar investments in recent years.

"Meeting 450 GW target may lead to significant grid stability issues in the absence of adequate investment in storage and in significantly upgrading the grid," said Bhushan.

This view is shared by Sunjoy Joshi, chairman of the New Delhi-based Observer Research Foundation and an expert on renewable energy. He said that grids needed to be built up to scale, not just for generation, but also for storage and absorption.

"All this needs to be balanced out. We can be confident of the clean energy targets as long as the required spadework is done," said Joshi.

In a report published last month, international rating agency Crisil cast doubts over the environment policy and the government's ability to meet its clean energy targets.

It pointed out that India will miss its ambitious goals, falling short of the 2022 target of 175 GW by at least 42%.

But India's Ministry of New and Renewable Energy dismissed the criticism, maintaining that the targets will not only be met, but also exceeded.

India might surpass the 175 GW target and achieve 225 GW of capacity by 2022, Power Minister RK Singh said last year, but did not provide an official figure at the time.

While many realize that tackling climate change is impossible without reducing greenhouse gas emissions and the reliance on fossil fuels, they say the transition to renewables is not going to be easy.

India's efforts to boost economic growth and development by rapidly industrializing and transforming itself into a manufacturing hub are set to drastically increase the demand for energy in a country that is home to about a sixth of the world's population.

People in India today also use much less energy per capita than Europeans, Americans and also Chinese. Increasing prosperity may offer these people the chance to get their households connected to the grid and lay their hands on things like refrigerators and washing machines – gadgets people in developed countries take for granted. This, in turn, will increase demand for and consumption of electricity.

But India still relies heavily on coal for its power, accounting for around 60% of its total electricity generation, and the fossil fuel remains central to its power plans.

The South Asian country, which boasts the fifth-largest coal reserves in the world, wants to make use of the cheap and abundant fossil fuel. In 2018-19, the country's coal use rose 9.1% to nearly a billion tons.

Thermal power plants, however, account for 80% of all industrial emissions of particulate matter, sulfur and nitrous oxides in India.

Environmentalists worry that India's rising use of coal will hamper the global fight against climate change, despite the country's commitment to renewable energy.

"The shift to renewable energy is not an easy transition," Sreedhar Ramamurthi of Environics Trust, a non-profit community development outfit, told DW. "While making targets of increasing renewable energy, the government must look into the concern that it does not harm the environment," he said.

For years, the Indian government has pointed to the country's lower per-capita emissions and stressed that it bears little responsibility for the enormous rise in GHG emissions since the industrial revolution.

New Delhi has also been a vocal proponent of "climate justice" – the notion that historical responsibilities as well as present-day capabilities matter greatly in shaping the climate governance regime.

But on World Environment Day this year, Modi tweeted appealing to people to "live in harmony with nature."

"We have been brought up in a tradition, where nature is equal to God. Where sanctity of nature is meaningful and where nature's protection has been put at par with humans," Modi said.

Experts say India's progress in expanding its renewable energy generation capacity will go a long way in determining how much the country's living in harmony with nature.