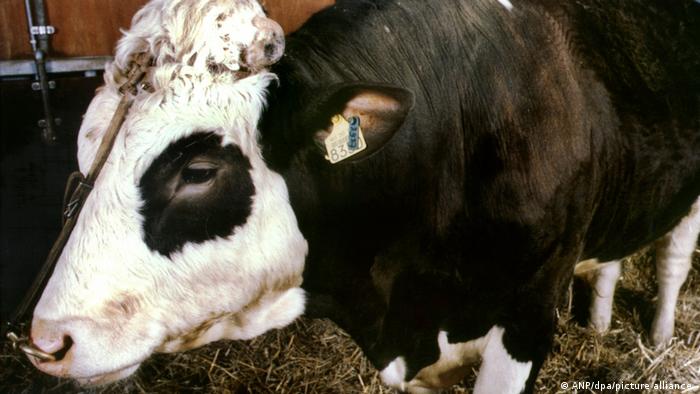 It all started in 1990 with Herman the bull. The world's first "transgenic" cow was implanted with a foreign gene, a special protein found in human breast milk. Herman survived and sired offspring that would hopefully produce milk containing the human protein.

Scientists wanted to use the milk to help develop drugs, including in the fight against AIDS. But the project failed.

Yet the dream of genetically modifying farm animals had only just begun, including the hope of bioengineering more sustainable meat and dairy products.

In the 2000s, Canadian scientists created a so-called "Enviropig," with genes altered to modify its digestion. With the animal excreting up to 66% less phosphate than ordinary pigs, the idea was to limit animal waste pollution of groundwater and rivers. But lack of funding caused the project to be discontinued in 2012.

Livestock production worldwide generates 14.5% of global greenhouse gas emissions, according to the Food and Agriculture Organization (FAO), including climate-wrecking methane, which is roughly 28 times more potent than CO2 and is produced during the digestion of plant food.

Around 20% of methane emissions from cows are related to the animal's genetic make-up. It might therefore be possible to soon reduce cattle methane emissions with the help of "gene editing," according to the US Information Technology and Innovation Foundation.

While the breakthrough has not yet been made in terms of cows, a sheep recently bred in New Zealand emits 13% less methane than the average sheep. The breeders have calculated that if all of New Zealand's 25 million sheep were replaced with this breed, it could reduce the sheep industry's methane emissions by up to just 1% annually. But the researchers say it would be "significant" as it accumulates over time.

To date, there are only two genetically modified animal species approved for consumption worldwide: The GalSafe pig and the AquAdvantage salmon, both produced in the US.

GalSafe pork does not contain alpha sugars, which cause allergic reactions in some people, but is not yet available over the counter. The company plans to use the animals primarily to produce medicines and to create alpha-sugar-free organs to transplant into humans.

AquaAdvantage salmon, on the other hand, is available to consumers in North America. By inserting genes from other marine fish into the salmon, it not only grows in spring and summer but all year round.

The genetically engineered salmon also reaches its slaughter weight twice as fast as ordinary salmon yet requires one-fifth less feed. About 70% of the fish caught worldwide is currently processed into fish feed. Researchers hope that this proportion could be reduced thanks to bioengineering.

But Mute Schimpf, a food activist with the environmental organization Friends of the Earth Europe, which opposes GMO salmon, points out the pitfalls of animal genetic engineering.

"There is a high risk that wild salmon will mix with the engineered salmon. And then in 20 years you'll find out that the salmon might have health problems," he said. "By then the whole population might be contaminated with the genes."

Genetic manipulation should not be used to increase production but "to improve the welfare of the animals," said John Dupre, chairman of the Nuffield Council on Bioethics and Professor of Philosophy at the University of Exeter.

Researchers have, for example, already succeeded in making pigs immune to the viral disease known as porcine reproductive and respiratory syndrome, and in this case genetic engineering could be justifiable, Dupre said.

Are GMO animals the key to sustainability?

But even potential benefits of genetic engineering come at a price.

Attempts in China to design more muscular pigs caused many animals to die immediately after birth, partly due to an increased incidence of umbilical hernias. As the muscle gene affects the entire body, some pigs had extremely enlarged tongues and others additional vertebrae.

For Mute Schimpf, animal genetic engineering for sustainability is the wrong approach. Addressing the climate impact of meat and dairy production can simply be achieved through reduced consumption. "We don't need more intensive animal husbandry," Schimpf said. "We need just the opposite."

While genetically modified animals are not yet approved for consumption in Europe, John Dupre warns that increased production of bioengineered meat and dairy could lead to greater meat consumption.

Scientists have long been pointing out that people in industrialized countries in particular should eat less meat overall for health reasons  — and for greater sustainability.

Supermarkets across Europe have withdrawn beef products linked to deforestation in Brazil. Corned beef, beef jerky and fresh prime cuts are among the products that won't be on some shelves much longer.

How bad is cheese for the climate?

Why phosphates damage our kidneys